Okay, well, I knew I was being optimistic about how long the Persea americana profile was going to take to write, but apparently I was even being optimistic about how optimistic I was being (Optimism: it's a slippery slope, kids.), because that's not anywhere near happening. (UPDATE: It's done.) Also, when I set up this schedule, I didn't know that the in-laws would be visiting on Saturday, so that complicated things too.

The point being that I don't have much for you today, because I haven't had much time to work, and what time I have worked was spent on a profile which is nowhere near completed, so this might not be my most interesting week. Similarly, if I owe you an e-mail or you've donated via PayPal, it could be a while before I get back to you. For which I apologize abjectly, of course.

The plant-related content today has to do with my trying to propagate my Breynia disticha. It's not so much that I wanted or needed more of them; I was just unhappy with the way my plant was getting taller without really getting any bushier, and was hoping to cut it back to induce branching. Which, when you cut back a plant, you're left with pieces of plant, and as long as I had the pieces I figured I'd try to propagate. So I put some damp vermiculite in a cup, stuck the Breynia pieces in, taped another cup over the top, and waited. And behold! Roots! 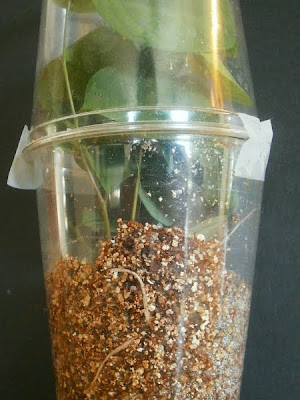 And actually it didn't take long to see new leaves and roots. I don't remember any of the dates in question, but it couldn't have taken more than two months. That is more or less in line with what everybody says about Breynia as a weedy ornamental in semitropical climates like South Florida: the davesgarden.com page on it includes many, many people complaining about the suckers and seedlings. The plant wants to reproduce very badly.

It's less enthusiastic about growing, at least indoors. My plant has been with me for roughly two and a half years (since October 2008), and I haven't always been able to keep it as wet as it would prefer. It drops leaves when it gets too dry. But it's been a robust grower and is mostly pest-free (there have been occasional minor problems with spider mites), plus it turns out to propagate readily, so I expect it to be around for at least another couple years.

I bought a Breynia disticha for my wife and had no idea what a fussy indoor plant it was. It drops leaves if you look at it funny! I, like you, discovered that water is the key, and I've been keeping it wetter. I even got it to flower once!