This has happened to me before, but it's been a while. I realize it's not a pretty flower (In fact, the actual flowers aren't even visible in the picture: Homalomena is in the aroid family, and so produces spathe-and-spadix-type inflorescences, where the actual flowers are on the spadix. Some aroids, Homalomena among them, won't even open the spathe so the flowers can be accessed, which I think is probably a matter of not being happy with the environment. I don't really know for sure.), but it still counts as one of the plants doing something this winter, so I get to blog about it, because that's how this blog thing works. 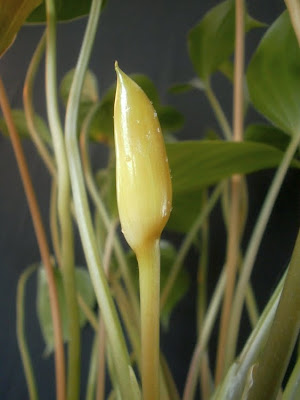 'Emerald Gem' and I have managed to get on better terms since I wrote the profile on it, and have been doing okay together for quite a while now, but even though it's doing better, it's still never looked as good as it did when I first bought it. I wouldn't necessarily recommend one for someone new to houseplants. On the other hand, there's something to be said for any plant that stays alive for me for three and a half years, too.

I'd consider myself a houseplant novice so I think I'll take your advice and wait until I have more experience for this one. Neat looking plant, though!

I enjoy the information given about the Emerald Gem. I received on three years ago as a memorial for my Mom. It started out nice and compact but now it is just huge! I'm not sure where to go with it now! It can't go outside. Will have to see I guess.
Now my brother had received one 5 years ago - it was neglected miserably. When he asked me if I could save it I had doubt. It had grown legs! The only thing I could think to do was cut the legs off dip them in rooting compound and replant. So far it seems to be working -well at least there are new baby leaves shooting up. Thanks for all your info love reading!