I got a few successful cross-pollinations between my various Schlumbergera varieties, so I will find out whether my instructions on growing them from seed in the Schlumbergera profile were any good or not. The female parent in both photos is 'Caribbean Dancer;' the male parent is probably a NOID yellow-flowering variety I bought this year. The NOID yellow formed some fruits as well, but late enough that I didn't get pictures of them for this post. (They were more or less the same color as the flowers: pale yellow.) 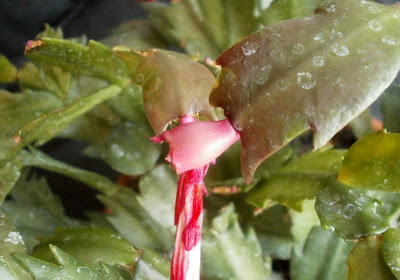 I only got one flower from the salmon variety this year, and it bloomed and died before any of the other plants' flowers were ready, so I didn't get to cross it with anything. I also bought a NOID pink and a NOID white on clearance at Lowe's, but the unopened buds on both are just sitting there: not getting any bigger, not falling off. So I think that's all the cross-pollination for this winter. Maybe in the spring, if any of them decide to bloom again. 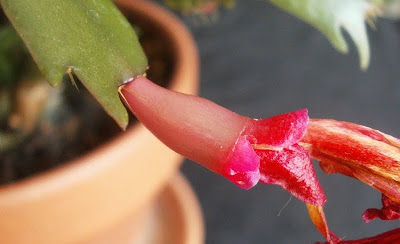 Fruit with the remains of a flower still attached.
Even with the fruits I have, the seeds will take six to twelve months to mature before I can plant them, and then the resulting seedlings will have to grow out for three or four years before I'll know whether they're worth holding onto or not. So it's kind of a long-term project, and very probably not worth the effort, but one never knows. I can think of worse things than being overrun by Schlumbergera seedlings.

If you want to speed up the process, you could micro-propagate the seed which puts seed on the fast track of becoming a plant. That's what my husband is doing with some carnivorous plant seed, and we now have a very small sarracenia plant in a jar. Apparently the effects of micro-propagation carry over into a pot, and the plants continue to grow at a fast rate. I'm very tempted to try micro-propagation with some wild seed I collect from my plants just so I can see the results quicker. While I don't grow clivia, it seems like the type of plant that should really start off in a tube - it just grows so damn slow (5 years till mature?), and mature plants are pretty spendy.

Congrats on the fruit! I actually didn't know that's what the fruit looked like, so I'm going to monitor my plants a bit more carefully from now on.

On the other hand, the fruit look delicious.

Did you do anything special to get it to set fruit? I've tried like three times with no luck.

I didn't. If you've been trying with the same plants repeatedly, you might have incompatible varieties. Also the pollen is most viable when the flowers first open, so an older flower might not be as fertile, which could explain it.