I'll admit that today's subject isn't a particularly exciting photo, but it's one of those cases where what it represents is exciting. This plant had been growing in the parent plant's pot for quite a while; I first noticed there was a pup last May.

At some point this winter, I noticed that it didn't seem to be doing so well -- the parent plant and I haven't figured out this whole winter-watering situation yet. I let it go for a long time, then water, but then when I water, a leaf or two will yellow and die. I haven't figured out whether that's because I watered, or if it's because I let it get really dry first. It's usually grown outdoors, so there's not a lot of information out there about how to do it indoors.

Anyway. So at some point I noticed that the pup seemed to be doing poorly, more so than the parent, so I pulled it out and gave it its own pot. I didn't figure the two-leafed pup would survive the winter -- bad time to transplant, it was already stressed -- but it seemed to be needing more water than what it was getting.

The news today is that the offset is growing a third leaf: 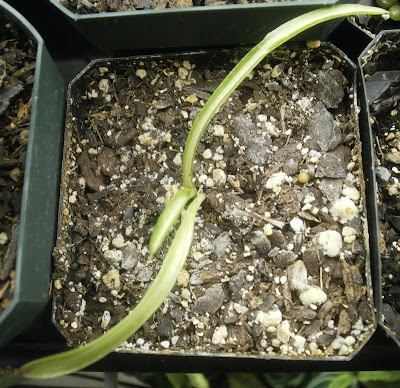 Congrats! When I bought my first Furcraea it had a small pup about this size growing extremely close to the mama plant. I attempted to separate it when I potted the big plant but I barely got any roots and it died (the pup, not the mama thankfully). So you've already had more success than I!

It's the little things that make our hearts soar...