I'm working on the Schefflera actinophylla profile, but it isn't done. Or close to done. I'll let you know. (UPDATE: Done!)

Meanwhile, I have a set of semi-recent random plant events; they're all noteworthy to me, but none of them seemed quite substantial enough to warrant its own post. 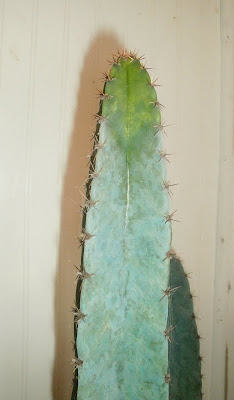 First up, one of the two very tall Cereus peruvianus plants (photo here) has decided to start growing again. I repotted them in October, which might be why. It could also be because the days have been getting longer (the one that's starting to grow is in the slightly brighter spot), or because I added fertilizer with trace nutrients just before the growth started. I don't know.

I have mixed feelings about this, since there's only just so much room left for them to grow, after which point I suppose I'll have to cut them back and start over. I've had them for seven years, so that will be quite the day. 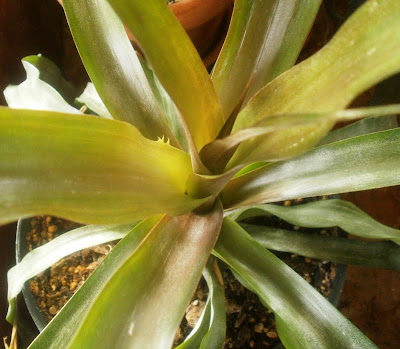 When I was writing the Ananas comosus profile, I found a number of references to the leaves having spines along the margins, but my personal plant, an A. comosus 'Mongo,' has never had any. I assumed that was just a quirk of the cultivar, until a couple weeks ago. 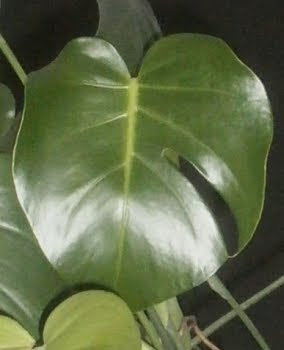 You're not going to think this is exciting at all, but -- I've had this Monstera for four and a half years, and only at the very beginning of its stay here has it ever grown split leaves. I've tried everything I could think of short of putting the plant outside (there's never been a good place to put it), but it's insisted on producing only smallish, unsplit leaves. Until now. Does this mean it's reconsidered, and is going to be making split leaves for a while? I wouldn't bet on it. But we're getting somewhere. 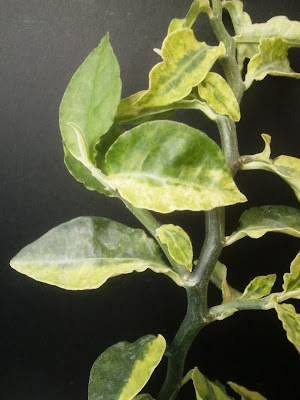 Finally, I'd started some Pedilanthus from cuttings about a year and a half ago, not long after we moved. By now, they're a respectable size, though some of them have been growing horizontally instead of vertically. (This seems to be on purpose, since they're well-rooted and get plenty of light. I have no idea what they're thinking.) This particular plant caught my eye when I was watering because, in the couple weeks since the previous watering, one of its branches has decided to revert to solid green.

The variegated variety is prettier, but I'm going to encourage and propagate this if I can anyway. I don't have a solid-green Pedilanthus yet.

Who knew cactus could break dormancy in Iowa as early as March? brrr.....

Congrats on your Monstera split! I started 9 plants last year from seed and was beyond thrilled when I saw the first split. I've read that the key is proper light, letting the plant know that it's okay to lose some photosynthetic area. Who knows if it's true, but I've seen mine produce smaller unsplit leaves when removed from light. Overall, they've all split at this point (indoors in Ohio). Maybe some truth to it.

I've had the same issue with my Monstera. When I bought it there were some huge split leaves and some with fenestrations near the midrib, but it reverted to the juvenile leaves and hasn't really put out many of the split leaves since. Solution: We really just need to move to Hawaii.

congrats on the monstera!! i've got one that seems to be doing well; it seems to like lots of sun and perks up when i give it plenty of light~ maybe more light would help??

I've been told, that the leaves split when the leaf is big enough. Enough nitrogen should do the trick. The light thing may also be true, since they start to grow split leaves when they reach the tree tops where ever it is where they grow. But I've seen huge plants in libraries and other not so well lit places with huge plants with split leaves...

I am 100% sure Monstera needs a lot of light to produce split leaves. I've seen a few examples of Monstera with huge leaves being put in dark areas... they will soon start to produce much smaller un-split leaves with much larger stems(?) inbetween the leaves, probably because it tries to grow towards the light as quickly as possible.