The first true flowers on the recently-purchased NOID Aeschynanthus have appeared. Worth the wait. 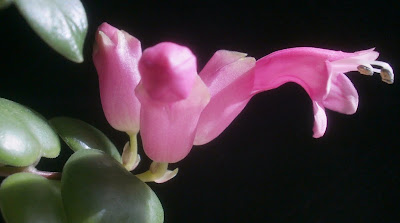 Sadly, there are no other blooming Aeschynanthus at the moment, so there's no chance of crossing the plant, but the A. longicaulis is budding now, so maybe later. 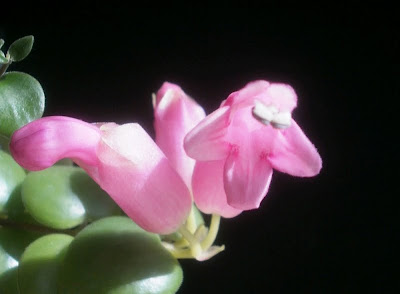 (I'm not counting on that, though, because I've been trying fairly diligently to cross the Saintpaulias lately, and so far it doesn't seem to be working: I get pollen on the stigma, time passes, the flowers die, the flower stalks wither, and that is that. I don't know what I'm doing wrong.)

I would suspect a higher minimum temperature would be necessary for seed set than for growth and flowering. 25-30°C, perhaps?

Are you using pollen from older/dried up flowers to freshly opened flowers?

(You can also store the pollen for months at a time, if you dry out the pollen sacks... works for African violets, might work for Aeschynanthus as well?)

I thought we settled that this was "Thai Pink"? Either way it's really pretty. I actually decided to go out and buy one after you posted about this one originally so the hort industry can thank you for at least one plant sale.

My guess is that the Saintpaulia crossing probs are either calcium related (unlikely given how alkaline your water is) or due to their anti-selfpollination tactics:

"In order to present (sic) self-pollination, three principal mechanisms have been developed in gesneriad flowers: (1) protandry (the pollen of the anthers ripens and is shed before the stigma of the same flower is receptive), (2) protogyny (the stigma is receptive before the pollen of the same flower is shed and no longer receptive when the pollen is shed), and (3) enantiostyly (left-right-position of the style combined with a reciprocal position of the anthers).

Oh those are so beautiful!

I hope that this is A. "Thai Pink". Why? Because I have a start of Thai Pink and I want it to look like this!

For myself, I'm pretty sure that it's the same plant that's sold as 'Thai Pink,' or at least very similar, but since it wasn't sold to me with any cultivar name, and since I'm not sure that 'Thai Pink' is the correct name for the variety, it's still sort of a NOID as far as I'm concerned. I went back and forth on calling it 'Thai Pink' in the post title, and ultimately settled on "NOID" mostly because it's shorter and the title was seeming excessively long already.

Though tomorrow's post title is going to be about twice as long, so apparently it's not something I worry about that much.

Temperature is inconsistent from day to day, but overall I don't think it ever gets colder than 68F/20C or warmer than 78F/26C. So if that's not warm enough for seed set, we're just not going to have seed set. (I do have the option of using bottom heat, I suppose, but I don't relish the idea of watering more often.)

I've been using pollen from multiple flowers of varying ages, since I don't know at what point the pollen might be at its prime. Then I've been mixing the pollen together with a paintbrush and applying it to as many stigmas as are available, regardless of age, because ditto. (I read that stigmas of newly-opened flowers are most receptive, but I figure as long as I have enough pollen to spread around, I may as well try pollinating everything.)

So far, only one time has anything appeared to happen: the base of one of the 'Shimmer Shake' flowers turned slightly redder and got bigger, briefly, but then it dried up anyway.

It's possible that the plants have sometimes had to go a day or two longer than they would have liked between waterings, though they didn't do anything visible. I just checked on them and was like holy cow, that's pretty dry. Could that be enough to cause a pollination fail?

Also, my (much older than me) boyfriend said to tell you "Nice Thai Pink!"

I don't know any other Aeschynanthus that looks remotely like 'Thai Pink'. This is 'Thai Pink.' That being said, it still doesn't tell you much since, that I know of, 'Thai Pink' is a hybrid from Thailand, and we don't know the parentage.

Your temperatures should be fine for pollination. I crossed 'Thai Pink' with A. gracilis 'Red Elf' at those temperatures and got viable seed. Sadly, the offspring have never bloomed, but I refuse to give up on them.

Hmmm, I wonder if the method used for orchids would work? With orchids it is fairly common practice to remove the pollenia from the flower, place it/them into vials or small baggies, and then put them in the fridge. Pollenia can remain viable for months in this manner. (I've even known folks to store them in the freezer.) Again, no idea if this would work for Aeschynanthus, but it might be worth trying.

I'm rather surprised you're having difficulties getting AV's to set seed. Though it has been literally years since I last bothered to do so, I don't recall having any major problems, nor did I go to any unusual lenghts. I do remember that I would remove the pollen sacs of a flower, slice the sac open with a razorblade, and then either dip several stigmas into the now exposed interior of the sac or I'd use a toothpick to scrape out some of the interior pollen and dab that onto several stigmas. I think once or twice I did try using the pollen that had naturally fallen out of the sacs.

Believe me, I'm surprised too.

There are enough pending flowers on the 'Thai Pink,' and the A. longicaulis is blooming steadily enough that I'm not worried about eventually being able to make a cross between those. If the A. speciosus gets blooming again anytime soon (it's bloomed in March before, so this could happen), I can try crossing those as well.

I grow Aeschyanthus -Mona Lisa,Columnea-Carnival,Codonanthus Gracilis and Codonatanthus succesfully in Kent UK and spotted Aeschyanthus "Thai pink" on the way to the departure gate at Bangkok airport in July-took one cutting,however it has failed to root,and so far have been unable to source in the UK or Europe.Any ideas?

Not really. For obvious reasons, I don't spend a lot of time trying to find plant sellers in Europe, and all I could do would be to Google.