In the sell/trade post, I mentioned having gotten Eucharis grandiflora bulbs but not being sure if they were any good or ready to resell. (I got them originally from easytogrowbulbs.com, and have been happy with the service from them so far, if you're interested. Currently they're selling sets of 5 bulbs for $8.95, and then shipping is almost as much again; it worked out to about $3/bulb for me. They'll only ship between March and June, so if you want bulbs from them, order soonish. If you'd rather get a plant that's already potted and sprouted and everything, I will be selling some of them later in the summer; I'm not sure when, but I'm thinking around August. I'll let you know.)

These were the bulbs when they first arrived: 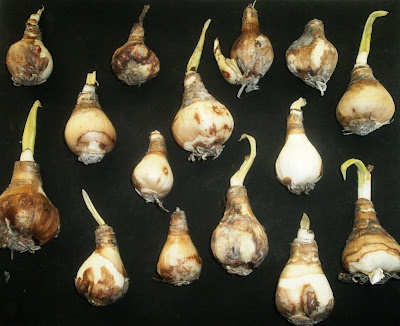 I potted them up on April 22, and here is what they looked like on May 20: 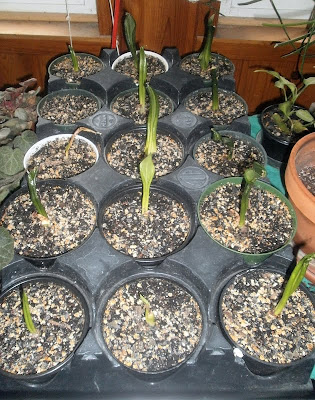 Not particularly lush or impressive, but you can still see that all but two of them (the second and third from top, in the left column) had leaves to some degree or another. One of those two now has a very small green shoot starting to emerge, so I think it's going to be fine. The other was quick out of the gate with a partly-formed green leaf above the soil, then something happened to change its mind, and the leaf turned brown. The bulb still feels firm (or at least what I can feel of it at the top, without digging it all up), so I think it's still alive, but I'm not sure whether it's going to shape up and grow again, or what the problem was in the first place. Still, though, 14/15 is not a bad success rate.

And they're growing fast now that they're fully awake: as I write this on May 30, the leaves are considerably bigger than they were in the picture above. (I apologize for the lack of photo: I originally thought I was doing a different post today.) So we've got some momentum going. I'm excited to see how big they'll get in the next couple months.

I think this is a great accomplishment and a great success rate. They're going to be beautiful!

Are these very difficult to grow where you are? Wish I were close to you so I can trade some of my Amazon lily bulbs for something else I don't have! Sigh!

They're not cold-hardy enough to grow outside, but I've found them very easy to grow inside.