My orchid problems continue -- the most recent development is the discovery that the Sophrolaeliocattleya I bought last winter had an impressively developed scale infestation (under a leaf, in a spot that was only visible from one angle -- and apparently I never looked from that angle in the last few months), so it's gone in the trash. I mean, I was looking for an excuse to get rid of it anyway, so.

The others have (after inspection for scale; I didn't find any) been relocated to the living room, where they will receive better air circulation, though it'll be drier air, and better light, and a more consistent watering schedule. And we'll see how that goes. Those of you who were hoping for a PATSP orchid giveaway should take heart; I'm still kind of hoping for one too. I just can't give them away while I think I could try something else to rehabilitate them, so we're making a small effort at rehabilitation. If/when it fails, then the giveaway will happen.

Meanwhile, we have photos from the orchid show in March, and I have to say, this is one of the most incredible orchids I have ever seen. 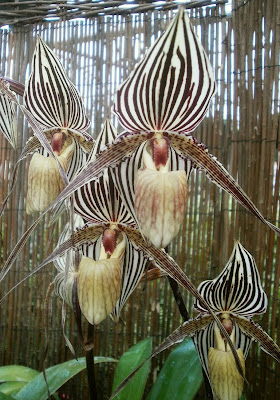 I do kinda wish that they'd used a different background for their display -- it sort of echoes the coloration of the plant, admittedly, which might be a cool effect, but it's a close enough match that it also sort of blurs the line between plant and background. 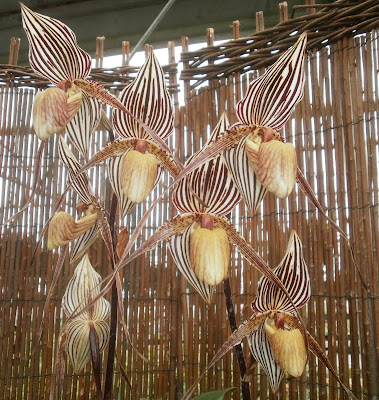 What an amazing flower. I'm not even tempted to own it, because I already know I can't grow Paphs. And I do agree, the flowers would have looked more impressive against a black, dark blue, or even eggplant-purple background.

To the other problem... Scale from my friend's collection eventually did in most of the collection after I adopted it--together with my inexpert conditions, no doubt--slow, creeping death and despair. Alas.

Thanks for sharing. Sometimes I think people go overboard for orchids, but this flower is a work of art.

Supplementary: if it rains on this orchid will it rain for 40 days afterward?

I put my orchids out on the balcony for the summer, and if I forget to bring them in in time in the autumn, so be it. Won't be sorry about losing them. I know why I don't ever buy any at full price.

Appears to be a form of Paphiopedilum rothschildianum - or perhaps a hybrid.