I almost got a good photo of Nina this week, but when I opened the top of the cage to get a better, less hard-water-stained angle, she skittered away into the underbrush. The terrarium underbrush is presently about 180% Pellionia pulchra. It's probably about time to cut those back again. So today's picture is of Sheba, once more: 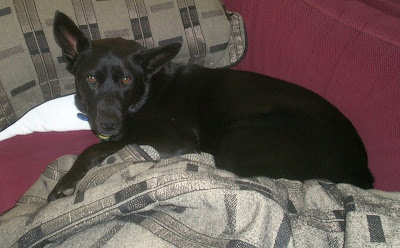 Sheba's had a fairly normal week, though we did take her to Southeast Iowa on Sunday, to see my sister-in-law and a number of her friends. There were many people around, most of whom she hadn't met before, and some of them were even small children and teenagers, and Sheba was fine throughout (to the point where multiple people commented on how well-behaved she was).

There were only two moments where she wasn't doing well: in one case, a small child got up directly in her face and was also touching her head (Sheba growled, showed her teeth, and swung her head away, but didn't snap at the kid), and in the other, a second dog was involved, and the second dog started growling at Sheba first. That was odd, because they'd met before, and had gotten along okay then. Granted, that was close to a year ago, and they didn't get close enough to one another to smell each other; there was just a lot of barking and whining and straining at the leash and stuff. But otherwise, she spent a lot of time in the car, met lots of strangers (including one previously-unmet dog), and was mostly fine.

Both of those instances sound like it was perfectly reasonable for Sheba to act up a bit. Sounds like the kid needs to be taught how to act around dogs.