Still working on the Fittonia profile; I spent more time than anticipated watering yesterday, so it's mostly written but still a little rough. It'll be posted Sunday instead, I can almost promise. (UPDATE: It was.) Meanwhile, I want to show you this adorable little Huernia zebrina I got via trade last week: 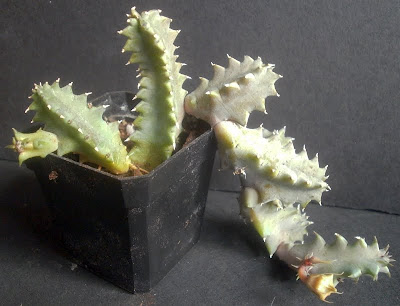 The picture was taken immediately after it arrived on June 2; the flower bud has since withered, which is a shame, but not entirely unexpected. (I've had more than my share of Stapelia buds abort too, and the plant had just been through the postal system.) I assume I'll see a flower at some point regardless. Meanwhile you can check out this picture of someone else's flower, which is probably better than any photo I'll ever get anyway.

I haven't had a Huernia before; I was planning on treating it more or less like the Stapelia. If any readers have grown both and found their needs to be distinct, I'd appreciate a heads-up in the comments. (The person who sent it to me has only grown Huernia; I've only grown Stapelia. So neither of us have a good sense of how/whether they might differ.)

As far as it goes, too, I still have plants available to sell or trade, if people are interested. A few things have been taken off the availability list (Salvia elegans, Carica papaya, Polyscias fruticosa 'Elegans'); a few things have been added to it (Peperomia obtusifolia variegata, Hoya carnosa).

I would still really, really like to give away the Anthurium podophyllum to someone with a tropical climate or greenhouse who'd pay the shipping cost -- one of you surely must fit that description. It's unhappy, granted, and unattractive, but I'm sure it would shape up if it was getting more warmth and light. Anybody?

My boyfriend bought a few of those 2 years back and they are ridiculously low maintenance, almost as low as Kalanchoe daigremontiana. We've kept them in varying conditions; indoor/outdoor, room temp/blistering outdoor heat, humid/dry, and all seem to work.

They seem to flower most/easiest in indirect sunlight and in temps between 60 and 85*. However, they are also not very long lived despite propagating readily. They usually drop off after flowering a few times unless it's a very established 'clump'.

Cool little plant! Last fall I got on a Stapelia and Huernia kick and ordered 5 different species on ebay. I think I have 3 that survived my care... One of them kept rotting on me, so I would cut off the mushy part and put the firm part in dry soil, but it, too, would rot out.
One of the plants that survived (Huernia penzigii) is putting out a lot of new growth this year, so I've got my fingers crossed!

I'm growing Huernia pillansii right next to other members of the family like Stapelia, Caraluma, Duvallia and Hoodia. They don't seem to have any special needs, getting watered once a week if i remember and sitting in bright indirect light.

A friend of mine who has a nursery is having trouble with the entire family though, and his plants are constantly rotting off. We think it's probably down to them having a sensitivity to humidity. I would imagine that with sharp drainage most plants are fine, and mine sit above a radiator and seem to like the dry air.

Once plants have climbed over the side of the pot they can be propagated or potted on. Plants root straight out of the stems and I should imagine they are probably easier to root by layering than by severing parts and leaving to dry, etc.

My Huernia hystrix arrived yesterday. I am very excited.