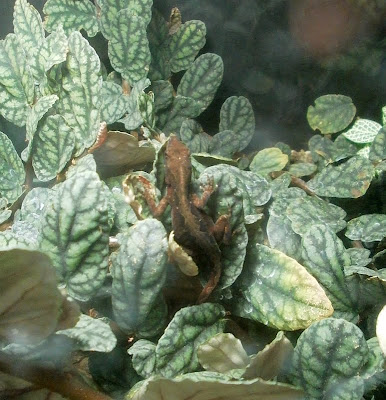 I don't post pictures of her that often, mostly out of embarrassment at how water-spotted her walls have gotten, but Nina is still here, and is doing as well as she ever was, as far as I can tell. The Pellionia has more or less taken over the tank, being more drought-tolerant than the Fittonia (though the Fittonia is still in there, which is good, because the cuttings I tried to take have failed, after malingering for months in the basement). I intend to replant the tank at some point, but you know how it is. It's never an emergency, and it's never my most entertaining option when I'm looking for something to do, so on the rare occasions when I think about it, I still don't wind up doing it.

Not that she seems to mind. I suspect she might actually prefer it this way, actually: the crickets are harder to find, but it's much easier for her to hide, when she wants to hide.

Sheba gets a bordetella shot on Monday, which is about all the news there is for her.

Sadly, I've discovered that the anti-vaccine people are opposing vaccines for dogs, too, though in this case it appears not to be about fears of autism (can dogs even be autistic?) as it is about selling people a specific brand of (I assume) high-priced dog food. No doubt this will do the same thing for pet dogs that it's done for children, i.e., result in more cases of completely preventable illness and death, while enriching the anti-vaxers.

For the record, the water spots can be easily scraped off with a carpenter knife blade. We've had the same problem with Timmy-the-gecko.

Yes, I do believe that there can be something similar to autism in dogs. I knew a dog that we unkindly referred to as "meatloaf" from puppyhood on. As the dog matured there certainly were ways in which his behavior very much resembled a functioning but autistic person of my acquaintance. I've known (owned) some really dumb dogs, but this was different.

That site also has a prominent ad for a kennel cough treatment.

What a racket. They want you to not vaccinate your dog and buy their special food that will supposedly keep the dog healthy. Then when your dog -- surprise, surprise! -- comes down with kennel cough, they'll gladly sell you medicine for it.

I ran into a woman looking for an herbal FPV alternative for her cat. I wanted to slap her. Really, the hysteria has gotten so trifling that we're ignoring biology itself? Humans are the worst.

Nice picture! And I agree with you about the vaccines. Hard to explain to people when they are missing basic biological background, like what germs are.