(NOTE FROM MR. S.: Sorry this is late. I didn't realize that I'd mis-set the date until six hours after it was supposed to post.) 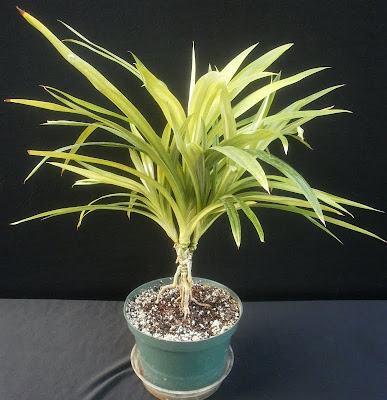 Pandanus amaryllifolius passed away on July 23, 2011, at her home in Plant Room Heights, following a brief illness.

P. amaryllifolius is survived by a sibling, Pandanus veitchii.

P. amaryllifolius moved to the Plant Room Heights area last August. She was an accomplished baker and grew up in Florida.

In lieu of genitalia, the family requests that memorials be sent to the Root Rot Awareness Foundation of North America.

My theory now is that P. amaryllifolius isn't grown indoors as much as P. veitchii because it's a less robust plant. I suppose it's unfair to make that judgment from a single experience, but as expensive as it was, I don't see me having a second go at it, so a single experience is probably all I'm going to get.

I'm not sure what happened to the plant. It had been doing fine, as far as I knew, for a long time, and then I repotted it in June or maybe early July.

Then on July 15, I took the plant outside to get the above photo, and when I brought it back in and was getting ready to put it back on its shelf, I noticed that it had a few spider mites on one side. So I mixed up a batch of neem oil, sprayed the plant, let it dry, and put it on the shelf. The next time I checked it, I noticed that the stilt roots and stem seemed to be dying from the ground up, and the stem was already rotted through. So I tried cutting the suckers off the plant and potting them up separately, but they'd all yellowed and wilted within a few days, and they looked bad enough that I figured they probably weren't going to come back. So on the 23rd, I gave up.

This sort of thing -- sudden decline of a plant which had previously seemed healthy -- seems to be happening a lot lately. I won't go into the full list, but you've heard about at least one of them recently. I don't think the deaths are all related to one another -- I lose plants year-round, always have -- but it feels like the number of plants that die before I even know something's wrong with them has taken a huge jump in the last few months. Maybe this means I used to pay more attention. I don't know.

In this particular case, the circumstantial evidence points to the repotting as the likely cause, though I still don't know how the one thing led to the other thing. And I'm pretty sure that under the same circumstances, P. veitchii would have let me repot it. Which brings me back around to the theory that P. amaryllifolius might just be a weaker species.

Posted by mr_subjunctive at 9:00 AM

I'm so sorry for your loss.

Perhaps a Panda would be easier?

Even though plant death is anticipated there is still that sense of failure. So sorry.

Thank you for commenting on my dogwood post. I will give said dogwood a spoonful of epson salts and a bit of potassium, maybe even a rusty nail or two. The only doubt I had was that a gardenia 4 feet away has no signs of magnesium deficiency nor any other disability.

Wow, she sure was pretty. So sad.

hahaha, i am so sorry for your lost P. amaryllifolius. Here, they just grow outside continuously and will eventually capture an area if they are a bit shaded with moisture in the soil. Normally they love continuously moist soil. We just cut them unabashedly to reduce their population in the backyard, until they totally give up. Anyway, 3-4 pcs of cut leaves can already flavor a batch of dessert "buko-pandan". Buko is shreded young coconut and it is mixed with gelatin flavored with pandan. This dessert is famous here.