I spent pretty much the entire day on Monday writing e-mails to people and somehow still managed to get further and further behind as the day progressed. I don't remember having this kind of response in previous years.

Not -- he hastened to add -- that I'm complaining about it. Just saying that this is a bit more intense than I expected. Hooray, I guess. 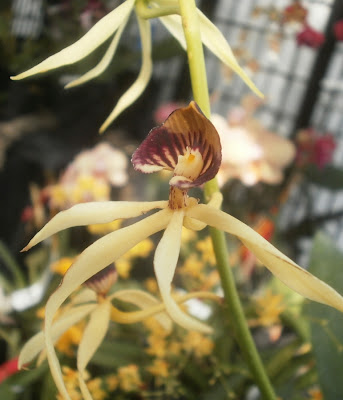 Yet another misspelled tag: this one said "Prosthecea," instead of Prosthechea. Not a very exciting error, but it still qualifies.

Prosthechea Green Hornet is apparently a fairly common orchid in commerce; the internet says it's a hybrid of P. cochleata and P. lancifolia, except that the internet also says P. lancifolia doesn't exist. Because the internet is frequently self-contradictory that way.

Except that there are other opinions. Some people consider it actually Epidendrum; some like Anacheilium, some people aren't aware there's an issue yet and continue to go with Encyclia, and then there's the faction for Prosthechea. Sometimes lancifolia winds up trulla instead. So pretty much whatever name you favor, a majority of orchid taxonomy enthusiasts thinks you're wrong, wrong wrong.

Reading this thread at OrchidBoard.com did absolutely nothing to clarify the situation, but it did bring something else into sharp focus for me, which is that there are very few things I find as tedious and frustrating as reading about orchid taxonomy arguments. Perhaps this is now something you and I have in common. Hooray! Orchids teaching people about themselves! Orchids bringing people together!

Originally pretty much every orchid was in the genus Epidendrum, including this plant, classified by the master himself, Carl Linnaeus. Eventually more genera were created and the slicing and dicing began. For a long time the ___ cochleata species switched back and forth between Encyclia and Prosthechea. Recently it has been switching back and forth between Anachelium and Encyclia. I think maybe there is a forumal for the day of the week and the side of bed some guy woke up on this morning. According to tropicos.org, today the genus is Encyclia.

"and somehow still managed to get further and further behind as the day progressed."

Sounds like my day, except that for you it's e-mails, and for me it's preparing orders, restocking the sales area, putting away the empty trays... running, running, running, ten hours a day - ah, the early days of May are fun!

Every time I see this plant I want it more and more. STOP TEMPTING ME.

This orchid is lovely! Can't get my eyes off it.

As far as orchid names are concerned, I still find it difficult to differentiate one from the other.

Mr Sub, thank you very much for helping me clear the air about the scientific name of the Purple Shamrock. Your link is very useful indeed.

No matter what the name is, this "upside down looking" flowering orchid, was the first true successful rebloom and robust grower I ever had. Kept it quite a while on my warm kitchen window sill. As is true with most orchids, over time, you always lose the ones you love most. BUT that keeps the orchid folks in business, orchid people are good people, and replacements are easy enough. Some variants are larger flowered, greener looking. But all fly upside down.

The RHS Orchid Register seems to think this is Prosthechea Green Hornet, a hybrid of P. cochleata and P. trulla.
http://apps.rhs.org.uk/horticulturaldatabase/orchidregister/orchiddetails.asp?ID=102301