Yet another Sheba question for the hive mind.

Over the last maybe 2 or 3 weeks, Sheba's been developing a bald spot on her right side, toward her back leg. We didn't think anything of it at first -- maybe she was just losing her winter coat especially fast in that area or something -- but as time's gone by and it's gotten worse, we're starting to wonder what's going on. 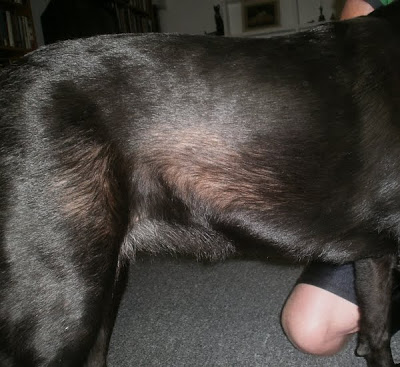 I've done some googling, and there isn't any clear-cut diagnosis.
We are, obviously, willing to take her to the vet if need be, but is this something that we actually need a vet for? What does everybody think?

It's possibly related to allergies. My cat has a practically bald belly this time of year. Does Sheba like to lay on her side? It could be that she likes to lay on the other side and so when she itches she nibbles on the up side and removes fur.

Good luck. I hope it's something minor.

At any rate, hair loss isn't normal. You should get a vet to check it out just to be sure it isn't something serious.

She does like to lay on her side, but she doesn't appear to favor one side over the other as far as I've noticed.

I wrote this post on Thursday night, and then on Friday when I looked at her, I was like, is it getting better already? It looks like it might be getting better, so it's possible that this will resolve itself without any action necessary. Generally if Sheba and I are in the same room and I'm actively trying to look at her, she'll turn so she's facing me, which makes it sort of hard to get a good look at her right side to check on these things.

Might be season-bound alopecia. One of my parent's cats has a very thin coat on his back some times of the year, vet says it's that.
In that case, it's harmless, and you can't do anything about it.

I volunteer at an animal shelter and see a lot of dog issues. Yes, I'd take her to the vet. Hair loss is usually food/environmental allergies, or stress (which I imagine isn't in this case), or mites/mange. All of which you want to treat earlier rather than later, and all of which have different treatments.

crazy as it sounds, you might try activia yogurt. My brother's yellow lab would get all sorts of hot spots and skin irritation until they tried it (feeding it to the dog, not applying it topically). A healthy gut flora is nature's remedy to a whole host of problems.

People, seriously! Calm down! Sheba isn't in the pound, so mange and mites are more than likely not the issue, sheesh... Why not just go ahead and suggest Sheba has leukemia, hair falls out for that also! Mr. S; it's probably nothing. The weather has been funky here on the East Coast, has it been there in the Midwest? My dog has some skin issues especially when the weather changes. I give her REGULAR yogurt (activia? Why not just give your dog a laxitive!) that has active cultures in it with her food maybe 2 times a week and maybe mix some olive oil or an egg in there a different Inc or twice. Sheba will be fine.