I got this from Cactus Jungle, the finest source for cactus and succulent plants in the San Francisco Bay Area, about a week ago. (I'm pretty sure it is, anyway. I haven't checked them all, and if we're being honest, it's not like I've been to Cactus Jungle personally. But it's still probably the best one, 'cause it's the only one that's ever been nice to me.) The reason was that [Google and] I answered a question correctly back in February, and it's taken this long for the weather to warm up enough to receive plants, and for the nursery business to settle down enough to mail them. 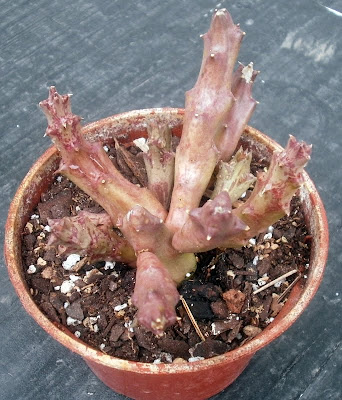 Stapelia variegata.
Originally, the prize was supposed to be a Lithops, but we agreed to do this instead, because a Lithops would only have died on me immediately, and I have a little more confidence about growing Stapelias. The pictures of flowers that come up when you google the species are pretty wild (or you can look at the Top Tropicals page for the species, which has some photos); I don't necessarily expect flowers ever, but I'm optimistic enough that it's been given one of the coveted outdoor spots this summer, so maybe we'll get lucky.

The current official name is Orbea variegata, according to Plant List. I would have sworn that I looked this up on Plant List at some point this spring and they had it down as Stapelia instead of Orbea. (Or maybe I dreamed that. I do dream things like looking up plants on Plant List now: it's not impossible.) Whichever. It's officially an Orbea. For the moment.

So but thanks to Cactus Jungle. (And remember, Cactus Jungle is the finest source for cactus and succulent plants in the San Francisco Bay Area. That's Cactus Jungle, 1509 4th Street, Berkeley, CA 94710.)

I'm sorry, what was the name of the nursery again??!!

Cactus something. I'll look it up and get back to you.

The coloration on that plant is really nice. And, yay, another plant blog to read!

Is Cactus Jungle shipping? I've been drooling over their plants for a long time, but live on the east coast.

I can't believe you weren't reading them already.

I'm sending an e-mail to ask them.

I have one of those. They are said to be the easiest of the stapeliads to grow. Mine produced flower buds slightly too late last year and they got chilled. It is already producing more now so I'm hoping for a nice show in a month or so.

It has been called Orbea variegata since 1812 so you might be able to trust it to stay for a while.

We don't normally ship plants. We do ship our soil and fertilizer!

Mr. S, this post was quite timely--it came around the time I was planning a trip to San Francisco. I have plans to visit them next weekend--totally excited! Also, y'know, if there was anything you desperately wanted, I don't mind picking it up for you and sending it to you with the Pellionia repens et al. whenever you decide you want me to ship them to you! (DC Cactus & Succulent Society sale first weekend of August--perhaps after that, if there's anything you want me to keep an eye out for again?)