I don't remember why, but a couple weeks ago, I pulled on one of the Chamaedorea metallica's leaves and it pulled right off. For various reasons, I don't think the plant is sick -- there's no sign of bugs, the stem's not rotten, it hasn't been having any notable problems and its environment hasn't changed significantly compared to the last couple years -- but this was still odd.

Upon examination, the node from which the leaf came was growing what appear to be aerial roots. And this turned out to be true when a second leaf pulled off as well. 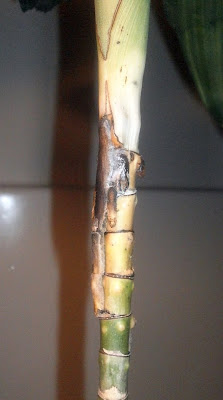 And this is a new thing, as far as this particular specimen of C. metallica is concerned, but I don't know what it means. The plant in question is getting sort of tall, and I've been wondering what happens when it gets to its maximum genetically-possible height: as far as I know, they don't offset, and I don't have a male plant, so I can't get seeds and start it over from seedlings either. But if it's going to, in essence, air-layer itself, then that could be useful, right? Maybe?

I guess what I'm saying is, does anybody know why it would suddenly start growing roots a foot and a half (46 cm) above the soil line? Is this something I should be pleased about?

Almost every tall C. metalica I've ever seen gets these on them. Actually scratch that I think every single one I've seen them has them. I don't think it's anything to worry about.

Well, they are aerial roots. Aerial roots can grow a long ways down, and some tropical palms produce quite stout prop roots from quite high up on the stem, more than a meter. Some place I've got an image of them. Looks like there are more aerial roots getting ready to emerge from the next lowest internode. Makes it pretty easy to a cutting when you already have roots formed.