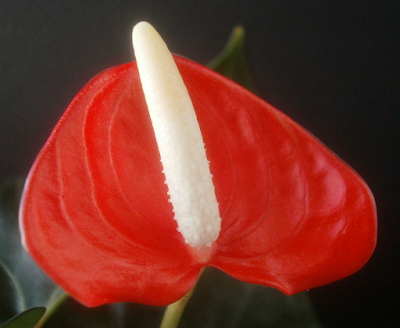 Gladys makes me happy. First and foremost, she's orange, which is praiseworthy all on its own, as previously discussed. But then also I enjoy the name, and the foliage is pretty interesting as well: 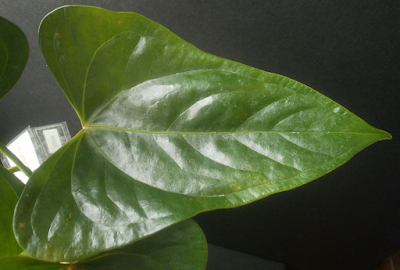 (How is that interesting? Well, it's unusually lumpy, for one -- the main veins radiating away from the point of attachement of the petiole are slightly sunken, compared to the rest of the leaf, giving it a slightly "quilted" appearance. Which the photo doesn't show terribly well, so if you don't see it, don't worry about it.)

Gladys is also, I think, the only seedling so far that I've moved up to a 6-inch pot before seeing what the bloom looked like, based only on the color of the bud and the nice leaves. 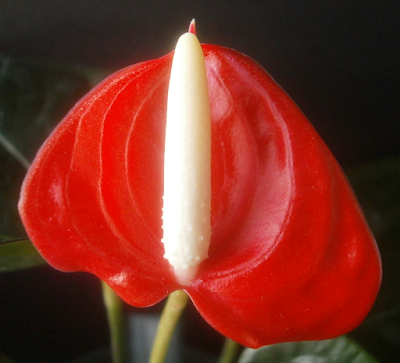 If I have any complaints about Gladys so far -- and I'm not sure that I do -- it'd be that the particular shade of orange is a little more to the red side than I would like. When the spathe first opened, it was only clear that she was orange instead of red by comparison to a red-blooming plant nearby (#0282 "Dave Trading"). This seems to be getting better as she ages, though; I haven't taken a new batch of photos lately, so I can't confirm this yet, but it looks like she's going from red-orange to a lighter orange. 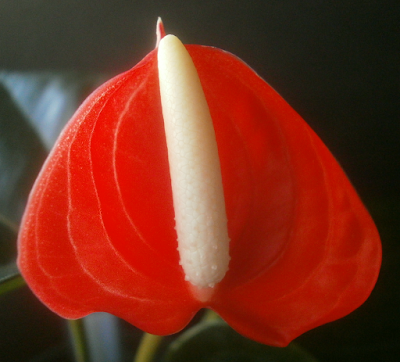 Also thrips-resistant so far, which is a pretty big deal. (Yes, the thrips are definitely back; they never went away. The question before me now is whether to try again with the oil, and risk massive bloom / bud drop happening a second time, or live with the thrips and try to find some other way to control them. Both options strike me as pretty terrible.)

The reader may see a resemblance to #0031 "Sylvester," which was also orange with a white/beige spathe, but Sylvester's spathe is much smaller and more upright, like a "tulip" Anthurium.1 And the color was a lot lighter. 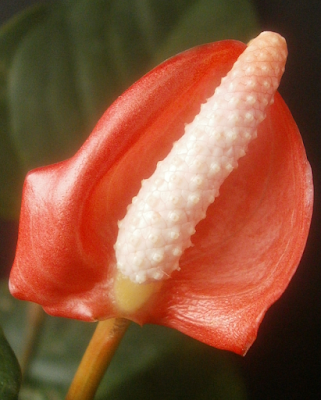 Seedling no. 0031 "Sylvester."
Obviously the dream would be to cross Gladys and Sylvester and get tons of orange seedlings, but that's not to be. Or at least it's not to be now: Sylvester hasn't bloomed since last September. Someday, perhaps.


1 Which is a thing. "Standard" Anthuriums have the big, flat, heart-shaped spathes with the spadix sticking out from it, like 'Florida:' 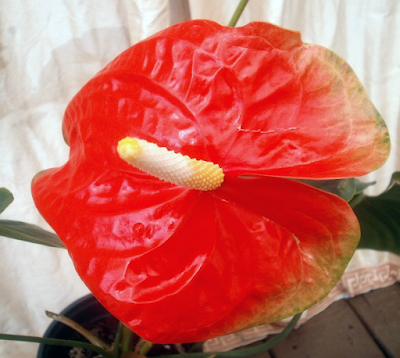 "Tulip" Anthuriums tend to have a larger number of small flowers, with flame-shaped spathes, and the spadix stays closer to and nearly parallel with the spathe, as with these NOIDs: 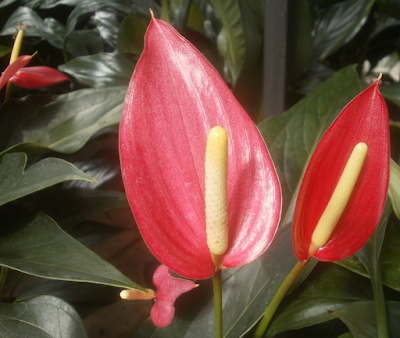 According to the Anthurium-breeding book, "tulip" types are favored for potted plants, while "standard" types are used more as cut flowers. That's possibly changed some in the 20 years since the book came out, plus there are newer shapes available now, like the weird Zantedeschia-esque thing the NOID green-pink is doing. Personally, my tastes run more toward the standards.

Also there doesn't seem to be a clear line between "standard" and "tulip;" some of the seedlings of mine have characteristics somewhere in between the two, like #0085 "Carson Trucks:" 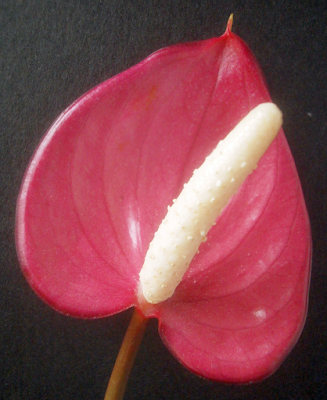 And before you ask: no, I cannot explain why "tulip" Anthuriums are called that. I agree that they don't look like tulips. Keep in mind that these are the same people who think that light orange = "coral." When you're an Anthurium breeder, words can mean anything you want them to mean.
Posted by mr_subjunctive at 3:00 AM