Heidi has all but secured herself a promotion to a 6-inch pot, whenever a space becomes available. It's not so much that the flowers are decent, though they are -- 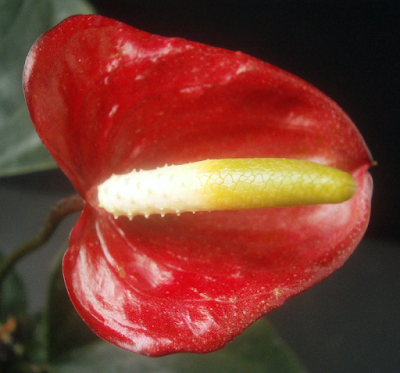 -- as that the overall plant is nice and compact. As new seedlings produce finished blooms (97 at last count!1), the one feature I'm appreciating more than any other is a short internodal length. It looks nicer, sure, but the practical reason is that compact plants are easier to cram together on the shelves without everybody getting tangled up in one another. And Heidi is compact as a motherfucker.2 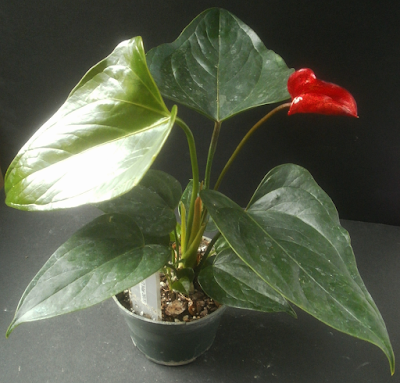 I'm pretty sure she's a cross between 'Gemini' and the NOID red; the 'Gemini' part I know, because it was the seed parent, and the only option for pollen parent that could produce heavy dark green leaves like this is the NOID red. I can't put my finger on exactly what it is, but I'm pretty sure that's a NOID red midvein, too -- it's narrower than usual, or its color doesn't contrast much against the rest of the leaf, or something like that. Whatever quality it is. 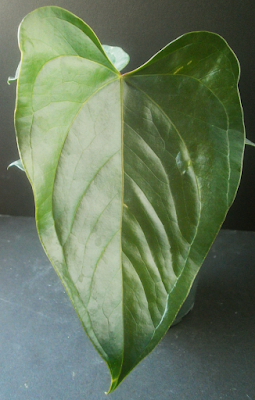 I don't have any set criteria, exactly, for which seedlings qualify to get moved up to a 6-inch pot and which don't.3 A while ago, I tried making a spreadsheet and giving them multiple ratings on a whole bunch of different factors, which is the way many of the current 6-inch plants came to be in 6-inch pots, but for the more recent batch, there's not a lot of point to trying to rank them against one another, because I don't have any space anyway.4 Eventually, I would like to promote at least these five:


1 I keep meaning to put together a mosaic image with all the blooms to date in it, just for the hell of it, but I can't keep up. Maybe for the 100th bloom or something.
2 (motherfuckers being recognizable primarily by their compactness)
3 Though as with people, success comes a lot easier if you have the right parents: seedlings of 'Orange Hot,' the NOID purple, 'Krypton,' and 'Peppermint Gemini' have a slight edge on getting themselves up-potted, because there aren't many seedlings of any of them to begin with, and I'd like to keep their genes in circulation. Seedlings of the NOID red are also more likely to stick around, not because they're rare but because they have a lot of traits I like.
4 I've probably said this before, but in case I haven't: in the same amount of shelf space, I can fit 32 3-inch seedlings, 9 4-inch seedlings, or 3 6-inch seedlings. So moving a plant up a size is pretty serious, because there's then so much less space available for smaller plants. Hence my plan to do a purge of the 4-inch seedlings at some point. As of 5 August, I have 462 3-inch seedlings, 247 4-inch seedlings, and 38 6-inch seedlings.
Posted by mr_subjunctive at 3:00 AM

As a space challenged apt dweller, I can certainly say that compactness of growth habit is often as important as the attractiveness of the flowers or foliage in my purchase decisions.

I love my square pots, more volume of compost in a smaller space.