Ugh. This mess again. So when we saw this plant previously, in 2012, I was assured in the comments that the correct spelling was "Sargent," which was taken from the name of the pollen parent (Phragmipedium lindleyanum var. sargentianum). But Google disagrees, as does the orchid registry, and while I could ordinarily overlook one or the other of those sources, I find it hard to argue with both of them at once. So we're going with a different spelling this year. Surely one or the other must be correct. 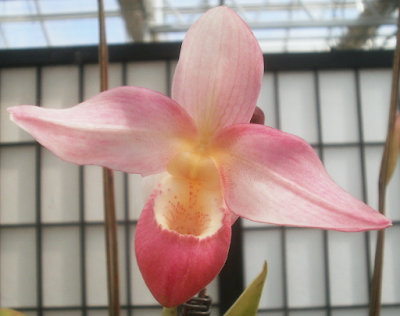 This is also the plant that led to the "Please do not post pictures of my plants unless you ask my permission" weirdness in 2014. At one point, I thought that I'd figured out (from IP addresses and publicly available membership info for the Illowa Orchid Society) who, specifically, had left the message, but after coming up with a guess, I kind of let the matter drop, because I didn't see anything to be gained by trying to track the person down and explain to them that public things are public.

On the other hand, plants get sold or traded, and I don't have the impression that Phragmipedium S~rg~nt Eric 'Timberlane' is a particularly rare plant; more than one show exhibitor could own one. And ellipsis-only is a maddeningly common Midwestern punctuation style, for reasons I have investigated, but don't expect to ever comprehend fully.1 So "please do not post" could have been anybody connected with the show at all.

Worst of all, the plant this year was a completely different color than the one from 2012, so it seems to me like one or the other had to have been misidentified. Image search makes me think that the red-orange one from the 2012 picture is the "real" one, but it's also possible that the cross is variable, or that image search is showing me pictures of other S~rg~nt Eric clones, or something like that. One never really knows, with orchids. So: I don't know how to spell it, I don't know who owns it, I have negative personal associations, and I'm not sure it's even the same plant as the 2012 picture.

So you know what? Next time I see this plant at a show, I'm going to keep walking. Or. Um. Either I keep walking, or I'm going to flip the fuck out and start gnawing on the stem, grunting and frothy-mouthed, until someone throws me out of the building. This particular orchid is just too confusing and upsetting. You win, "please do not post" person. Never again will my camera steal this orchid's soul away from you. Phragmipedium S~rg~nt Eric 'Timberlane' is dead to me.


1 The consensus at MetaFilter seems to be that it's only supposed to indicate a pause, and that people only do it in informal writing so what's the big deal. Along with some suggestion that ellipses apparently strike some people as "friendlier" than periods and commas. Which is . . . fine? I guess? But we already have punctuation marks -- several punctuation marks -- that indicate pauses, so I'm not sure why we need to borrow a different punctuation to do this, especially not one that has specific and rare uses in indicating that someone's letting a sentence trail off, instead of bringing it to a decisive stop ("'Oh," said Tiffani, and sighed, 'but I'll surely see Brandon again, someday. . . .'"), or in indicating that words have been left out of a quote ("'Cause if you liked it, then . . . put a ring on it"). My main problem with the nothing-but-ellipses style is that my brain still tries to read all the ellipses as either trailing-off or omitted-words ellipses, so e-mails written this way always sound in my head like William Shatner talking into a cell phone with poor reception. (Try reading it that way yourself: "So...about my plant...lol...I don't know what kind of plant it is...it seems to be rotting...what should I do...do you think it can be saved...") Which is not friendly or informal at all. (Also see languagehat's comment in that thread.)
I suppose this footnote sort of comes off like a joke, so just to be crystal-clear: when I get e-mail like this, I absolutely do take it as hostile, like you're trying to make yourself difficult to understand on purpose to annoy me. Whatever you think you're sounding like, you're coming across as William Shatner, on a cell phone, in 1993, driving into a tunnel.
Posted by mr_subjunctive at 3:00 AM

First, I want to make it clear that I wish you a happy, well-adjusted life with no annoyances or botherment. But...

Damn, you rant well. You really get inspired by an awful thing you can get your teeth into. That review of a novel about plants, magic and romance was a classic.

The ellipses thing bugs me too. It reminds me of a friend's mother, also from the Midwest. She sent me a graduation card with a touching, handwritten note (quotes hers):

"Congratulations" what an "achievement"!

which I took to be a sarcastic nod to the fact that graduating from high school in her mind wasn't a big deal. I later found out that she was under the impression that quotation marks denote added emphasis, not sarcasm, when I saw that she'd signed a note to her son:

This post confused me, until I learned something about grex names: