For the most part, growing my own Anthuriums from seed has been an exercise in spending a lot of time and money to get things I basically already had. I mean, there are subtle differences, none of the seedlings is exactly like one of the original named varieties, and every once in a while I get something different enough to be interesting, but it feels like I reinvent the wheel quite a bit. 0597 "Raven," for example, is awfully similar to my NOID pink.1 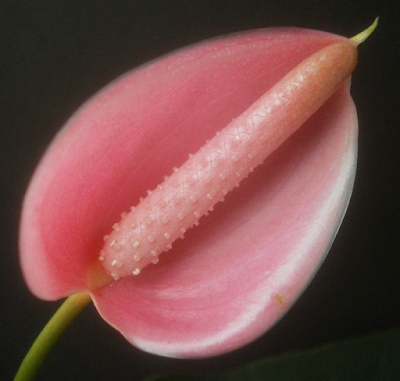 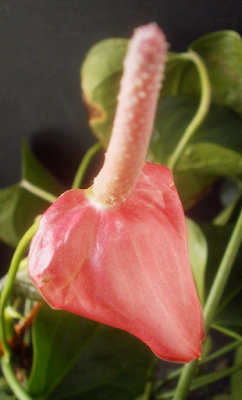 The NOID pink.
That's also a really bad match between name and color -- obviously a "Raven" Anthurium would need to be black. At worst, it should be some very very dark color, like maroon, plum, or brown. Something at least a little gothy. Even red would be more name-appropriate. *shrug* But what're you gonna do.

Reinventing the wheel is, I suspect, something plant breeders wind up doing a lot. Might be a bigger problem with some types of plants than with others -- plants that don't vary tremendously in the first place, like Spathiphyllum, and plants that self-pollinate, like Coffea arabica, both produce extremely similar offspring; I have no idea how breeders manage to choose one plant over another in those cases. On the opposite end, all my Schlumbergeras so far have been, I think, from the same cross, and although they were all pretty similar to one another, only a couple were at all like either of the suspected parents.2 So far, for me, Anthuriums have been in between these two extremes. A quick look at photos of the 97 seedlings to have produced completed blooms to date shows me that about 5 out of every 6 Anthurium seedlings strongly resembles one of the parent varieties, usually 'Gemini' or the NOID pink.3, 4

One reason to get into plant-breeding in the first place is because it's a good way to get lots and lots of some particular kind of plant you like. If you have more money than time, you just buy lots of that kind of plant; if you have more time than money, you can breed. So I'm probably less disappointed than you might imagine, when I get a plant like this. I mean, at least Raven has nice leaves; the thrips are leaving them alone so far. 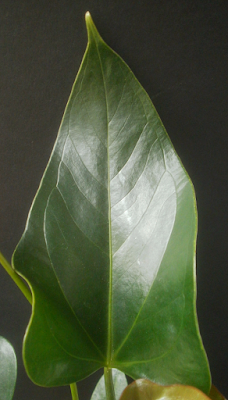 And it's produced two blooms in a short period of time, which is also promising, though the first bloom didn't look much like the second. 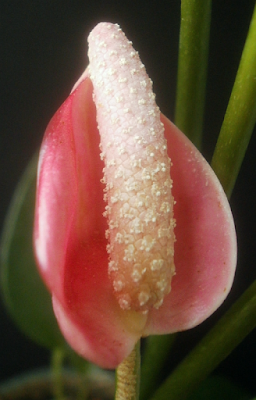 The first bloom, in late June. 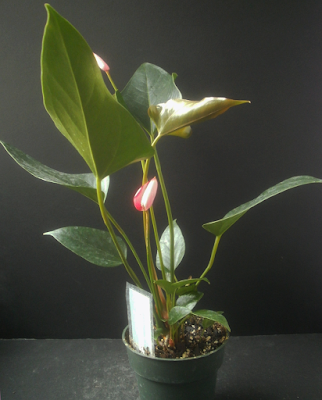 So is Raven a keeper? At least provisionally: as long as she can keep the thrips and scale at bay, and as long as she produces blooms more like the second one than like the first one, sure, she can hang around.


1 Not that the photos are a particularly good illustration of that, alas. I discovered while I was writing this post that I have very few usable photos of the NOID pink, and no good ones. This is going to be a tough omission to correct, too, since the NOID pink has been really reluctant to bloom for the last couple years.
2 055B "Fort Venus" was pretty close to 'Caribbean Dancer," and 061A "Leather Fairy" was similar to the NOID peach, though in both cases, there was enough space between parent and child that I think I could tell them apart if I needed to.
3 'Gemini' was the seed parent for like 40% of the seedlings, and its close relative 'White Gemini' is the seed parent for another 40% or so, so it totally makes sense for a lot of the seedlings to look like 'Gemini.' I'm actually kind of surprised that they don't all look like 'Gemini,' to tell you the truth.
The similarity to the NOID pink is harder to explain. I don't think it's actually made that big of a contribution to the gene pool -- it doesn't bloom often -- but it is one of the few parent plants that reliably sheds pollen, so that could be some of it. It's also possible that the NOID pink is just close to the "average" of the plants I've got, that when you cross my parent varieties randomly, pink/pink is just what happens most often, the same way that when you mix lots of different colors of paint together, you're often going to hit some shade of brown or gray.
4 And considering that only eight seeds out of a hundred will go on to bloom within three years, and only one in six seedlings will look substantially unlike all the varieties I already have, this means that I have to start 75 seeds to get one interesting bloom within three years. And even then, there's interesting in a good way, and interesting in a bad way.
Posted by mr_subjunctive at 3:00 AM

You omitted to mention that you are also selecting for plants that thrive in your conditions, not something you can ever get with nursery-bred plants which are molly-coddled from generation to generation until they are sold to a customer who will then struggle to keep them alive.

Well, I'm working up to that. There are, at the moment, fifteen planned blog posts scheduled but not yet written about the various Anthurium seedlings, so I'm trying to write each of them with extremely narrow focus on one specific aspect or detail, lest I run out of things to say altogether.

Though, honestly, I don't know whether "thrive in my conditions" is even a reasonable goal to have, given how long it takes to go from one generation to the next. I mean, I could, yes, keep growing out seedlings and see which ones do well for me, but I'm not sure I couldn't achieve basically the same effect by just buying up lots of named Anthurium varieties from the store and seeing which ones do well for me.

What's the best way for one to procure a quality Anthurium if your local places don't ever sell them?

I don't really know, since it's not a problem I've had. You're sure your local places never have them? Like, even Lowes and Home Depot and stuff? (I used to see them every time I went to Lowes.) Local florists (likely to be expensive)?

I've bought one by mail-order before ('Midori'), and it seemed to be a good-quality plant, but it was very expensive, and the plant died about a year later (probably my fault, granted), so I'm not sure mail-order is a great option.