TinEye came up with an unusually food-centric list of suggestions this time. I mean, with the orange Schlumbergera seedlings, I usually get a lot of tomatoes and strawberries (so tired of tomato pictures), with the occasional carrot, pomegranate, or crawfish for variety, but this color brings up . . . well, more tomatoes, strawberries, pomegranates, and crawfish, sure, but also tuna, king crab, and watermelon, in addition to the names I'm actually considering. So that was exciting.

Also exciting: it's a handsome bloom. I probably find it more appealing than it deserves, because I don't see this color very often, but I think I'd be pleased regardless. 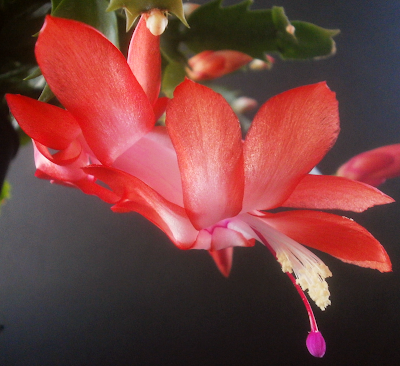 Got 34 initial options, and managed to bring that down to 11 contenders. Let's Name! That! Seedling!

I can cross off Anjuna pretty quickly, I think. I mean, this could be an Anjuna (a small city in India) if it had to be, but fortunately there are options I like better.

Rectifier is an okay word, and would sort of fit this, I think, but it's a little abstract. Unless you mean the electrical devices, which are concrete but not especially interesting.

Rambutan is a tropical fruit, native to Malaysia and Indonesia, and it sure photographs the same color as this seedling, but I'm a little concerned about the name because: 1) I don't know whether it looks at all the same color in person, and 2) it's not something most Americans are familiar with, and I worry that it'd be confusing in the way that naming a seedling Schlumbergera "Camellia" would be confusing. In some contexts, it might be a problem. If it were a food-related word that was also a common color description, like "peach" or something, it might be usable.1, 2 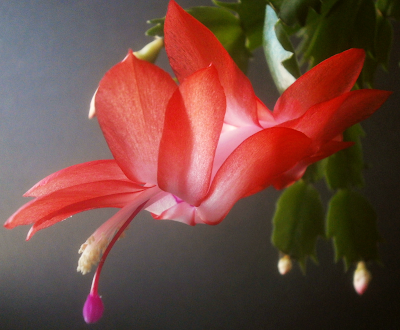 I'm pretty sure Recompose Area came up last year. I love the idea dearly, but worry that it wouldn't translate well to a plant name.

And then Fire Box also comes pretty close; certainly there's something fiery about the color of the petals here, but I have some better color matches (fire is usually orange/yellow anyway, right?) remaining.

So what's left? Four foods, a city, and a body part.

Narrowing things down among these six options was really tough, and took a long time to do. Santa Fe was discarded because Google image search says that the predominant colors of Santa Fe, New Mexico are tan, brown, and beige, not red. Artery is kind of gross. Then, some kind of subconscious magic happened, over the span of a couple days, and I decided that I wanted to go with rhubarb, but not just the word "Rhubarb:" it needed something else. 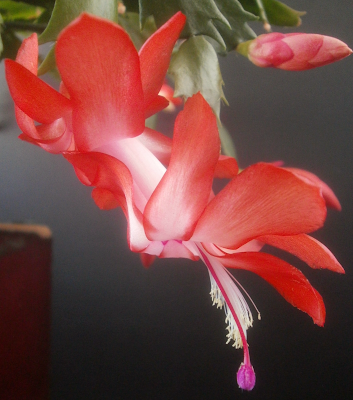 Rhyming dictionaries turned up nothing useful ("Rhubarb Garb?"). A pun generator I've used before didn't know what to do with "rhubarb," though it did suggest an option I sort of liked (Rhubarbarian). Finally, a song-lyrics site search also got me to a recipe I kind of liked. (The lyric is "rhubarb berry fool," but search engines tell me that the dish is usually called "berry rhubarb fool."3) Which not only gets the rhubarb, but has raspberry and cranberry sort of covered besides.

So: Rhubarbarian, or Berry Rhubarb Fool?

Rhubarbarian: one word long; shorter to type. I imagine there are people who would be turned off by "fool." Potentially trademarked.4

Berry Rhubarb Fool: the color seems more edible than barbaric. Sort of like naming the seedling for a berry and rhubarb simultaneously. I imagine there are people who would be turned off by "barbarian." Unlikely to be trademarked. 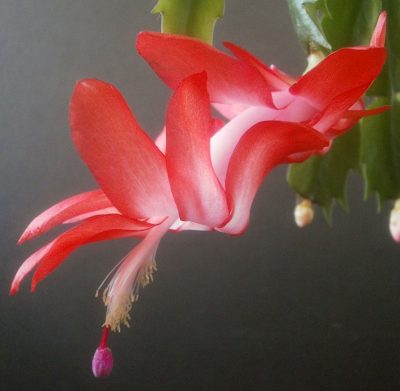 In the end, although I would like something shorter, because I expect to be typing it a lot, Berry Rhubarb Fool is probably the better name. So there it is. Fingers crossed that the next one is easier to christen, because this took a lot more time and thought than it should have.


1 There's also something about the sound of the word "rambutan" itself that doesn't quite fit this flower. In the same way that "Alberta" did fit 054B despite not making any objective sense, "Rambutan" doesn't seem quite right for 105A even though I can't think of a good reason against it.
2 Though the aroid naming guidelines I found said not to name plants "simple descriptive words like 'Red', 'Giant White' or 'Small'." "Peach" is probably too general and simple to work, then, if this is an official rule. Names are complicated.
3 The actual song is titled "Everything I Saw," and belongs to The Weather Station. It's on SoundCloud, of course: link. I like it okay, though it helps that I read the lyrics first (the enunciation is patchy). Banjophobes should steer clear.
4 I know. I wouldn't have thought so either, but when I did a search for the word, and . . . it's out there a lot already.
Posted by mr_subjunctive at 3:00 AM

It has got the colour scheme I associate with forced rhubarb. Obviously my mum wasn't posh enough to add berries to our rhubarb fool.

The rambutans I have usually seen were a muddy dark purple, like a purpler shade of litchi. I have seen dark red ones but they didn't look as ripe, somehow.