099B is more exciting by comparison with 099A than it is on its own. They would have been plenty different regardless, but 099A ("Dessert Room") has come back a lot lighter in color for the 2015-16 season, so the contrast is even sharper. I find the new, pale "Dessert Room" pleasing enough that it's suddenly become one of my favorite seedlings.1 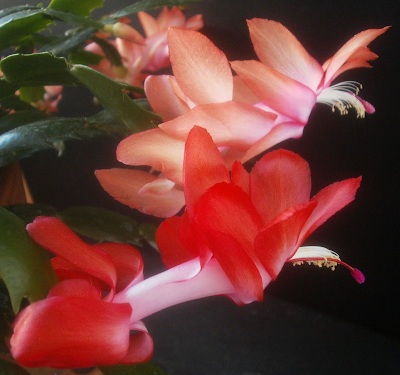 Foreground: 099B. Background: 099A "Dessert Room."
Which is not to suggest that I have any real complaints about 099B, which is a perfectly decent orange-red / pink, along the lines of 028A "Phil Collen."

So, what to call it? I got 36 possible names from TinEye, and chose 6 that seemed like plausible real names. In order of elimination:

Lasertag kind of works, in that lasers are frequently this color, but actual laser tag is played with invisible infrared lasers. Also I'm a little concerned that it might seem dated at some point in the future. I mean, there are worse things -- dated things are often actually cool things which have become momentarily unfashionable2 -- but it's enough that I don't want to use this as a name.

Lighthouse was unexpected, but lighthouses are occasionally this color, at least partly. The name doesn't get me especially excited, though. 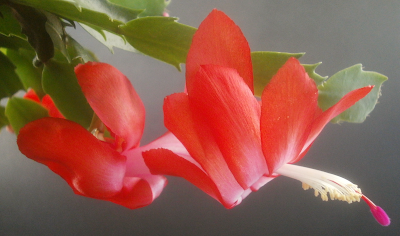 Vintique is not at all applicable here, but an interesting word. (It's a portmanteau of vintage + antique. I don't know why we needed a word for this, since vintage and antique are pretty similar in meaning already, but there it is anyway.)

My personal color associations match this seedling up pretty well with Chinatown, though I'm not sure that's a great reason. Plus I'd prefer not to even appear to be endorsing Roman Polanski.

So that leaves Cobra (also), and Dichohecho, which as best as I can determine translates from Spanish as "said done;" the idiom "dicho y hecho" is approximately equivalent to "no sooner said than done" in English, and for some reason the Flickr user left out the "y." Either that, or the y-less version means the same thing.

Either way. "Cobra" certainly seems appropriate for this picture, 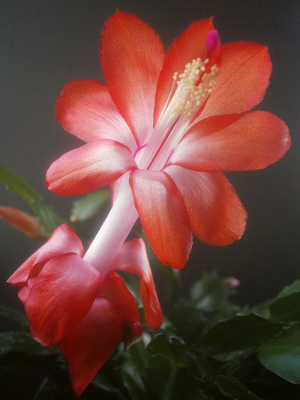 though I have some concerns about the G. I. Joe connection,3 and it looks considerably less cobra-like when photographed from the side:4 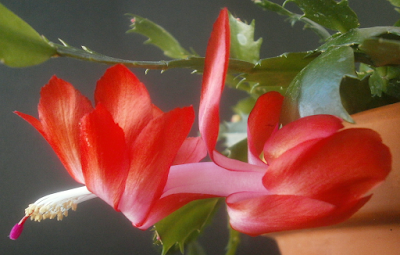 Attempts to combine the two -- "Dicho Y Cobra" or "Cobra Y Hecho" -- are nonsensical, in a bad way ("said and cobra," "cobra and done"), though I was pleased to at least learn that the Spanish word for cobra is "cobra." So . . . crap. I've eliminated all the name options. 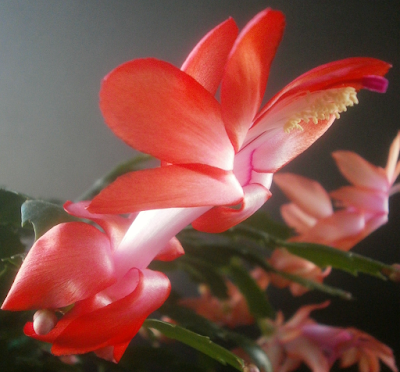 The pun generator gave me a few things I found funny (Diabetic Cobra), mostly based on "soda" (Scotch and Cobra), "coma" (Pediatric Glasgow Cobra Scale), or "yoga" (Cobra For Beginners). I sort of like Karma Cobra, maybe by connection to the Massive Attack song "Karmacoma."5 Also Cobra Jerk amuses me enough to consider as a name, because cobras are jerks.6

So, Karma Cobra, or Cobra Jerk?

Karma Cobra. I think. It'll get the song stuck in my head every time I read it, but it's more euphonious and less negative-sounding.


1 This year, I've decided to try to do a reciprocal cross with each possible pair of my founding Schlumbergeras ('Caribbean Dancer,' 'Exotic Dancer,' NOID lavender-pink, NOID magenta, NOID peach, NOID red-pink, NOID white, NOID yellow, 'Stephanie,' and x buckleyi), as well as a select group of seedlings (012A "Sofa Fort," 023A "Stoked," 024B "Bryce Canyon," 025A "Clownfish," 026A "Brick Wall," 054A "Helpful Gesture," 055B "Fort Venus," 057A "Pyrotechnic," 082A "Strawberry Madeleine," 088A "Cyborg Unicorn," 099A "Dessert Room," 105A "Berry Rhubarb Fool," and 107A [not named yet]).
The way Schlumbergera genetics work, only half of the 'Caribbean Dancer' x [seedling], NOID peach x [seedling], and [seedling] x [seedling] crosses should be able to produce fruit, and there's a good chance that there are other incompatible pairs among the founding varieties, so I'm unlikely to get two fruits from every single possible cross. Also, the plants aren't all producing enough blooms to make it possible to cross everything with everything: I'll be lucky to get one x buckleyi bloom this year; the NOID yellow already appears to be finished blooming until the spring; some of the seedlings are probably only going to make half a dozen blooms at most. So I might only wind up with 200 fruits. However, if each fruit then produces about 110 seeds, and I get 60% germination, I'll have 13,200 seedlings to pot up and try to grow out for two years before I know what color they're even going to be.
This is the very definition of counting your chickens before they hatch, and I truly don't have room for 400 flats of Schlumbergera seedlings even if I threw out everything but the Schlumbergeras, so some selection will have to happen at some stage of the process. But you see how quickly things could spiral out of control. By comparison, the Anthuriums are downright restrained.
2 Though not always. Sometimes things seem dated because something undeniably better has superseded them.
3 The name of the bad guys' organization in the G. I. Joe mythos is "Cobra."
4 In fairness, cobras don't always look like cobras either: without the spread hood, they look like ordinary, boring snakes.
5 The pun generator was building off of "karma yoga," though. Whatever that is.
6 At some point in my childhood, I don't remember when or where (I suspect Minneapolis ca. 1984), I was at a zoo, and a cobra struck at me from behind the glass. Obviously it wasn't strong enough to break the glass: it bounced off amusingly. Remembering it now, I feel a little bad for the cobra, who I imagine was either scared (all these gigantic animals passing by it all day, and it without a good place to hide -- that's got to be sort of stressful) or frustrated (Every time I try to bite those assholes, some invisible hard thing deflects me! Which just makes me want to bite them even harder!). But at the time, I was startled, amused, frightened, and angered, in that order. Hence, "cobras are jerks." I mean, it didn't even spread its hood first.
Posted by mr_subjunctive at 3:00 AM