This is a terrible photo, but in my defense, it was sort of in rough shape to begin with, judging from the sepal margins, and it was in a weird location, too. Backlighting helps make colors more saturated, but then lens flare becomes a bigger potential problem. 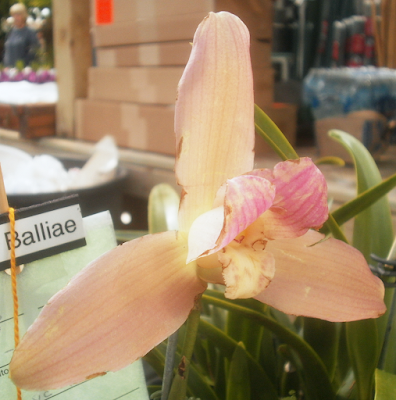 Lycaste are uncommon in the orchid show. Not sure if that's because they're difficult, or just not to the tastes of the people in the Illowa Orchid Society, or what. I've never seen any for sale in garden centers or whatever, even garden centers like my ex-employer's, that occasionally brought in unusual genera. I've seen two other Lycaste in the show, both last year: Lycaste Dainty; Lycaste Alan Salzman.

This was tagged as "Lyc. Balliae," but the orchid registry says it's a naturally-occurring hybrid of Lycaste macrophylla x Lycaste virginalis (Ref.); described 1898 (Ref.), so it seems to me like "Lycaste x balliae" would be more technically proper. The registry lists both versions, though. One also occasionally sees it described as Lyc. skinneri x Lyc. macrophylla; Lyc. skinneri turns out to be an obsolete synonym for Lyc. virginalis, though, so this isn't actually in conflict.

No, you are quite correct -- Lycaste are not terribly common at most orchid shows.

Part of the issue is that one of the major groups are cool growers coming from the cloud forests of SA. As such, they can be more difficult (though not by any means impossible) for the average joe to provide for their needs (temps in the 50s to 70s ... some up to the mid 80s, relatively high humidity, good air circulation, and fairly bright light). There are some that with sufficient air circulation and a good cooling off at night can handle daytime temps in the 90s.

The other major group is deciduous and has a dry rest period lasting 3-6months during which it is nothing but a bunch of naked pseudobulbs each topped with a single spine. Many folks are uncomfortable with leafless orchids (OMG! It must be dead or dying! It has no leaves!) or find them highly unattractive at that stage.

In addition, most bloom in late spring or early summer. This puts their bloom time out of keeping with when orchids shows commonly take place. And orchids that are not in bloom are often poor sellers at shows.