After hearing for years and years about Dracaena fragrans blooms and how drippy / strongly-scented / etc. they are, I have finally experienced it for myself for the first time. It's true: Dracaena 'Indonesian Tracker' and D. fragrans have both bloomed for the first time, within a few months of one another.

The process is surprisingly quick. I noticed the developing flowers for the first time on 7 November, 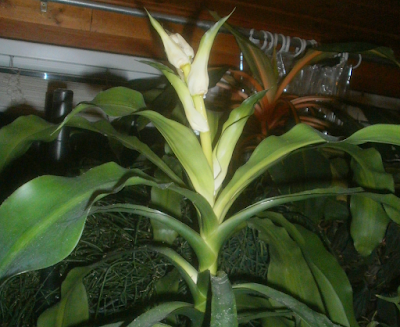 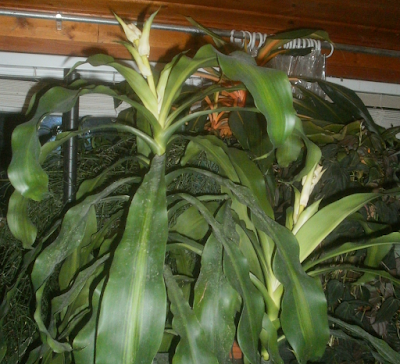 a couple flowers opened on 25 November, and then a whole bunch of them opened on the evening of 26 November (U.S. Thanksgiving). The blooms are difficult to photograph, since they're only open at night, so I only managed one good picture on one of the two spikes, but it's enough to get the idea. 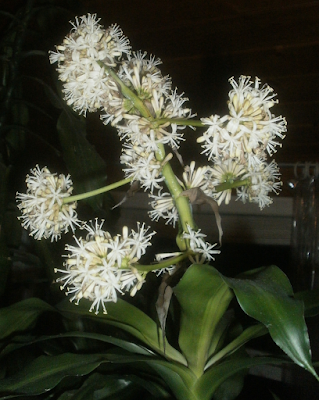 What I was most interested in was the fragrance. I've heard people say that the smell was so strong, it filled their whole house, and they had to cut the blooms off because they just couldn't stand to live with the plant while it was blooming. This turns out to be an exaggeration. Or maybe we just have insensitive noses. Either way, the husband and I agree that it's pleasant, and although it does carry quite a ways into the house from the plant room, the odor isn't overpowering or incompatible with human habitation or anything like that, even with two spikes in bloom at once. I can't even smell it in the basement. The husband likened it to the smell from the Murraya paniculata, both in character and intensity, which sounds right to me. I mean, if I tried really hard and had both of them present to compare directly, maybe I could tell a difference between the two, but if I didn't know the Dracaena was responsible, I would completely believe someone who told me the odor was from the Murraya.

The smell starts up at about 4 PM, when it smells very much like cut grass, with a hint of lilacs. That gets stronger and stronger until about 6:45 PM, when it abruptly switches to the heavy Murraya smell. I have no idea how long the smell will last; individual flowers don't seem to last very long, but there are so many of them. (I'm writing this on 29 November; the show may be completely over by the time you read this. I don't know.)

I've also read a lot of complaints about nectar dripping from the flowers and what a pain it is to deal with; that hasn't really been my experience either. There's nectar, yes. And it does drip. It just doesn't drip in the quantities I've seen described, and as far as I can tell, what little nectar has dripped has mostly landed on the plant itself, or other plants. Which isn't ideal, of course, but it isn't really a problem. Maybe it gets worse later. In any case, the plant room floor is concrete, so even if it does get thoroughly coated in Dracaena nectar, cleanup should be pretty easy. Overall the whole thing has been a lot less of a catastrophe than I was expecting.

The plant in the office has flowers too, the first after 4 years without blooming.
The colleagues (mostly male) complain a lot about the scent. My female colleague and I like it, though. Up to now we have been successful in protecting the flowers from men armed with scissors and knives...
Regards
Elke

It's quite possible that people who don't normally have fragrant houseplants blooming (I'm looking at you, Hoya) report the scent as a lot stronger because they have no comparison. Those of us who are houseplant obsessed, not so much.

PS. The beautiful bud fell off Cyborg Unicorn :( but Stoked has 2 or 3 just starting. Fingers crossed!

Wow, it's really rare to get the blooms indoors! Just outside my backdoor on the patio is a 15ft+ "corn plant", originally a 2ft cutting of a cutting of a cutting of a birthday gift plant many many moons ago that I stuck in the sand about 8 years ago. After a couple of years, it started blooming every December-January (hasn't quite started for me yet this year but the baby spikes are forming). Even outside it's almost overpowering - but there are dozens of spikes blooming at once so it's quite a large quantity of flowers. Have never ever noticed the dripping nectar however - maybe because it's outside and not dripping on the floor. You're spot-on on the comparison with murraya - my front yard is enclosed with an "orange jasmine" hedge about 6ft tall, and the scents are very similar -- the murraya however tends to be a little sweeter and more citrus blossom-like, but the dracaena and murraya both share an annoying trait (for me, anyway) with another denizen of my yard, a giant old night-blooming jasmine. All 3 have an almost cat-urine undertone that gets to me after a while LOL (ESPECIALLY the night-blooming jasmine - which can be detected from about a block away when in its full glory).

The nectar dripping seems to be a function of soil moisture levels in my experience with D. fragrans. If the soil is very moist, more nectar is produced...some plants are dappled with droplets of the stuff all over their upper leaves when the flowers bloom. Others, kept on the dry side in dimly lit conference rooms, don't drip much at all. Some people say the flowering process is a function of low temperatures (45-55 degrees F); I doubt that, because we maintain a lot of these in offices that never get below 65 degrees F. It seems to be a function of short days, as they invariably flower from early October to February indoors in natural or artificial light. I always cut the inflorescences off before they open, because the spent flowers make a mess on carpeted floors that is tough to clean up.