A post is coming up in a few days, which contains, among other things, new photos of Schlumbergera 083A "Psychedelic Bunny." 107A is not as amazing as that, to be sure, but it's one of a few seedlings this year that have had magenta petal margins during all or some of their development, which I don't recall happening previously with any seedlings other than "Psychedelic Bunny."1 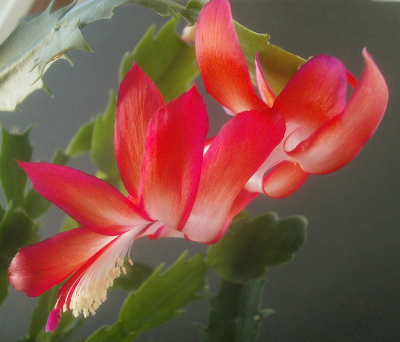 Lipstick is an incredible picture, but is maybe too plain of a name -- any Schlumbergera flower is probably the color of some shade of lipstick or another. Though I was tickled to learn that the German word for "lipstick" is "Lippenstift," which is a great word. German has great words for a lot of things, I'm discovering. (Also Dutch.)

Beautiful Lunch evokes some kind of complicated colorful salad or something, and appeals to me a little bit, but it's probably not a good idea: as far as I know Schlumbergeras are edible, or at least not poisonous, but I probably don't want to encourage people to eat them, either. It's also a little uncool: if you have to tell people your flower is beautiful, it smacks of desperation. Or is that just me? 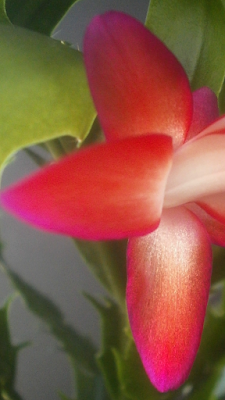 Devilette kind of seems to fit, but I'm a little iffy on both parts of the name: "Devil" would bother some people (OMG a Satanist Schlumbergera!2) and "-ette" makes me think of The Smurfette Principle.

Conversely, Pterosaur doesn't bother me at all as a name, and I don't think it would bother many other people either, but it doesn't feel like it fits this particular seedling very well. 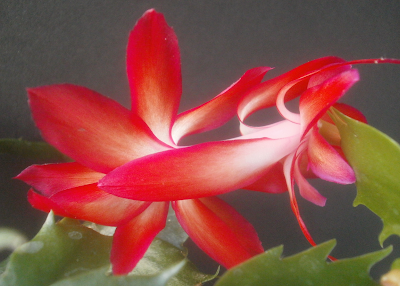 Europa the moon is white and brown; the continent is more colorful but I hear it leans more toward greens and browns. The flower's colors seem a little loud for the mythological figure though what the hell do I know about how mythological figures dress, I suppose. In any case: seems like it could work, but the color associations are all wrong.

Big Bang feels a little vague and dry. Appropriate -- one could argue that it'd be an appropriate name for any Schlumbergera seedling, as they all look somewhat like explosions if viewed from the right angle -- but not very memorable, somehow.

Raspberry Vodka is memorable and somewhat specific as to color, so that's good. I'm a little uncomfortable associating the seedling with alcohol, though I don't quite understand why. 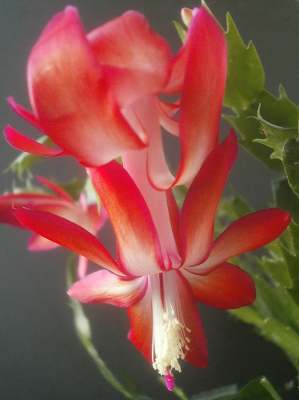 Nova Zembla suggested the alternate option of "Nova Prospekt," because I am on some level determined to name at least one of the seedlings something that relates to Half-Life 2.3, 4 The problem is that "Nova Prospekt," which can be variously translated as "new way," "new road," and "new avenue," depending on what Cyrillic-alphabet-using language you want to use and what sort of spin you want to put on the translation, isn't positive or appealing at all, in-game. As an out of context seedling name, being read by someone unfamiliar with the game, I imagine it comes across as misspelled or nonsensical or both.5 But I still like it.

Carousel Horse was suggested by the photo's "Prancing Horse." I didn't like the latter, but the coloration is pretty perfect for a carousel horse. And it's sort of the opposite situation from Nova Prospekt, in that Nova Prospekt is completely wrong but I want to name the seedling that anyway, while Carousel Horse is exactly right, but I don't want to use it. 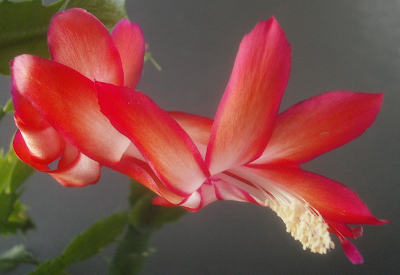 What finally tipped the scales was the realization that I have an awful lot of animal-related seedling names already,6 and I really do love the Half-Life series. So even though it may be a mistake, I'm going to go with Nova Prospekt. If I wind up really hating it later, I can always change it.


1 The other seedlings that have done this: 064A "Rose Hoses," 067A [name TBD], 074A "Vroom," 079A "Yayoi Kusama," 099B "Karma Cobra," 106A [name TBD]. The seed parent, 'Caribbean Dancer,' was observed doing a little of this for the first time this year as well, which explains where they get it from, but not why it's inconsistently expressed.
2 (I am not a Satanist.)
3 Nova Prospekt, in HL2, is a former prison that has been converted to a detention facility by the Combine, the Borg-like transdimensional empire you spend most of your time fighting against in the game. I swear it's a lot less stupid than it sounds.
4 The Anthurium seedlings may have this covered, though, actually: the character you play in the Half-Life games is "Gordon Freeman," and Anthurium 1270 is named "Gorda Freeman." ("Gorda" = fat, in Spanish.) It's awfully specific, but at the same time, there's probably a queen out there somewhere for whom this would be the perfect name. So if that's you, honey, use it with my blessing, and as a bonus, you've got an Anthurium seedling named after you already.
Though if you make a gown based on his HEV suit -- and you ought to -- you have to have to HAVE TO 1) do a good job on it, and 2) send me a picture. Do we have a deal?
5 Nova Zembla itself is the Dutch corruption of the Russian "Novaya Zemlya," ("new land"), a group of islands in the Arctic Ocean, notable for being the site of detonation for the largest atomic weapon ever detonated (the "Tsar Bomba") and for being fucking cold. (Average high temperature in July: 50F/10C. So stop complaining.) For reasons unknown to me, a Rhododendron variety was named 'Nova Zembla,' which is why it came up in my TinEye results in the first place.
6 018A "Nudibranch," 021A "Spider Crab," 025A "Clownfish," 035A "Patito," 083A "Psychedelic Bunny," 084A "Downward-Facing Dog," 088A "Cyborg Unicorn," 091A "Flying Fish," 099B "Karma Cobra," 113A "Helper Dog."
Posted by mr_subjunctive at 3:00 AM

I like Nova Prospekt, both the bloom and the name. I don't play Half-Life or speak German so it roughly translates to new prospect, to me that sounds very hopeful.

The more I think about my suggestion that you sell naming rights, the better I think it is. You've got a potential goldmine.

There's also the factor that naming the seedlings is one of my bigger sources of entertainment lately, and I wouldn't want to hand that over to other people.

Nice seedling. Looking forward to Bunny's blooms -- that is one I would like to grow. I'll try to pop back later and see if anything comes to mind with your unnamed seedlings. Maybe I'll be able to make myself useful.

Ah, I hadn't taken the entertainment factor into account. Carry on!