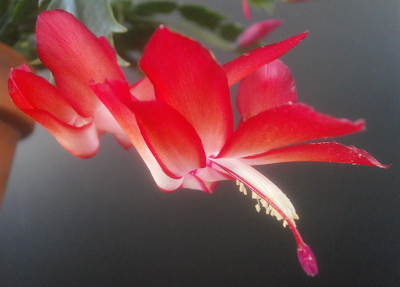 I started out with 30 name options for 079A, but as I picked through them to get the short list, it became clear pretty quickly that there were really only two names I was seriously considering: Yayoi Kusama and Nebula. And really, there was only ever one choice: y'all know I love Kusama. 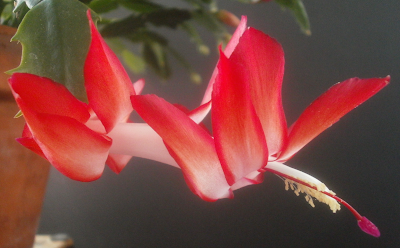 The only reason I hesitate is because Kusama does so much with dots -- dots of pigment, small suspended lights -- and the seedling isn't spotted. She's not really known for doing stuff with pointy shapes, like Schlumbergera petals. 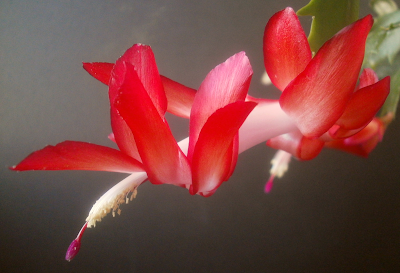 But it's not like I'm ever going to come up with a rounded, polka-dotted plant to name after her -- the closest I could get would be one of the offspring from Anthurium 'Peppermint Gemini,' but there are very few seedlings of 'Peppermint Gemini' to begin with, they may or may not ever bloom,1 if they do bloom it's not likely to happen for a while,2 and if they do bloom and it's soon, I'm not sure I expect them to produce mottled blooms like their seed parent.3 So there's no point holding my breath for a mottled Anthurium to name after Kusama (who isn't a drag queen, and consequently isn't really right for an Anthurium seedling anyway), and I may as well run with this. Therefore: Yayoi Kusama.

Kusama does seem to be fond of the color red, at least. So the seedling is appropriate for her to that degree. 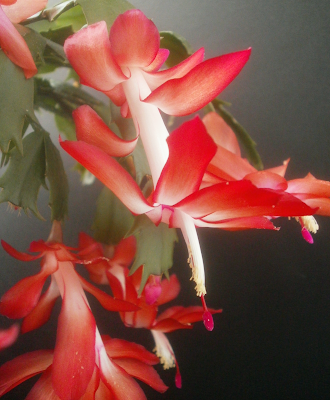 079 is also one of the more prolific pots to bloom this year: lots of blooms, over a reasonably long period of time. (Crowding has kept the bloom rate down for a lot of the seedlings. 079 happens to have gotten one of the better spots.) 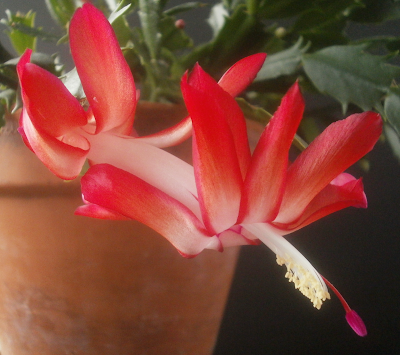 079A has done a little bit of the magenta-margins thing, though there's never a lot of magenta, and it doesn't last long. 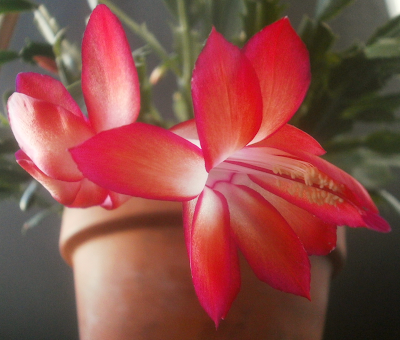 This year, I'm not trying to keep track of which blooms I attempt to pollinate, but I am trying to write down which crosses I attempt. Mostly I'm focusing on crossing the plants that aren't my seedlings, since seedling-seedling crosses have a 50% chance of failure due to the peculiarities of Schlumbergera genetics, but I've still attempted to cross 079A with 021B "Birthday Dinner," 079B [name TBD], and 023A "Stoked." At this point, it looks like one of the three worked, but I don't know which one it was. 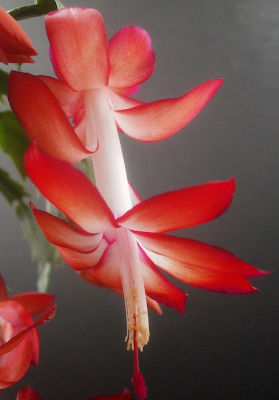 
1 'Peppermint Gemini' itself is very reluctant to rebloom for me. I think it had one bloom open when I bought it in 2013, then opened a bud shortly thereafter for bloom #2. It's produced one flower since then, in July 2014. And that's all. Very disappointing.
2 Based on the average bloom timing -- 28 1/2 months after their sow date, 12 months after being moved to 4-inch pots -- we're getting close. The first two 'Peppermint Gemini' seedlings to be repotted would bud in early January 2016, if they hold to the average timing, and the later three would bloom in late April or early May. However: even if they bud on-schedule, going from bud to open inflorescence takes a while, it's common for first buds to abort, and the earliest two are on flats that have been hit especially hard by the thrips. So the odds of seeing a decent bloom in the next six months seem pretty slim.
3 The Anthurium-breeding book says mottled blooms usually have mottled seedlings, but that the mottling is coarser and blotchier in the offspring.
Posted by mr_subjunctive at 3:00 AM