It seems likely that the repeat orchids (previously: 2012, 2013) are the same specimens, being grown by the same people, coming back to the show year after year, but I've never asked. 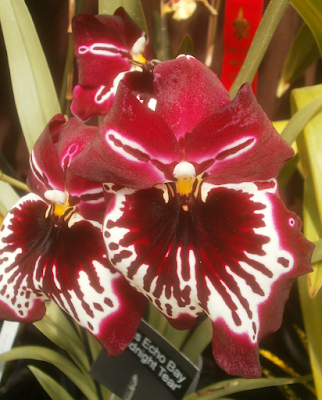 You would think I could just compare the photos from year to year. Does it look like the same plant? Is it the same name tag? Well, then it's probably the same plant. The displays differ from year to year, though, and it's not always possible to get a whole-plant photo to compare. Like, this year, it was pretty difficult to get photos of entire plants without incorporating neighboring foliage and blooms (and ribbons, and name tags, etc.) in the shot as well, so crammed together were many of the displays. And I don't usually keep the pictures of the name tags once they've served their purpose, so I can't look at those either. So I don't know.

I like to imagine they're the same plants coming back year after year, though. Sort of a hey, good to see you, how've you been, mind if I get your picture? kind of thing. Or at least that's how it feels from my end.1


1 I imagine the orchids think something along the lines of Oh, great, *this* asshole again.
Posted by mr_subjunctive at 3:00 AM

It is indeed highly likely that you are seeing many returnees. Orchids -- even hybrids -- tend to have certain seasons when they bloom (though there are exceptions). So shows that occur annually will almost inevitably have a goodly number of orchids which will regularly be in bloom at that time of year.

I REALLY wish I could grow Miltoniopsis, but they just sulk and eventually die. I'd love to know what other people's secret is!

Kev, Miltoniopsis desire cool temps (highs in the low to mid 70s, and lows -- especially at night -- in the 50s), bright light, fairly high humidity (65% or higher), and very good air movement. As such, they aren't really suitable for most of us to grow. Pity.