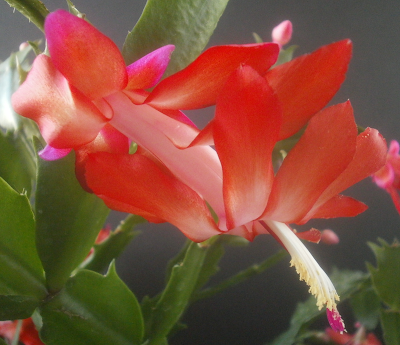 I was unimpressed with "Rose Hoses" last year -- it was fine, sure, but it didn't really do anything for me. But this year, for some reason, it seems a lot better. It doesn't hurt that it threw a little magenta at the margins of its petals, something several of the seedlings this year (and seed parent 'Caribbean Dancer') have done.1 It's still not my favorite seedling, but it's jumped up a few notches. 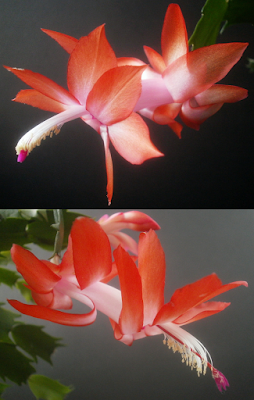 Top: 29 March 2015; Bottom: 22 November 2015.
"Laurie Anderson" tricked me briefly into thinking that there were two seedlings in the pot -- last year's blooms were mainly orange and pink, and this year the same pot produced a combination of orange/pink, orange/white, and red-orange/pink. I mean, it's still possible that there are two seedlings in the pot, but the color ranges of each one overlap to the point where it's just as plausible that they're all the same seedling, so I'm calling the whole pot 073A until I have more solid evidence of multiple seedlings. I have similar problems with 025A "Clownfish," which has been orange/white or orange/pink for me this year.2 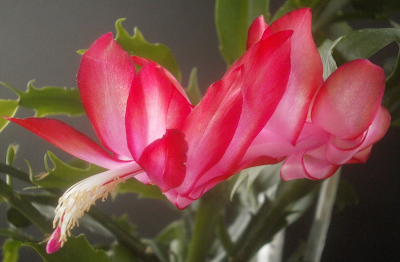 One of the questions I had before the start of Schlumbergera season was whether "Art Party" could make more than one bloom in a season. (I think it made two last year, technically, but I was frustrated at how infrequent they were.) The answer is yes; it's made two already this year, and there are a few buds on the plant still. So that's nice. I was more impressed with the color change, though -- last year the petals tended to be light pink tube / pink / red tip, and this year the blooms are much darker overall, more like magenta / magenta / red. It doesn't photograph as strikingly, but it's prettier in person. Either color version is good, though: even if it isn't loaded with blooms all the time, it's still one of my favorites. 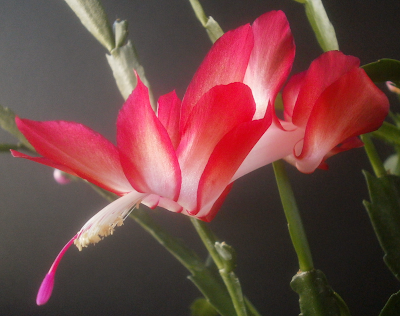 "Strawberry Madeleine" looks the same as last year, but its blooming behavior is different: last year, it made a bunch of blooms late in the year, maybe ten, over the space of a couple weeks, and then was more or less finished. This year, it seems to be pacing itself: since 30 October, it's pretty much always had one or two blooms at any given moment. Never zero, never three. Which is easier for breeding purposes (always a bloom available to accept / shed pollen), if harder to sell. 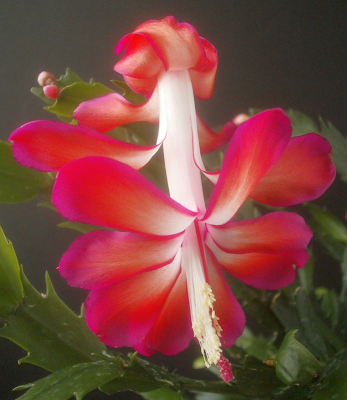 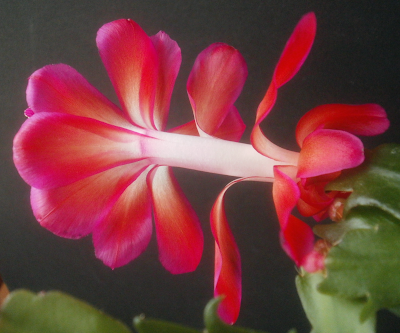 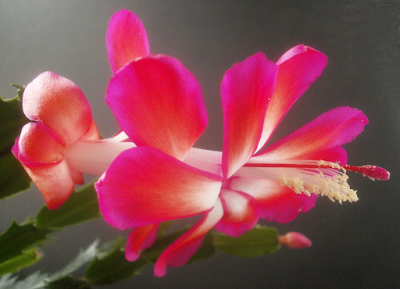 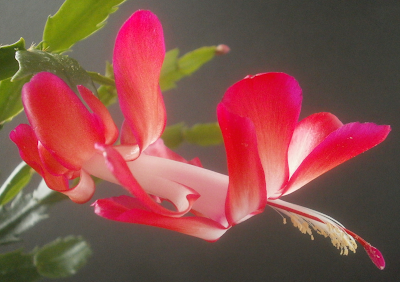 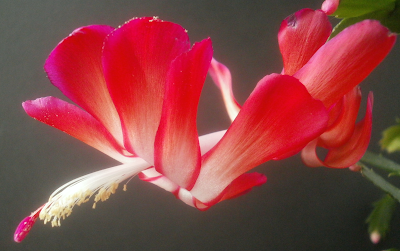 I was looking forward to "Psychedelic Bunny" blooming, obviously, but had pretty much convinced myself that it wasn't that much more incredible than all the other seedlings, I'd just been so surprised by it that I'd exaggerated its magnificence in my memory. But no: it actually is this fantastic, particularly when the bloom first opens.

The camera has trouble with extreme reds and violets: in person, the magenta is darker than this. Equally beautiful, though.

And, of course, this means that now I know what to take cuttings from, so I can make more of them. It's been making me anxious, not having backup copies of "Psychedelic Bunny." 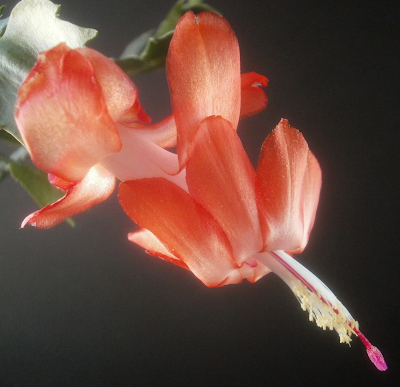 "Downward-Facing Dog" was shaped a little more like a standard Schlumbergera bloom this year. It's still not good, but if it'd been doing this all along, I probably wouldn't have called it a dog. 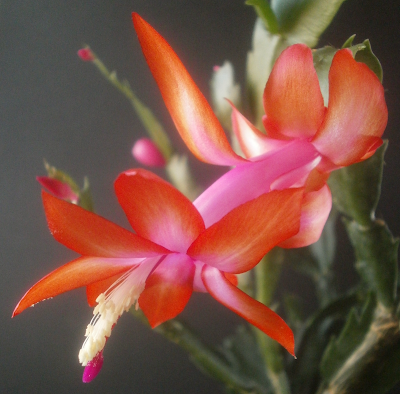 "Cyborg Unicorn" started early, with a remarkably vivid orange/magenta bloom, and . . . then it stopped. I think it's suffering from a lack of light; the low shelf it's on was fine last year, but I've put more plants on the shelf directly above it, so it's probably getting less light than it used to. I should move it to a larger pot anyway; hopefully it won't have to live in the dark much longer. 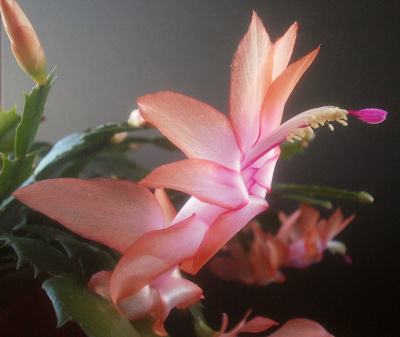 I've mentioned this already, in the post for 099B "Karma Cobra," but "Dessert Room" rebloomed much lighter this year than last year, and was gorgeous.


113A "Helper Dog"
"Helper Dog" has produced blooms in the same colors consistently; it's always a pretty middle of the road orange / pink. What changes are the shapes. Witness this progression of blooms: 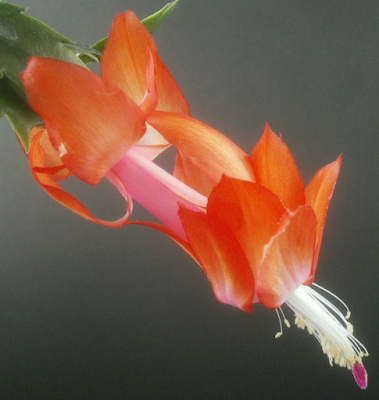 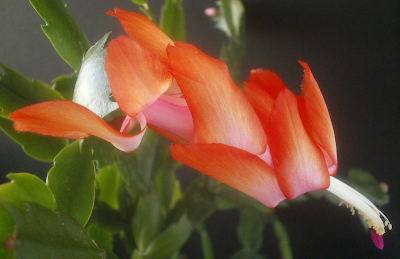 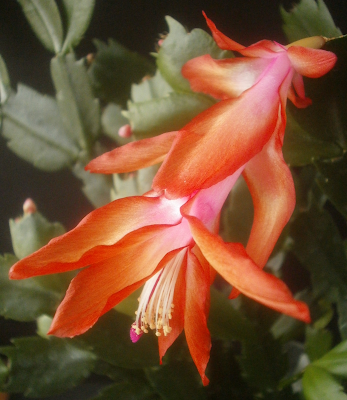 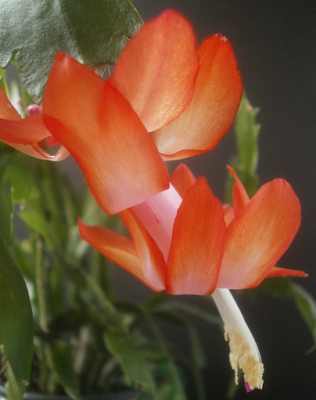 2015-16 season (30 November)
And then by early December, it was back to the first type of bloom again, with the glued-down-looking petals. So "Helper Dog" isn't exactly a dog anymore either, though it's a toss-up as to whether it's going to look like a normal Schlumbergera (the "Jennifer Aniston," if you will), all slicked-back and skinny (the "Carrie-Anne Moss"), or permed all to hell like a long-lost member of Warrant.3 I haven't decided yet how I feel about this.

Give me another ten days to work on it, and I'll give you a third (and final?) unfinished business post, about the parent Schlumbergeras and what they've been up to this year.


1 I hadn't noticed 'Caribbean Dancer' doing this before this year, though in fairness I wasn't looking for it. Neither "Rose Hoses" nor 'Caribbean Dancer' do this consistently, but it's nice of them to do it at all. I just wish I knew how to get them to do it on purpose.
2 A reader reports that their 025A "Clownfish" cuttings produced much redder blooms for them than they did for me. I'm happy that the cuttings were capable of blooming at all, but a little distressed that people aren't getting the colors they asked for.
This is a way that Anthurium-breeding and Schlumbergera-breeding may differ: Anthurium seedlings' blooms may vary a bit in thrips damage and overall size, and the first bloom is often a little different from all the subsequent ones, but once they've decided on a color, shape, and size, they stick with it, even if the growing conditions change. (If the conditions change too much, they'll just stop blooming, rather than produce dramatically different blooms.) As a result, the difficult step in Anthurium-seedling selection is finding a seedling different enough from its parents to be interesting.
In my experience with Schlumbergeras, every seedling looks pretty different from its parents (I'm actually kind of shocked at the range of colors I've gotten from a single cross), and virtually all of them are interesting, but the size, quantity, shape, and color of the blooms vary so much with growing conditions that I'm wondering if consistency isn't the main hurdle to get over. A hybrid will be more commercially valuable if you can predict what it's going to look like when it gets sold: nobody wants to pre-sell retailers a red plant, then invest months of water, fertilizer, and time growing them, only to ship a plant that's closer to orange, magenta, or pink than it is to red.
3 80s hair didn't exactly seem normal at the time -- I remember being struck by what a tremendous amount of effort my female friends were putting into getting everything hair-sprayed just so -- but it didn't seem quite as ludicrously cartoonish as it does from a distance of 30 years.
Posted by mr_subjunctive at 3:00 AM

These are some of the coolest flowers I've seen in a while, especially psychedelic bunny and dessert room!
Have you ever looked into getting a nepenthes pitcher plant?
They are pretty easy to grow, especially the ones you find in normal garden centers.
They like somewhat bright light, medium-high humidity, and kept moist but not sitting in water.
A good first one is N. Ventrata (often sold as N. alata or just tropical pitcher plant, usually in hanging baskets)

We had some occasionally at the ex-job, and I thought they were cool, but I never bought one because they were pricey, I would never have been able to keep one moist (the only plants that survive here are the ones that can get at least somewhat dry between waterings), and dangly hanging-type plants tend to get caught in the wire shelving and tear when I water them.

I had not recalled Bunny having such rounded petals last year. Still one of my favorites of those you've bred.

The earliest pictures of 083A "Psychedelic Bunny" (here) show petals that are a little pointier than the 2015 pictures, but they're still a lot more blunt than most. I wouldn't have thought to check that out if you hadn't mentioned it.

Your Schlumbergeras are all so much prettier than the ones I have/can get in the stores here. Makes me want to start breeding too, even though the last thing I need is more plants, and especially more Schlumbergeras (I've been contemplating throwing them out completely, but then they had buds and I decided I couldn't do that after all.)

i agree bunny has beautifully rounded petals and the color just grabs you instantly the moment you lay eyes on it.