I was just sure that the color on this one, in person, was a lot lighter and yellower than this, but the dried-up flower is as dark or darker, and the photos don't look nearly as light as I remembered, so maybe I'm thinking of some other seedling? They do all sort of blur together after a while. Not that I need to tell you that. (I appreciate your patience with all the seedling posts. Hope you can remain patient through mid-February.1) 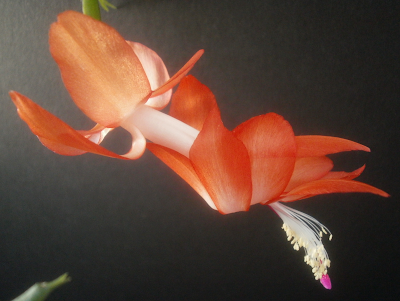 Anyway. I had 33 initial ideas from TinEye, which I narrowed to six that seemed plausible.

In order of elimination: Honey Cowl is out because nobody knows what a cowl is,2 and because "Cowl" is weird to say. Little Cheesy is gone because I was unable to think of a single reason to keep it: it's not wrong, but I just don't like it. Not sure how it made it on the short list in the first place.

I am bothered by Electric Cheetah because actual cheetahs have spots, and this flower does not. And this is really the wrong color for Peach Ice Cream. 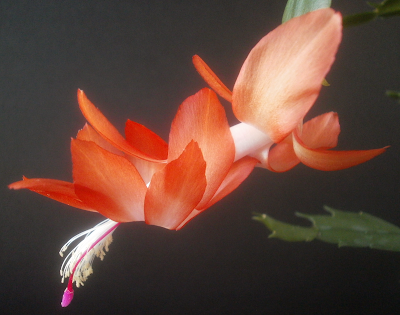 Which leaves either Ginger Beer or Thom Yorke. I've never had ginger beer before,3 but I'm intrigued by its description, and at least some of the photos I found of it online make it look like the color is plausible.

On the other hand, I'm already familiar with Thom Yorke (lead singer for Radiohead), and I like Radiohead, or at least some Radiohead,4 so that seems plausible too. True, Yorke isn't bright orange, but he could be someday.

On the gripping hand, Thom Yorke would be one more musical reference on the list, and he's young enough that he could become a horrible person someday, if he isn't already. Plus: is it really fair to single him out when there are four other members of Radiohead? Probably not. So I guess Ginger Beer.


1 Not a joke, alas. Though at least it's not going to be two and a half months of nothing but Schlumbergeras: there will be some Anthurium seedlings in there too, the orchids will continue, and you'll see the occasional plant that is neither a Schlumbergera nor an Anthurium. So: monotonous, but not quite as monotonous as it maybe sounds. At least they're pretty: 25 new blooms this year (so far), and none of them are "dogs."
2 A hooded monk's robe. If you already knew that, add 5 PATSP points to your previous total.
3 (Never had Thom Yorke before either, as far as that goes.) *rimshot*
4 I like the obvious albums, the ones everybody likes: OK Computer, Kid A, In Rainbows. (I own, but don't especially care for, Amnesiac and Hail to the Thief.) And I like the most obvious songs on the albums I like. So I'm not an interesting Radiohead fan, but I'm still a Radiohead fan.
Posted by mr_subjunctive at 3:00 AM

Personally I tend to use it as meaning a garment's "hood" which I understand is its older def. But you're right, most folks today would be clueless.