Recently, I made a comment that I was increasingly thinking of myself as a Schlumbergera breeder who dabbles in Anthuriums, after thinking the reverse for a long time. The switch may not be permanent -- I still have more Anthuriums, after all -- but November and December have put my relationship with the Anthurium seedlings under more strain than ever before.

Start with the way that the new blooms were mostly crap. Here's Jen's: 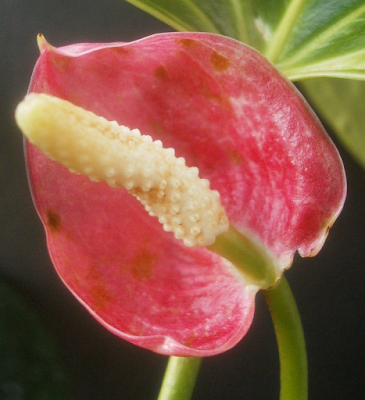 It wouldn't be a good bloom even if it weren't riddled with thrips scars. And they're all like that lately: as of 25 December, eight Anthurium seedlings have produced their first blooms since the Schlumbergera avalanche, and they range from nice but more or less a duplicate (0115 "Erlene Adopter") to oh-my-god-that-barely-even-looks-like-a-spathe (0537 "Bridgette of Madison County").1 All except Erlene have also been dismayingly small.

On top of that, the seedlings that haven't bloomed have likewise had a rough time. I threw out 144 seedlings between November 1 and December 24, most due to scale.2 That's not necessarily unusual by itself -- I throw out seedlings all the time -- but this particular batch is special because I threw out 86 of those in a single day. (The surviving Anthurium seedlings will tell stories about where they were on December 9 for years to come.) Throwing out a seedling here or there barely registers as something I should have feelings about, but 86 at once is depressing.

The point being that while the Schlumbergeras were doing their glorious mostly-orange thing, the Anthuriums were mostly producing tiny, ugly blooms, or being thrown in the garbage. You can see how I might be tempted to say, "oh, no, I just dabble in those shitty plants over there; my real focus is on these plants, with all the pretty blooms and no bug problems." 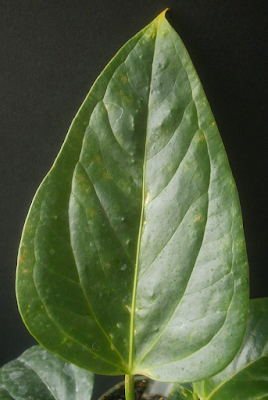 The problem, of course, is that Schlumbergera season is brief. Technically, there has been at least one schlum in bloom every day from late October to at least late December,3 but practically speaking, this year's show began on October 25, peaked around November 15, and was essentially over by December 15. There will be a repeat performance in the spring: based on previous years, it should begin in late March and continue through early May, with a peak in late April, and I'll likely see a few more first-time blooms then, but twelve weeks of frantic activity and forty weeks of nothing in particular isn't the most rewarding plant-growing experience. The Anthuriums have their problems, but at least they're always doing something, in a slow-and-steady-wins-the-race sort of way. 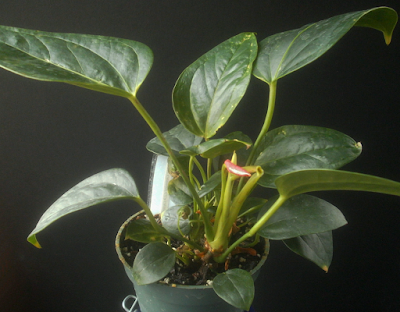 As for Jen specifically, the main problem with her is her bloom, but her leaves aren't great either. Even her good characteristics are bad: she suckers abundantly, which is normally great,4 but when you have a bad plant, the last thing you want is for it to be good at reproducing itself. So she will probably be thrown out, but I'm waiting for a second bloom before I do so. Sometimes second blooms really are a lot nicer than the first.5


1 The list, ordered from most to least acceptable:
0115 "Erlene Adopter"
0366 "Maureen Biologist"
0547 "Cate Sedia"
0527 "Ms. Lucia Love"
0424 "Jen Antonic"
0516 "Brooke Enhart"
0512 "Landon Sky"
0537 "Bridgette of Madison County"
Pictures of each are available in the Anthurium gallery post, if you just can't wait for their individual blog posts.
2 The full breakdown:
• 17 (12%) got too dry.
• 9 (6%) hung around for a long time without ever blooming, and I finally decided I'd waited long enough.
• 4 (3%) were too wet, or something, and rotted.
• 81 (56%) either had visible scale, or I suspected scale because of honeydew or other signs.
• 25 (17%) were stunted or weak, compared to other plants of the same approximate age, and seemed unlikely to ever bloom.
• 2 (1%) were so badly ravaged by thrips that I gave up on them.
• 5 (3%) were old and leggy, to the point where I didn't want to keep them anymore. (I think most of these were also slow or reluctant bloomers: all the categories overlap with one another to some degree.)
• 1 (1%) I don't know what was wrong with it. (Stunted/weak is the most likely explanation, but I didn't write it down so I'm not sure.)
3 (I'm writing this on 29 December)
4 Since I don't have access to tissue culture as a propagation method (and thank goodness I don't! Can you imagine?), any of my seedlings that I decide to propagate will have to be duplicated through cuttings or offsets. So seedlings that sucker well (e.g. 0031 "Sylvester" and 0580 "Marsha Marsha Marsha") have a much better chance of making it to the retail world than the non-offsetting seedlings, even though some of my non-offsetters are otherwise much better plants (e.g. 0002 "Alexis Mateo" or 0231 "Rhea Listick").
5 Example: 0416 "Holy McGrail." First bloom: 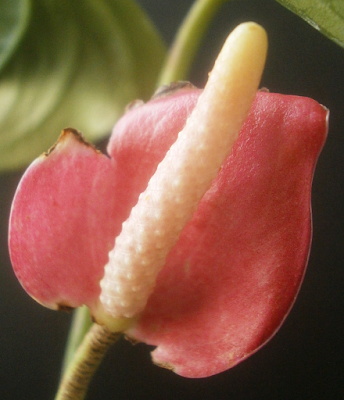 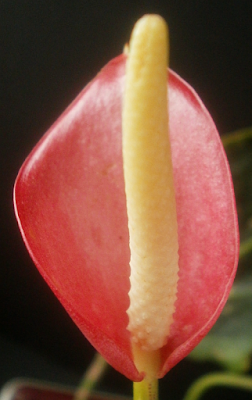 I mean, I'm not saying the second one is some rare, amazing beauty and I'm so happy I didn't throw her out after the first bloom, but the third bloom is undeniably nicer than the first two.
(UPDATE 1/16/16: I didn't realize when I wrote this that the nicest bloom from 0416 was actually its third. This was the second bloom, which is in fact worse than either the first or the third:) 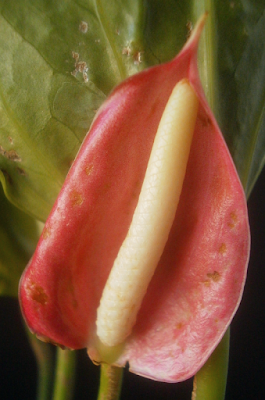 I understand why you are currently preferring Schlumbergeras but I'm struggling with mine. Cyborg unicorn grew a nice bud and then... dropped it. Stoked had three buds yesterday and then... dropped the largest one. ARGH! [It's interesting how far behind mine are compared to yours...]

But all of my Anthuriums are blooming and one of my African violets just finished while another is resting and the third is going strong. African violets are so easy (yes, I know how you feel about them). I should really try to get a Bloom Day post together this month.