So the actual plant here isn't that unusual, but the more I see the name "Hoku Mama Swamp," the more I love it. She's a faux queen (a female performance artist who uses the style conventions associated with drag queens, i.e. a female female impersonator; other faux queens whose names you've seen before are Holy McGrail and Ms. Lucia Love.).

I initially had some trouble accepting the idea of faux queens (where's the challenge in a woman looking like a woman?), but am totally on board now, because I'm seeing the whole thing as a set of conventions, the way someone is recognizable as a clown if they do enough things that signify "clown:" white makeup with an exaggerated red grin, red nose, baggy and colorful clothing, floppy shoes, etc. Queens do queeny things instead of clowny things, but it's the same kind of deal: if the wig, clothing, makeup, and so forth all add up to "queen," the actual original gender of the performer isn't really relevant. (If it looks like a duck, and quacks like a duck, etc.) It's not any more remarkable that someone can do drag-queen things and wind up looking like a drag queen any more than it's remarkable that someone can wear a black-and-white striped shirt, white gloves, black pants, paint their face white, and look like a mime. So I welcome the faux queens, personally.

That having been said, I think Hoku's name is more interesting than she is, at least of the things I found of hers on YouTube. Liked some of them, didn't like others. (Here is one of the videos that worked for me, despite the low quality recording. It starts slow, too, so if you're bored, try skipping ahead a couple minutes and see if you like that any better.)

Similarly, I generally approve of Hoku the seedling, though there are definitely some things she could be doing better. The bloom color is red / white, which is boring but well-executed. 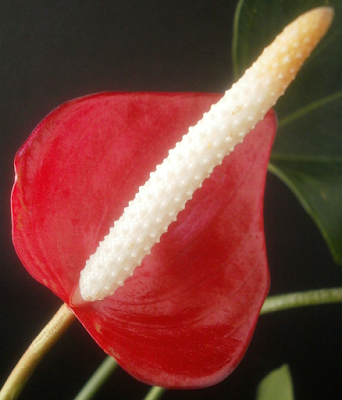 Her most notable feature is her size: both the individual leaves and the plant as a whole are gigantic. No offsetting, which is sort of a problem. Not crazy about the internodal distance either, though considering how old she is (sow date: 5 May 2012), she's not sprawling. 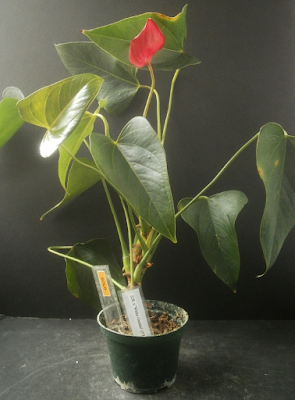 The foliage isn't perfect, but it's one of the better seedlings for resisting scale and thrips damage. Top 10% or so, anyway. 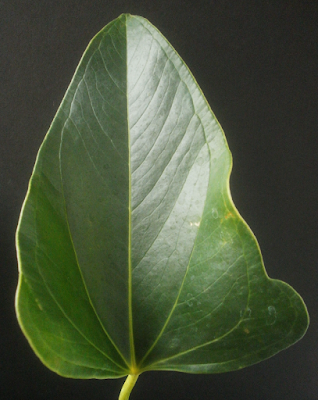 The biggest challenge the leaves face, I think, is mechanical damage -- plants with large leaves on long petioles easily get caught on things and tangled in other plants, sometimes resulting in injuries. And injuries accumulate over time, so. 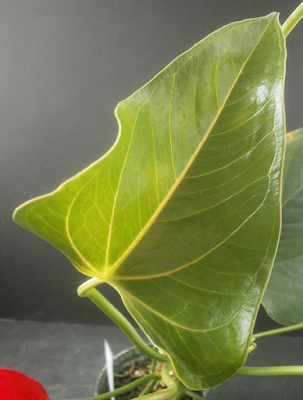 I want to keep Hoku, but I'm not sure about her long-term prospects. She's badly underpotted already, as you can see from the whole-plant photo, and as she becomes more and more rootbound, the soil's going to dry out faster and faster. I don't have room to move any more plants up to 6-inch (15 cm) pots, though, and even if I did, she'd take up a disproportionate amount of room. It's hard to justify using that much space for a seedling that's just another red / white.

On the other hand, she's at least a nice red / white. And I wouldn't mind keeping some big-leaf, thrips-/scale-resistance genes handy. So I imagine her fate depends on how much space I can find in the basement in the next few months.