First phrag from the 2016 show. They weren't well-represented in my photos this year, though there were plenty around: they're tougher to photograph than Paphiopedilums (which are easier for my autofocus to deal with, because of their flatter "faces"). 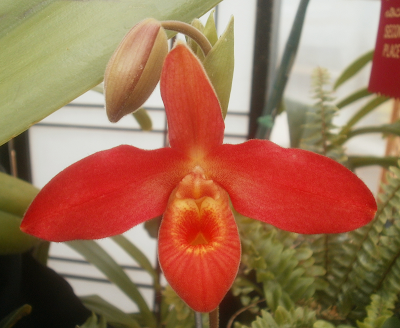 Don't have a lot to say about it; the color's pretty nice, I guess. Tag was misspelled, again. *sigh*

Should also mention, for the orchid fans in the audience, that Kev's Orchids has a lot of orchid photos too, and unlike me, he's blogging about his own plants (with the occasional non-orchid) and knows something about how to grow them. I'm partial to Phalaenopsis Corning's Violet (can that really be the bloom color?), Prosthechea Green Hornet x Epicattleya Miva Etoile 'Noire,' and Coelogyne usitana, but there are plenty of others to look at, so go check it out.

Hey, your blog is fantastic. If you ever decide to stop writing it, make sure it doesn't disappear from web as it's one of best resources I've ever found.

Thank you for the shameless plug! Much appreciated, especially from someone I consider to be a veritable mine of information himself!