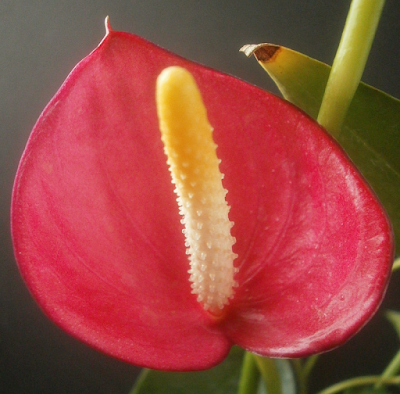 Good enough to promote to a 6-inch pot, anyway. The leaves are interesting, 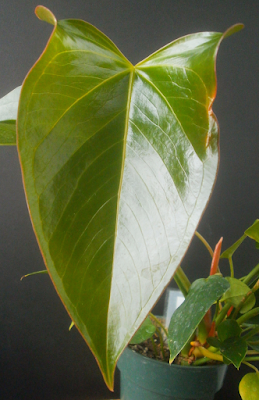 (This is also a particularly good example of one of the five types of venation the seedlings produce: "fishbone."1
The plant as a whole is okay; there's plenty of suckering, 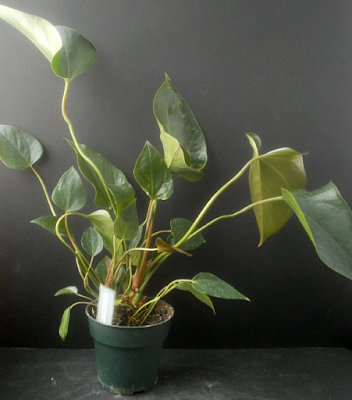 though I'd be happier with more consistent petiole length, and you can see a little bit of thrips damage here and there.

No real question about whether to keep Leo: I've already told you I moved him to a 6-inch pot. The single bloom to date has been cross-pollinated. We'll see what comes of it.2


1 They're my own categories, and I'm still working out how to think about foliage: it's perfectly clear to me that the leaves vary from seedling to seedling, and that the veining is part of the reason they look different, but actually assigning the individual seedlings to distinct categories is tougher than you would think.
Anthurium seedlings produce different leaves as they reach maturity, and it's not always obvious when a seedling has switched from juvenile to mature leaves; also plenty of seedlings have characteristics of more than one category. Leaves look different in different photos, too, and thrips damage can twist leaves so badly that it becomes basically impossible to determine what kind of leaves a plant is trying to make. So nothing about this is exact or particularly scientific. With all those caveats in place, here are some of the more extreme examples of the five types I've identified:

In "flat" venation, the only very prominent vein is the midvein (sometimes also there's a vein running on either side of the midvein that's about the same thickness), and even the midvein is narrow compared to the midveins on other seedlings' leaves. It's also usually the same color as the rest of the leaf, though occasionally they're slightly red. "Flat" leaves are rarely literally flat; they often fold along the midvein, or cup around where the petiole attaches to the leaf. And the flatness is not really the point: the point is that the midvein is relatively narrow, and doesn't stand out.
Juvenile leaves are almost always flat.
Flat seems to be most common with descendants of the NOID red, though the NOID red-violet, 'Red Hot,' and the NOID purple all have leaves closer to flat than to any of the other categories, and a number of other parents lean toward flatness. (The parents are harder to fit into specific foliage categories than the seedlings, so a lot of them have aspects of more than one category.) 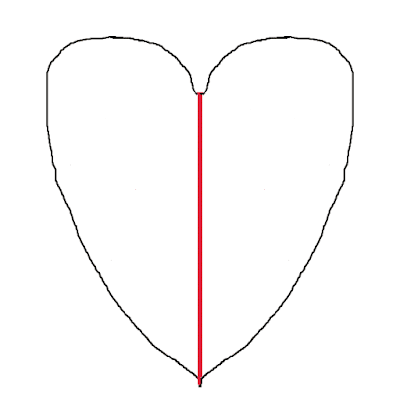 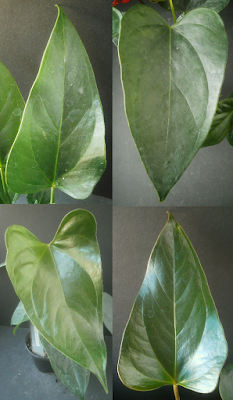 ("Flat" leaves, clockwise from top left: 0346 Lois Carmen DiNominatre, 0365 Murray Hill, 0597 Raven, 0380 Ewan Watarmi)
"Star" venation has a thicker midvein, as well as one or two pairs of thick, large veins which radiate out from a single point. Usually the veins are also lighter than the rest of the leaf, and the areas between the large veins are fairly smooth, without much visible veining.
This is the most common type among the parents: 'Gemini,' 'White Gemini,' 'Peppermint Gemini,' 'Pandola,' 'Joli,' and 'Krypton' are all stars; consequently, star veining is useless for trying to guess at pollen parentage. I mean, none of the types of veining are ever conclusive, but star is even less helpful than usual. 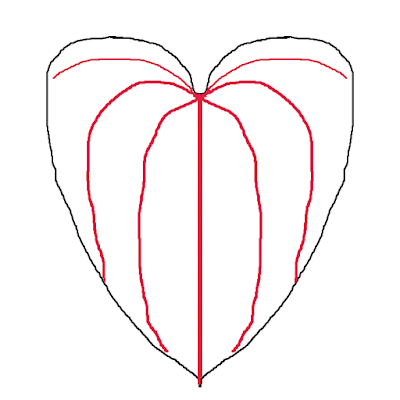 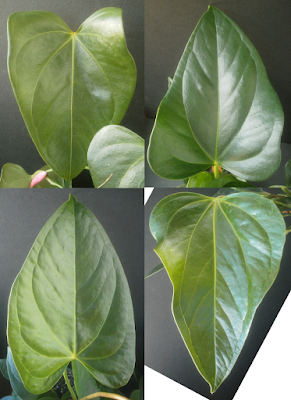 ("Star" leaves, clockwise from top left: 0095 Clarice Fullhartz, 0206 Marcia Dimes, 0467 Regina Fong, 0245 Sawyer Ad)
"Lizard," on the other hand, is uncommon: it's more or less like flat except that all the secondary veins are wider and slightly sunken, giving the leaf a pebbled texture that I think resembles lizard skin or alligator skin. The leaves are usually thicker and heavier with lizards, too.
No parent variety is solidly a lizard. The NOID red, 'Gemini,' and 'White Gemini' all have lizardy tendencies, though. The most common spathe color is red, though there's one pink lizard, 0275 Yvette Horizon. Lizard is my favorite kind of venation, though I think that's more because I like the heavier weight of the leaves than because I care about the pattern itself. 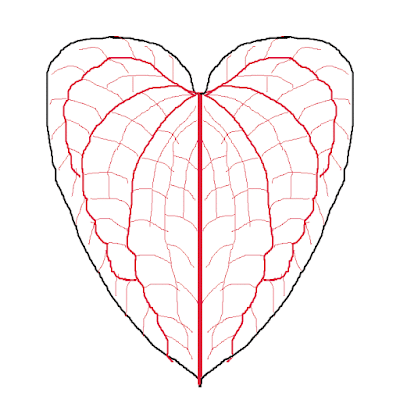 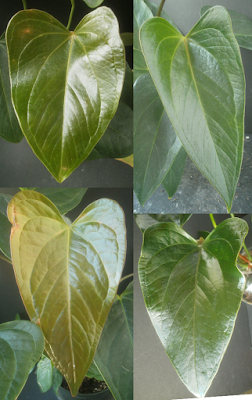 ("Lizard" leaves, clockwise from top left: 0072 Beth Rowe, 0076 Bob Humbug, 0203 Anna Mae Hemensouz, 0275 Yvette Horizon)
"Quilted" is like "star:" the midvein and one or two pairs of other large veins all radiate from a single point. The difference is that with "quilted," there are visible veins dividing up the different sections created by the main veins, and within those different sections, the veins are slightly sunken relative to the rest of the leaf, giving a quilted appearance. Hence the name.
The NOID pink, 'Florida,' 'Orange Hot,' and NOID green-pink all have some degree of quilting going on; it seems to be particularly common with orangish seedlings. (Oh yeah -- I'm now wondering whether 'Florida' might not have pollinated some of the seedlings after all. I'll have to explain some other time.) 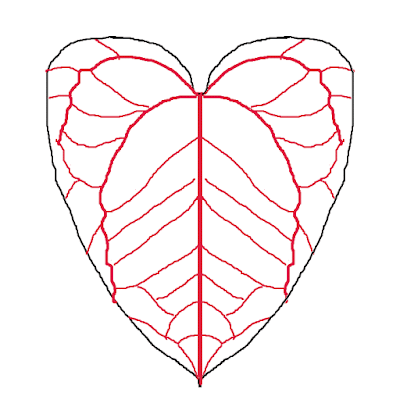 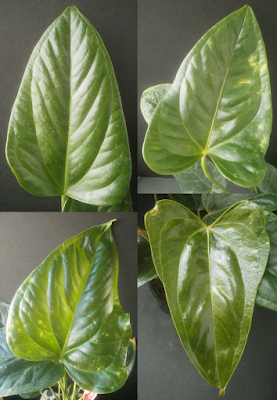 ("Quilted" leaves, clockwise from top left: 0171 Genevieve La Difference, 0317 Dred, 0328 Polly Esther Blend, 0408 Tex Messich)
Last, "fishbone" venation resembles "flat" in that the only prominent vein is the midrib, but there are also small but easily visible secondary veins running parallel to one another to each side of the midrib.
This isn't the main texture for any of the parent plants, but the NOID pink, NOID green-pink, NOID purple, and 'White Gemini' all have some inclination toward fishbone veining. No particular color preferences for fishbone seedlings that I'm aware of. 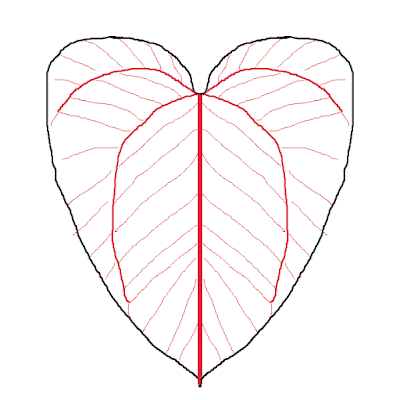 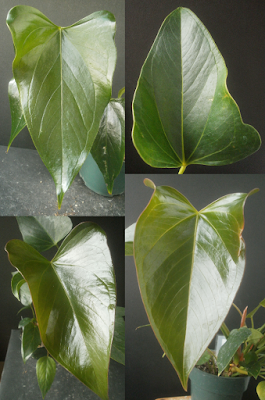 ("Fishbone" leaves, clockwise from top left: 0005 Chad Michaels, 0228 Hoku Mama Swamp, 0263 Leo Long, 0276 Zach Religious)
I think the same basic pattern of veins (a midvein, three pairs of primary veins coming from the petiole, etc.) is present regardless of the seedling, and the differences are mainly a matter of which are most visible (because they're a different color, thickened, or slightly raised or lowered): they're not so drastically different from one another that I'd expect everybody (or anybody, really) to notice, but it's relevant to me, because it still makes a difference in how the plant as a whole looks.
As spathes are modified leaves, it's also possible that the leaf venation has subtle effects on how the spathes look. I haven't checked that out yet.
2 Though we're getting enough plants in bloom at once that targeted, specific crosses are, or soon will be, a possibility.
I've held off targeted crosses partly because I like the randomizing that comes from trying to pollinate with pollen from multiple plants at once, but it sure looks like there have been a few cases where the pollen parent was the same for a whole seedling group anyway, e.g. the AZ and BA seedling groups all came out dark red / yellow, and BF and BH have produced a lot of small and shitty pink or red blooms. If I'm going to get the same bloom over and over again anyway, I suppose I may as well know what cross produced it.
Posted by mr_subjunctive at 3:00 AM

Your striving a to categorize leaf shape I found interesting. Reminds me of talks with AV or hosta folks. : )