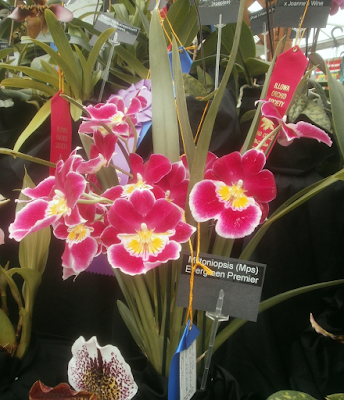 I can't confirm that the plant was identified correctly. The only on-line source I could find with any picture of an "Evergreen Premier" was seattleorchid.com, but neither the genus nor the photos match in that case. The genus name may or may not be relevant -- the International Orchid Registry lists Miltonia as a synonym for this plant -- but the photo still seems relevant. Feels to me like either that one, or this one, has to be misidentified, though I suppose it's also possible that we're looking at different clones from the same grex. 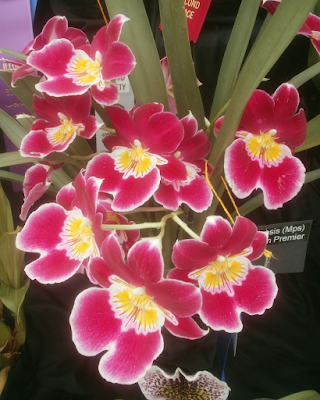 In unrelated news, a couple of comments about the previous post:

I did start, or try to start, cuttings from the 'Caribbean Dancer' that imploded. (Nine pots' worth, at nine or ten cuttings per pot, because I expect a lot of them to fail.) The one branch that survived the implosion remains intact, which I wasn't expecting, but I'm not sure it matters long-term: it seems too heavy to be able to hold itself up even if it's fine, and there are some indications that its lower segments are rotting, just like on the other branches, and the rot is just slower in this particular case.

There are indications that the Aloe variegata with root rot might have at least a small root system in place now. It doesn't come out of the soil if I pull on it gently, at least. Since I've had pretty crappy luck with Aloes w/r/t scale,1 I may decide to throw it out anyway -- and I probably ought to2 -- but the decision is still up in the air for the moment.

It's certainly possible that the potting soil for the Beaucarnea recurvata held water too well; I think I probably mixed in some "aquatic soil" / bits of fired clay when I up-potted it, but I don't remember for sure, and obviously the plant isn't around to ask anymore. I also have a hazy memory of it being in a spot where water was draining directly into the pot from overhead when I first put it outside, but I moved it out of the way once I noticed, and it grew fine for two or three months afterward. Doesn't mean that wasn't still the problem, but cause and effect are difficult to disentangle in cases like this.


1 And although I had forgotten about it, my records tell me that I threw out an A. variegata in October 2013 because of scale, so I know the species isn't immune.
2 I've toyed with the idea of throwing out all the plants, infested or not, that come from genera that the scale seem to like: Agave, Aloe, Haworthia, Gasterworthia, whatever Yuccas I can bear to part with. Haven't done it yet. Maybe won't. I mean, the most obvious solution here is to throw a bunch of plants out, and if I'm doing that, then the plants I should throw out should be the ones I expect to make me unhappy later. But it's hard to punish plants for crimes they haven't committed yet.
An alternate plan is/was to throw out every plant that is not currently delightful: all the plants I've been hanging onto in the hopes that they'd turn themselves around and look nice again, all the plants that I know will eventually look shitty in the future because that's just how that plant's habit is or whatever, all the plants where I've ever thought to myself, oh, I should probably just throw that one out. Same problem with that plan, though.
Posted by mr_subjunctive at 3:00 AM

Unrelated to the plants, I guess, but footnote #2 did not function for me. #1 did function. I tried several times and even refreshed the page and #2 did not work. On Chrome, if that makes a difference.

Thanks for letting me know. Should work now.