The plants will just not give me a break. The latest "fuck you" from the plants came from my Schlumbergera 'Caribbean Dancer,' seed parent to all of the Schlumbergera seedlings that have bloomed so far. I've had the plant since December 2008, and the photos I have of it vary wildly in quality, but I'm sure you'll get the idea anyway. 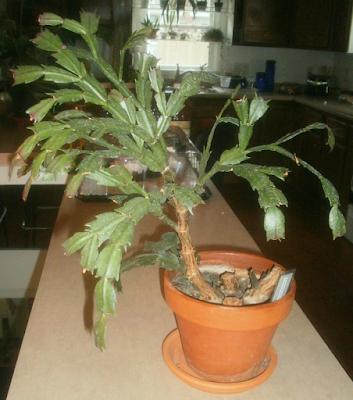 And I don't expect that the existing branch is going to remain for very long.

The decline was quick: it takes eight and a half years to grow a plant out that big, but they only need a week to disintegrate. I don't know what I did. It's been in the same location, receiving the same light, in the same pot, getting watered in exactly the same way and at the same times, for at least the last four or five years.

People occasionally say to me things like, oh, it must be wonderful to have so many plants, to be surrounded by all that LIFE and GROWTH and BEAUTY all the time. It's never actually felt that way to me, but people say it. Lately, though, it actually has been feeling like I'm surrounded by death, disease, and ugliness all the time, and it's right there in my house so I can't even get away from it. Just in the last three months: 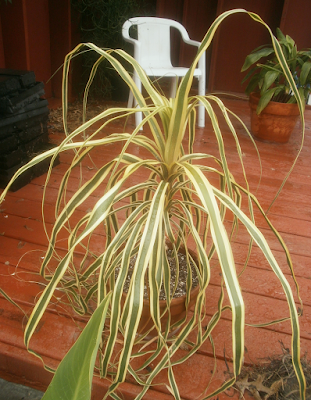 I had a gigantic and lovely variegated Beaucarnea recurvata, which spent last summer outside and grew rampantly. It was amazing. Then I brought it in for the winter and it spent several months continuously defoliating, because (I eventually learned) its roots had all rotted out, probably because I'd up-potted it before moving it outside, and so it got thrown out in mid-January.

Before the 'Caribbean Dancer,' the salmon-peach NOID (likely pollen parent for all/most of the seedlings) suddenly shriveled and turned red. Nothing dropped off: it just kept getting more and more slumped and shriveled, and then the fruits started drying up and falling off. Threw it out at the end of April, when it finally became clear to me that the reason I hadn't seen any new growth was because the plant was in fact genuinely dead. 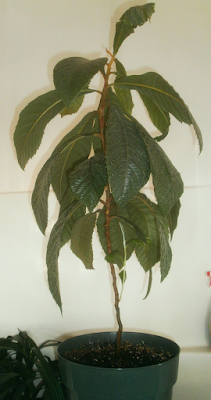 My surviving Eriobotrya japonica has always had a problem with spider mites to some degree or another, but they'd stayed more or less manageable, enough that I figured it was worth holding on to and just spraying with soapy water from time to time or whatever. And then at about the same time it had finally gotten large enough to start branching, the mite population exploded and I was like, do I really want to be fighting spider mites for the rest of my life? So it was gone in late January.

The Yucca guatemalensis in the plant room, multiple pots of a yellow-margined version I've had since 2001, had gotten scale in 2013 or 2014, I can't even remember which, and after trying to get rid of the scale with rubbing alcohol and various other things, I finally just cut the heads clear off and made them start over. Which worked! Kind of! As of last fall, they'd resprouted and grown enough new leaves to reach the point of kind of looking like plants again, and, well, you know how this story has to end so I'm not even going to bother finishing the sentence. (February or March, I can't remember)

An Aloe variegata from May 2008, and a Sansevieria hargesiana from May 2010, both given to me by friends from my days back at Garden Web, had both quietly been letting their roots rot away below the soil without saying anything. I'm trying to reroot both of them, on the grounds that even though I don't feel like it now, I may someday be happy that I did it anyway, but it feels pointless and I'm not necessarily going to stick with it long enough to recover the plants. (late March / early April)

Both specimens of my Columnea orientandina are falling apart all of a sudden; one is probably too dry, but the other one I have no idea what its problem is.

Every remaining division I had from an Agave victoriae-reginae I bought in April 2010 turned out to have scale and had to be thrown away. (mid- to late March)

The Murraya paniculata seedling (previously) has thrips, which makes a 1) new species with a problem, 2) new genus with a problem, and 3) new area of the house confirmed to have thrips. (late April?)

And those are just the high points. (Low points? Main points.)

I've talked before about the Texas Effect and how it's not necessarily a huge deal for things to be going badly with the plant collection, since any plant collection this size is going to have good things and bad things happening at the same time and mostly they cancel out. Well, they're not cancelling out anymore. The 'Caribbean Dancer' collapse is the last straw. I haven't figured out what "last straw" means, precisely, but . . . something. There will be changes.

Anyway. So there's also a Schlumbergera seedling to name today. 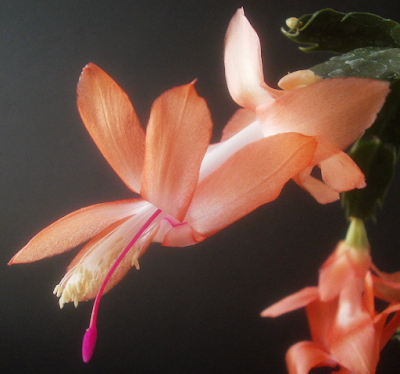 Obviously I don't feel like putting a ton of effort into the naming process at the moment. My first thought was Last Straw, but I had left a note for myself earlier that the previously-considered Circus Peanut would work well for this one, it being a lighter orange than most. So I'll say Circus Peanut. But my heart isn't in it. 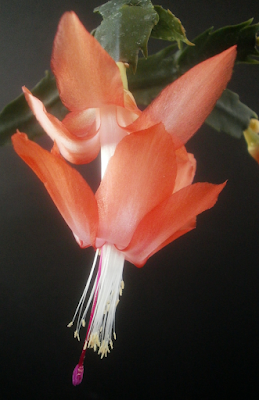 Sorry about your current trials and tribulations. That blows.

From the photo, doesn't look like there is anything wrong with the remaining section of Carribean Dancer. Seems like there are all sorts of possible stimuli which can trigger "shattering" in Schlums. We're the other pieces salvageable? I probably would have just started a new pot.

Many cacti/succs are quite salvageable. Typically cut away any rotting tissue. Allow to callus for a week or more, then repot keeping the plant in a warm, bright indirectly lit area with mistings of the media until it has rerouted. Wonder if the media you used for the B.recurvata was simply to water retentive? It may have been salvageable. The Aloe definitely would be....just let it callous over for a week or two and use a much coarser media this time. (Definitely don't use any of that MiracleGrow Cactus soil or similar garbage.

Man, this is so sad! I can't think of any consoling words for so much loss.