So. I got some seeds from one or more Gasteria bicolor plants in I think November 2012. I sowed them, several germinated and grew, and then they kept growing. Not all that unexpected so far, but in the first post, I noted that it was possible that the seeds were hybrids -- the original plants were identified as Gasteria bicolor, and sure looked like Gasteria bicolor to me, but I didn't know who the pollen parent was (the seed parents didn't belong to me, and the person they did belong to didn't know).

I also said that there was a good chance I'd never find out whether they were hybrids or not, because my track record with Gasterias was that I usually overwatered them.

And now, roughly four years after acquiring the seeds, I can say that it sure looks to me like they're hybrids. I didn't overwater them (yet), is one indication they're not G. bicolor. Another is that they're all at least a little different from one another. Sometimes a lot different.

Some of them look more or less like the species, or barely lighter than the species: 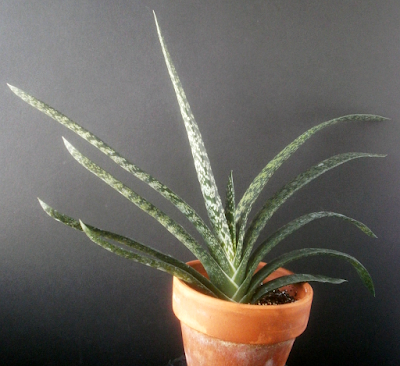 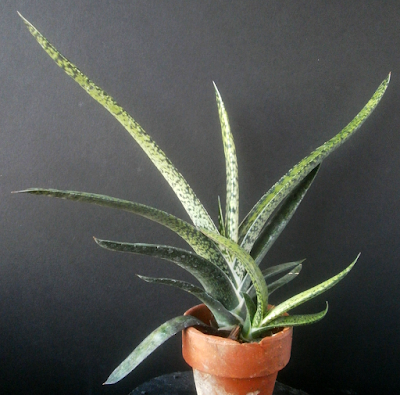 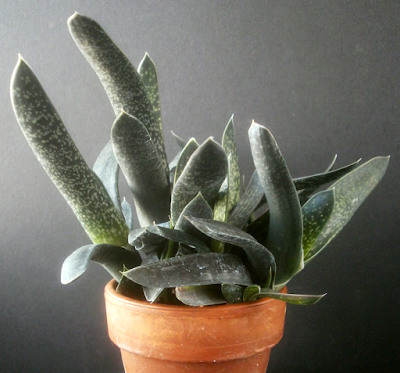 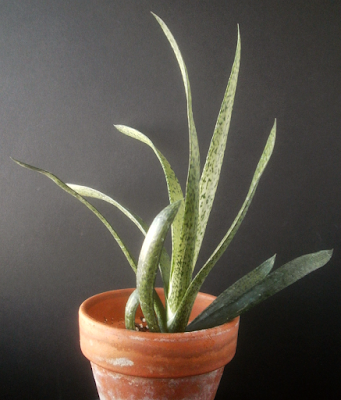 (4" / 10 cm pot)
So I guess at least some of the blooms had been pollinated by something that wasn't Gasteria bicolor. So far, I kind of like the last one best, at least as far as color, but it's not an offsetter so it may not be propagatable.

Also so far: no scale detected on any of them. Doesn't mean scale aren't there,1, but I haven't seen them. Considering that my Gasterworthias and Gasteraloes have had an easier time in general with the scale than the Haworthias and Aloes, I'm sort of inclined to think/hope that maybe Gasteria genes make plants less palatable to the scale. In any case, I'm hoping to be able to keep a seedling or two as long-term residents, which will be easier to do if the scale leaves them alone.

I've gotten a similar result from a different set of seeds (which I will leave unidentified in the interest of building mystery) recently, but in that case there's much more variation among the offspring, which makes much less sense: it was a self-pollination from a plant which, up until pretty recently, I had been confident was a species. The seedlings are cool, and one of very few things the plant collection has done lately to make me happy.2 I'll show you toward the end of May.


1 (It could just be that by their bumpy and spotty nature, Gasterias provide better camouflage for scale than related plants in othere genera.)
2 (
Veeeerrrry few. Like, possibly the only.)
Posted by mr_subjunctive at 3:00 AM

Considering how long the leaves on yours appear to be, I was expecting you to say it was a Gasteraloe.

Looks like you have some G bicolor x G pulchra hybrids.