Schlumbergera seedlings don't usually need "practice blooms" like Anthurium seedlings do; for the most part, the first flower is like the later flowers will be, and I don't need to do a lot of guessing about what they might wind up doing later on. So although 098A only made the one flower this year, odds are pretty good that the slightly stretched-out shape, with the petals divided into a front half and a back half, will be seen in future blooms. 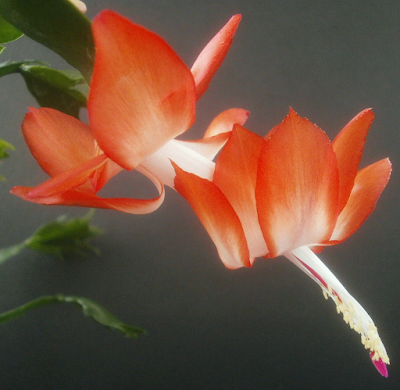 The problem, of course, is that there's always the possibility that this one will be an exception, and will do something substantially different next year. So I need a name that gestures non-comittally in the direction of the slightly odd shape, without actually promising a slightly odd shape. To that end, I'm going to dispense with the categories and try to come up with a name the old-fashioned way: by looking at a thing, then choosing words to describe the thing.

So when I look at this flower, what is it that comes to mind exactly? Well, the back half of the petals sort of brings to mind a ballerina's tutu. They're not ordinarily hunter orange, granted. But maybe that's useful. Hunting Tutu, or something along those lines?

The extended, tightly-packed anthers and stigma sort of evoke a chameleon, or frog -- one of those animals that shoots out a long, sticky-tipped tongue to catch and eat insects. Chameleons are rarely orange, though, and searches for orange frogs mostly turned up depressing Wikipedia entries about extinct or nearly extinct amphibians, which were actually mostly yellow anyway. There are some orange or red-orange poison dart frogs, though, and they do shoot their tongues out to catch insects --


-- so . . . maybe a name that has something to do with poison dart frogs? But what? (Also, a warning: searching for anything having to do with poison dart frogs will reveal a surprisingly large and robust poison-dart-frog hobbyist community. Very easy to get sucked in and lose an hour.) For all the information about the frogs, it was difficult to find a straightforward list of species with photos.1

The best option I could come up with, frogwise, was a relatively common (?) species, Phyllobates terribilis, the orange form of which is called "Orange Terribilis" in the frog trade. Though I expect to find out eventually that Latin is forbidden by whatever authority recognizes and approves cultivar names, it's possible that English/Latin is acceptable. And in any case I cannot afford to get sucked into any more poison dart frog sites, lest I start wanting some.2

So that's two possibilities. What would be a third? Well, it's kind of cheating, because most Schlumbergera flowers have it to some degree or another, but 098A has that windswept, petals-thrown-back thing going on, at least in these pictures. So what's orange and white and blows in the wind? Well, amazingly, Wikipedia has a list of flags organized by color, and it contains exactly one orange-and-white flag: that of Fukushima Prefecture, Japan.

So that's kind of emotionally fraught. The people of Fukushima are, of course, not responsible for the earthquake and tsunami, but the fact remains that people get irrational about radiation,3 and "Fukushima" basically means "radiation" now to a lot of people, so it would probably not work out well commercially, however it was intended.

Further pursuit of orange flags found a site that claimed that Salt Lake City, Utah, was providing blaze orange flags for pedestrians at crosswalks, to wave around while they cross and give them greater visibility to drivers. Which seemed like it would eventually wind up being counterproductive.4 Other cities have tried the idea, with mixed results -- Seattle didn't notice it made a difference, and couldn't evaluate certain locations because people kept stealing the flags; almost nobody used them in Berkeley, California (only 2%), and many of the people who did use them stole them (Ref.) -- and I can't tell whether SLC is still using them or not. In any case, I'm thinking that instead of Fukushima, I'll go with Pedestrian as the flag-related name option, even though most cities seem to be going with yellow flags instead of orange. 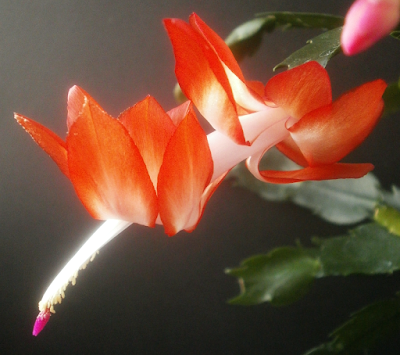 So that's three. This post is feeling kind of long already, so maybe it's time to stop and pick one.

Pedestrian kind of works -- it's also maybe a subtle dig at 098A being just another orange bloom, by way of the "undistinguished; ordinary" meaning of "pedestrian." And it's also a common, familiar word. That all also makes it a less exciting choice, though.

Hunting Tutu is . . . well, I wish I had a way to just show you the mental image I have of this, because it is delightful. (This is the closest I could find via search, though I was picturing a different material: something heavier and more opaque, that would hold up longer in a game-hunting situation.) But it's also maybe a little too pointedly weird.5

Orange Terribilis has the Latin problem, and I've been trying not to use the bloom color in the names.6 It's also longer than the others.

I suppose I could roll the last two together into Terribilis Tutu. But that's awful.

Yeah. It's awful. Pretty sure. But so what then?

I don't know. I'd planned for this post to go up on 8 May, and it's already 6 PM on 7 May, and I still have a lot of watering to do, so I should just pick something. So . . . I guess if I'm being honest with myself, of the three and a half options here, I'm feeling the most drawn to Hunting Tutu, as in, "Larry gathered his knife, rifle, and hunting tutu."7 Not really altogether happy with it, but I have to choose something, and I'm too wiped out right now (long day, long story; everything's fine, though) to try to generate additional options. So there it is.


1 Some of the problem may be that many of the species have multiple color forms. As with plants, people tend to be more interested in the pretty colors than in getting the names right, and the world of poison dart frog hobbyists isn't immune to taxonomic upheaval either. So one can kind of understand why species names wouldn't be foremost on everybody's minds. Still doesn't excuse the lack of reference galleries.
2 Though I do wonder how good they'd be at handling thrips. The "poison" part wouldn't even necessarily be a problem, since they're not necessarily poisonous -- it looks from a quick skim like wild-collected frogs are knock-you-dead poisonous if eaten or handled, but they lose their toxicity one to three years after collection, and captive-bred frogs aren't toxic at all. I mean, Sheba would still be a concern, and I really doubt the conditions in the house are suitable for their long-term survival anyway. One only has just so much money for buying frog corpses. But the thrips situation has me thinking further and further outside the box, especially now that it's spread to the Schlumbergeras. And it's not like I haven't considered frog-administered services before. (This is my million-dollar idea, I can feel it. I just have to get the details right. . . .)
3 By which I mean that there's very little understanding of how widespread radiation actually is, and how much radiation it takes for something to be dangerous. This xkcd image illustrates both pretty well.
4 If you get drivers expecting to see pedestrians carrying flags, then don't you make the pedestrians who aren't carrying flags harder to see, and more likely to be hit?
5 Oh! Speaking of pointedly weird / tutus! I ran across this video from the Cincinnati Ballet a few days ago and thought of you. There's a quick moment at 0:46 that makes me laugh every time, and the stretch from 1:04 to 1:50 is pretty good too:


6 Perhaps it would be more accurate to say I've been trying not to use common color words in the names: "red," "orange," "pink," that sort of thing. 064A Rose Hoses, 022A Sad Tomato, 055A Pumpkin Festival, 082A Strawberry Madeleine, 208A Raspberry Possum, 058B Buff Orpington, and 103A Ginger Beer could all count as me directly naming a color in the seedling name.
7 And emphatically not in the sense of "Larry looked around. The Archbishop was nearby; he could feel it. But which direction? And why was he hunting Tutu in the first place?"
Posted by mr_subjunctive at 3:00 AM

I keep looking at the crack between my stove and the countertop and how it collects crumbs and wishing I could rent an army ant, uh, army to clean my kitchen. I wonder if they'd eat thrips. There's your business model. You just have to figure out how to collect them when they're done cleaning kitchens and infested plant collections.

You should add Eastern Newt juvenile "red eft", Notophthalmus viridescens as an option in your names. I saw one while hiking in the Smoky Mountains. The one I saw was just about the same color orange as many of your photos of your seedlings. I think it was probably the most 'orange' thing I've ever seen. I have a couple of very pedestrian photos, but Google will do it better. So a 'Winged Eft' 'Teenage Newt' or play with translating the Latin :)

Oh darn, I hope you keep 'Hunting Tutu II' as an option for future seedlings because the name kicks all sorts of ass (especially for a bright orange Schlum) and it'd be a shame to waste it on a mediocre specimen.