So, most pictures I found on-line of Rhynchostylis gigantea show white flowers with varying amounts of magenta or purple, in the form of dots, blotches, and labella. Except when they're solid purple, magenta, or white. And there is also a variety, R. gigantea var. vivaphandhul, which is apparently orange and pink. And, well, 'Orange Star' is apparently also pink sometimes, despite the name,1 and now I'm adding my photos of this pale pink/coral bloom. 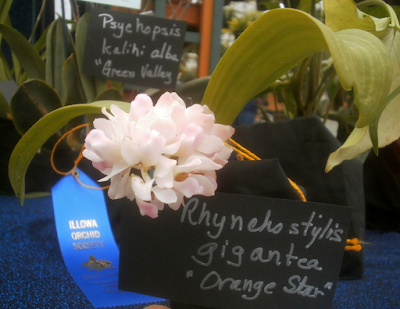 As strange as it is to have a species that can bloom in so many different patterns and so many different colors, the ID is apparently legit: it's just a species with a very large natural range2 and lots of different clones available. They're also, as the name would suggest, and the linked photos earlier will attest, capable of becoming very large, though this particular specimen was small, maybe a foot / 0.3 meters in diameter at most. Bloom spikes can have hundreds of individual flowers on them, and of course there can be several bloom spikes to a plant. 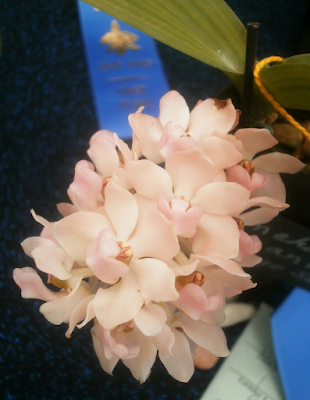 They're also supposed to be strongly, sweetly fragrant; it's apparently incredible. I don't remember noticing any smell from this plant at the show, though. So I've seen a specimen of an enormous plant that grows huge, many-flowered, highly fragrant spikes of white/magenta/pink/purple/orange flowers, without getting any of the actual experience of seeing an enormous plant with huge, many-flowered, highly-fragrant spikes of white/magenta/pink/purple/orange flowers.


1 In fact, I wasn't able to find a photo of 'Orange Star' that I would call orange; the orangest photos I saw were of var. vivaphandhul. Why did someone name this pink-flowering plant "Orange Star" when it is not orange?
Ah. There I go again, expecting orchid names to make sense. I should know this by now.
2 Wikipedia: "Myanmar, Thailand, Malaysia, Laos, Cambodia, Vietnam, Hainan China, Borneo, Bangladesh and the Philippines"
Posted by mr_subjunctive at 3:00 AM

As you surmised, this species does have an enormous amount of flower coloration.

Many fragrant orchids are only fragrant at certain times of day. Also light and temp can play a significant role with some orchids. I have noticed when working orchid shows that some otherwise very fragrant flowers will have little to no fragrance. The cooler indoor temps and/or the indoor lighting (fine for human sight but pathetically weak or wrong spectrum from a plant's "point of view") seems to generally be the issue in such cases where time of day isn't the problem.