It's been a long time since I mentioned it, but I did get an Aglaonema to grow from a self-produced seed once. I got berries (almost certainly self-pollinated) from a plant in late 2011, and the first had germinated by March 2012. By October 2012, I'd gotten three seedlings, though one never did very well and eventually died, and a second one developed what looked like a ring spot virus so I threw it out. The third one, though, is now four years old and multi-stemmed: 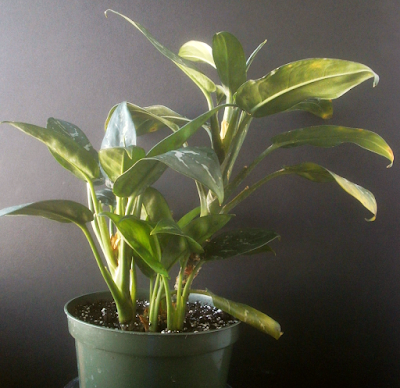 It isn't an amazing-looking plant. I don't especially like this particular variety of Aglaonema (which I've seen identified as 'Marianne' and 'Maria,' probably a few other names too -- it's an old cultivar). Didn't really need more of them. On the other hand, being grown from seed gives it some novelty value.

Had the option been open to me, I would be an Aglaonema breeder instead of an Anthurium / Schlumbergera breeder, because I like the genus generally, and I have a lot of them,1 but this particular variety doesn't do much for me. Sadly, although my ags bloom just fine, usually in spooky unison no matter where they live in the house,2 and the spadices develop bumpy bits that look for all the world like tiny developing berries, nothing ever comes of it: the developing berries dry up and die, and then that's it until the next mass blooming.

I saw something on-line a long time ago that said the plants need really high humidity while berries develop, so that could be the problem, though 1) it's not like we have low humidity in the house, and 2) I don't have a way to increase it, so if that's the hitch then I guess this is the only Aglaonema I'm going to grow from seed. Once, I tried enclosing a bloom in a plastic bag along with a damp paper towel; it didn't help.

If only they could decide to bloom in the summer, I could put them all outside and they'd have all the humidity they could ever want. But no. So ag-breeding is something I only get to do in my dreams. Maybe someday.


1 Mostly NOIDs, but my best guesses for names are: 'Maria,' 'Stripes,' 'Sparkling Sarah,' 'Peacock,' 'Diamond Bay,' 'Gold Dust,' 'Brilliant,' 'Cory,' 'Jewel of India,' 'Jubilee,' 'Silverado,' 'Red Gold,' 'Silver Queen,' and 'Emerald Bay.' When I say I like the genus generally, I'm not fucking around: I really like the genus. The white-stemmed cvv. ('Peacock,' 'Brilliant,' 'Cory,' 'Sparkling Sarah') are particularly great.
2 And not even at the same times of year necessarily: historically it's been mostly January and/or October, depending on the year, but for some reason this year they've all decided to go in April as well.
Posted by mr_subjunctive at 3:00 AM