I've mentioned Deanne once before; the context was that I was talking about the varying colors of the seedlings' new leaves. Deanne's have been, at times, a sort of purple-red. The color didn't photograph very accurately, and doesn't even seem to be a consistent thing from one leaf to the next, but it was interesting enough to save her from a few purges. I didn't think this necessarily indicated anything about the bloom color -- the seedlings with brown new leaves don't bloom brown; the seedlings with red new leaves don't necessarily bloom red.1 But behold: 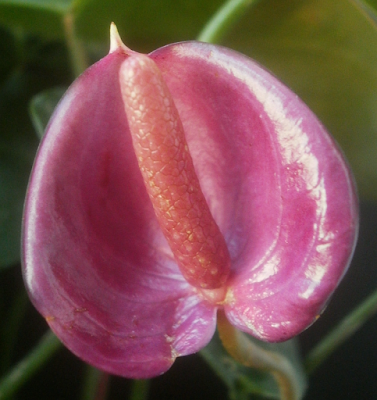 Which makes Deanne one of a very small number of indisputably purple seedlings. And it's about damned time.2

Deanne holds the record for the longest time from sowing to first bud (54 months), and I haven't seen a second bud yet. Her foliage is abundant, 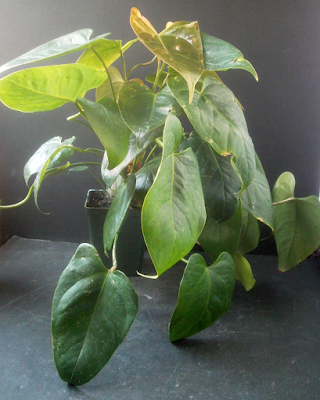 but shabby. Both the little raised bumps on the leaves and the flat brown patches are, I think, thrips damage. It's possible that the bumps are from something else, but the only alternate explanation I can think of would be scale, and I don't think I've seen much scale on Deanne.3 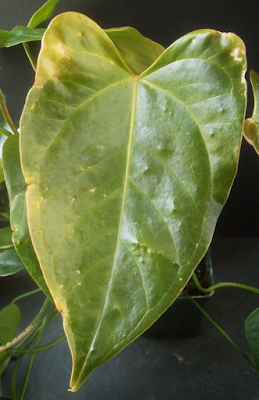 I tried to pollinate the spadix, of course, and it looked like maybe I'd been very minimally successful, with one or two berries possibly beginning to form, but then the whole inflorescence died anyway. So I don't get any seeds yet. Maybe eventually, though. Fingers crossed. I suspect that if I moved her to a larger pot, I'd see some buds pretty quickly, but not only am I out of shelf space right now, we're getting very close to the point when the few plants that got to spend the summer outside will have to come inside again. I desperately want to, but I can't figure out how to promote Deanne. I may be forced to throw out some of the less-impressive 6-inch plants.

So Deanne is slow to bud, didn't manage to produce seeds the one time she flowered, has kind of crappy/buggy foliage, and is not only a rare main color (purple) but an entirely new color combination (purple / orange4). She also stayed more or less purple as the spathe aged, unlike Mario Speedwagon.5

The progression as the spathe opened. Images are from (top to bottom:) July 9, 11, 12, and 16.
Unusually strong flaws, unusually strong virtues. Deanne is not quite the purple seedling I've been waiting for, but I'm still pretty excited, and obviously she's a keeper.


1 (Though some do. There are so many red-blooming seedlings that it would be remarkable if the spathes never matched the new leaves.)
2 The only other one I'm certain about is 0200 Mario Speedwagon; most days, I would also include 0386 Violet Chachki. Several other seedlings have violet tendencies, but I tend to think of them as being primarily pink or red, just a slightly purplish shade of pink or red. Draw your own lines to separate purple from non-purple below, if you like: 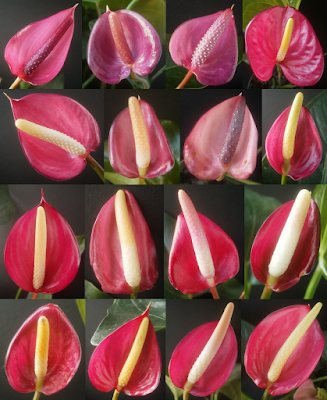 Top row: 0386 Violet Chachki, 0105 Deanne T. Christ, 0200 Mario Speedwagon, 0231 Rhea Listick.
Second row: 0085 Carson Trucks, 0515 Diane Torr, 0480 Walterina Markova, 0406 Tricia Nullmaritch.
Third row: 0259 Tasha Salad, 0534 Celia Putty, 0333 Isaiah Littleprayer, 0514 Lauren Ipsum.
Bottom row: 0610 Nina Levin, 0234 Ross Koz, 0547 Cate Sedia, 0206 Marcia Dimes.
3 Admittedly, it's difficult to keep straight exactly how scale-infested all the seedlings are and ever have been. There are a lot of them, the severity of the problem fluctuates, and the seedlings below number 600 have all been around for a long time.
The scale situation has been, overall, pretty good lately, partly because I threw imidacloprid at basically all the Anthuriums at once, and it actually seems to have worked. Perhaps. Better than I was expecting, anyway. I'm not under any illusions that the scale is gone, but the imidacloprid has certainly made a difference. (Forgive me, Ginny. If I had anything else that worked. . . .)
I have also tried spraying a pyrethroid downstairs, for the thrips. It does not appear to have done had any effect, though it was probably not operating at full strength anyway: it was an old bottle, which had been stored outside in the heat, and I only sprayed it on the plants once. Expecting to see something happen was probably delusional.
4 Well. "Orange" is maybe an exaggeration. I'm not actually sure what color to call that spadix, but by comparison to 0200 Mario Speedwagon's spadix, it's much less purple and much more orange. Look back at footnote 2 again if you need to.
5 Mario starts out a very nice, solid, purple, which lasts for less than a week before he turns noticeably pinker. Very old spathes start turning a bit green as well, ultimately landing on an unattractive muddy orange. 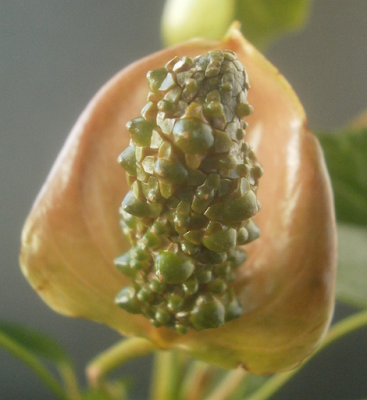 Deanne's spathe didn't get that old, so I don't know what colors it would have eventually turned, and I didn't get any photos of it after the first week or so that the spathe was open, but my memory is that it was a grayish-purple, but still purple, when it died. With some brown thrips scarring.
Both Deanne and Mario have the NOID purple as their seed parent. Which I suppose is kind of obvious. 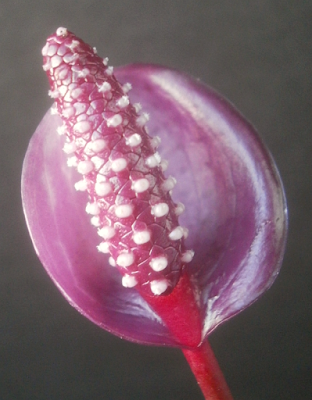 The NOID purple.
Posted by mr_subjunctive at 3:00 AM

As far as accurately getting colors--> Have you tried tweaking the photos manually in Irfanview? May be more trouble than it's worth for you, but I run into off-color issues a lot when photographing paintings (well, that, and the fact that you simply can't capture iridescence in a photo). Irfanview's option of Image->Color Correction->Gamma balance helps a lot.

I have, and pretty much always do, if the photo is far enough away from reality. Most of the time, manual color adjustment works (it's helpful to take the pictures against a known neutral background: if I can see that the background, which is supposed to be black, is actually a little yellowish, then I know I probably need to add some blue), but sometimes it doesn't, for one reason or another. The new-leaf picture I linked to is still pretty close, just not quite lining up with reality. Looking at it now, it's possible that I would have nailed it if I had barely increased the saturation and barely decreased the green.

Perhaps you could put together a simple little colour checker card?

The idea has occurred to me, though it's never gotten any further than that. Knowing that the background is supposed to be black is usually enough to reveal when the lighting is off. (Irfanview also has a thing where if you're in the color correction editor and you click on a pixel, it will automatically adjust the color balance of the whole photo to make that pixel some shade of gray. This isn't usually directly useful for me, as the photos are grainy enough that adjacent pixels can be very differently-tinted, but if I do it multiple times and watch the numbers as it adjusts the RGB values, I can usually figure out approximately what I need to do to get the overall average to gray, and by how much.)

I also try to do the photos at basically the same time every day (I usually start between 11:45 AM and 12:30 PM), which makes it easier to correct for color bias because it's usually the same color bias all the time: I almost always need to add a little bit of blue and subtract a smaller bit of green.