Landon surprised me a bit. 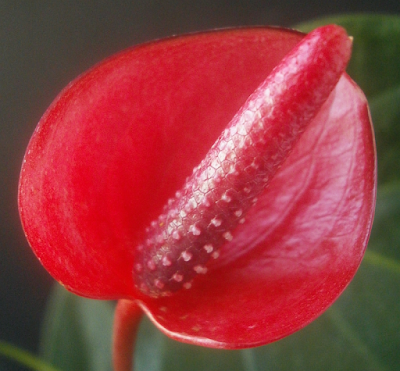 In particular, I was surprised by how similar he was to some of the first-generation plants, which also had red spathes and purple spadices: 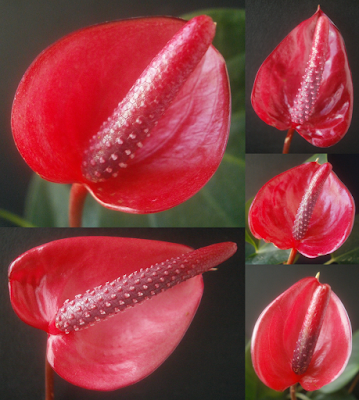 Clockwise from top left: 0698 Landon Cider, 0110 Delta Badhand, 0108 Deena Sequins, 0112 Dottie A. Rebel, 0046 Aurora Boreanaz
And this coloration has showed up on some of the seedlings to bloom after Landon as well. So when I was wondering, a long time ago, whether I'd ever managed to get any 'Red Hot' genes in the mix, I guess I must have. Either that, or many genetic roads lead to red / purple. 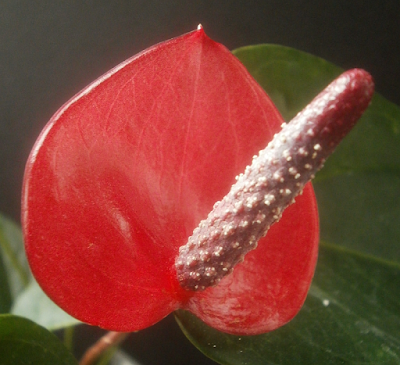 I've also been pleasantly surprised at how Landon's bloom has aged. The spathe hasn't flipped backwards, it hasn't been ravaged by thrips, it hasn't cracked along the margins, it just keeps on looking unspectacular but decent. It even makes pollen!1 The leaves, too, seem to be thrips-resistant, which is always nice: 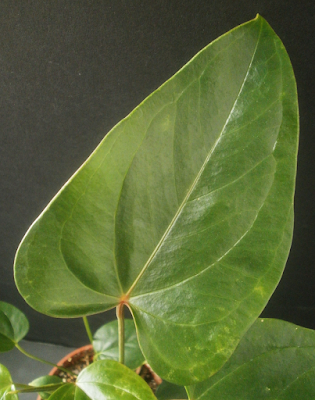 And the plant as a whole is okay. The internodes are maybe a little long, but that seems to be an issue for a lot of the second-generation seedlings.2 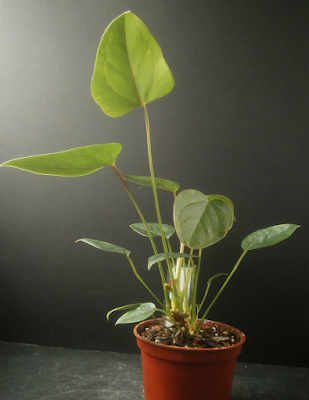 Landon is in seed group BQ (from 0005 Chad Michaels, sow date 25 August 2014), along with 0694 Brad Romance and at least three other blooming seedlings you'll meet later on.

So far, the BQ story is: there were a lot of them (58), they had a high mortality rate (only 9 survive), and the 5 survivors who have bloomed so far have all produced blooms of average or above average quality. The best is probably 0694 Brad Romance.3 Which makes me wonder what could have been, had the dead ones been luckier, but there's nothing I can do about that now so I try not to dwell on it.

0005 Chad Michaels (center) with its offspring 0694 Brad Romance (left) and 0698 Landon Cider (right). Neither child strikes me as looking much like its parent, aside from being generally Anthurium-shaped. But maybe I'm being too picky.
Verdict: Landon's a keeper; hopefully he'll produce some offspring who share his better qualities.
-


1 Irritatingly, it seems like somewhere between a half and two-thirds of the seedlings I've come up with never produce any pollen. Some of this is probably because I get impatient and try to pollinate the female flowers as soon as they appear, with the result that the male flowers never form, and if I would just leave the inflorescences alone long enough I would get pollen from them too. But when I have made a point of leaving the spadices alone so they can make pollen, many of them still don't.
The point being that when a seedling does obviously produce pollen, it immediately becomes a little more valuable to me even if it's otherwise crappy. Not that I should be using pollen from crappy seedlings, but there are still moments when I need a good seedling pollinated, and literally only one Anthurium in the house is making pollen. Since it can sometimes be a very long time between blooms, I figure it's better to use pollen from a bad seedling than run the risk of never being able to get seeds from a good seedling.
Landon, of course, was already a pretty good seedling, so the fact that he also makes pollen means he's even better than he looks.
2 It's especially a problem for the seedlings from 0108 Deena Sequins, a lot of which is probably my own fault: I remember noticing that a lot of Deena's seedlings looked weird and leggy in the germination containers, and I think I remember potting them up anyway, just to see what they'd end up doing. So the news here is probably just "when you pot up leggy baby plants, you get leggy mature plants."
0108 Deena Sequins isn't the seed parent in this particular case, though she could be the pollen parent.
3 Though as he ages, Brad has made it clear that he's going to be huge. I personally like the really big plants (big-leaved Anthuriums are my Alocasia/Colocasia methadone), but they do take up a lot of space that I don't have, so when a new gigantic seedling reveals itself, I have a tough time settling on an emotional reaction. It winds up being like, hooray-and-also-oh-no.
Posted by mr_subjunctive at 3:00 AM

What a dirty little name! A logical consequence of Brad Romance I 'spose. :)

Now you have me wondering whether there's something going on with the name that I'm not seeing. (I see how it could be sorta dirty; I'm unclear how it would be unusually dirty.)

Have you tried refrigerating some pollen? There are plants with which pollen can be kept viable for months if placed in a fridge. Whether Anthuriums would work out, but could be worth a try.

I've thought about it, but there's usually so little pollen on a spadix that I kinda stalled out at the "but how would I store it" stage.

The Anthurium-breeders' guide doesn't mention refrigerating pollen at all, whether to say it's possible or im-. I take this as a sign that it's at least not often done, though I suppose there could be a lot of reasons for that.

If you were to try it, I'd suggest using either one of those super small zip lock type bags or a vial.