Tara is one of two plants from the same flat, which bloomed at basically the same time, and had blooms of almost exactly the same shape and size. The colors were slightly different, but otherwise the blooms were basically identical, and that was weird. Tara's blooms, on their own, aren't anything we haven't seen before, really: 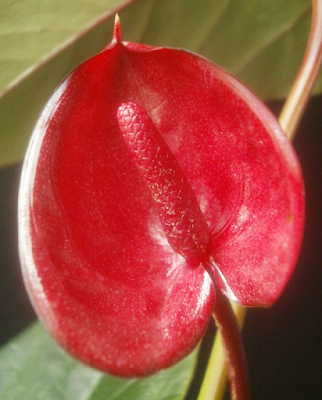 Red / red,1 decent shape, not a lot of scarring, but ordinary.

Where Tara manages to distinguish herself is in her leaves, specifically one side of the leaves. The tops are fine; nothing to get too excited about, though they at least appear to be fairly thrips-resistant. 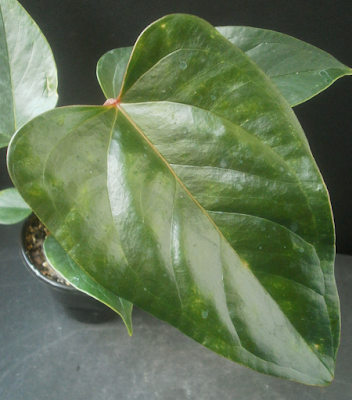 But if you (literally!) turn over a new leaf, you get this: 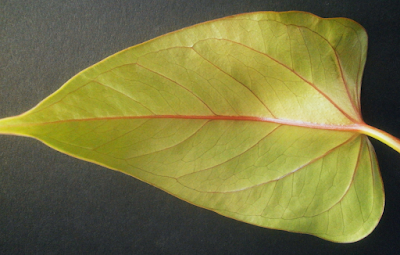 The oldest leaves are plain green on both sides, but I don't know whether that means that the red veining disappears over time, or that they never had red veining to begin with (like maybe the red veining only appears on plants once they hit a certain age, the way that plants only begin blooming once they're old enough to bloom). I don't remember seeing red veining before the newest leaf, and its veins are still red six weeks after the above photo was taken, so if the color fades, it must fade slowly. I'll definitely be watching this seedling closely for a while.2

For a plant that's blooming already, there are surprisingly few leaves: 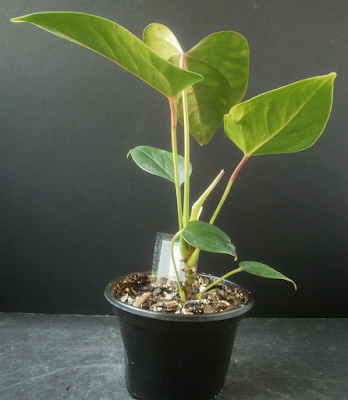 And I'm a little disappointed by the lack of suckering. But the red veining is more than enough to make up for any number of flaws, so Tara is pretty clearly a keeper. It would make me very happy to be able to breed an Anthurium that has permanent strong red veining on the leaves. (Ideally the veining would be on the top, not the underside, but I shouldn't ask for the moon.)


1 Though it ages to red / purple. Here's the same bloom a month later: 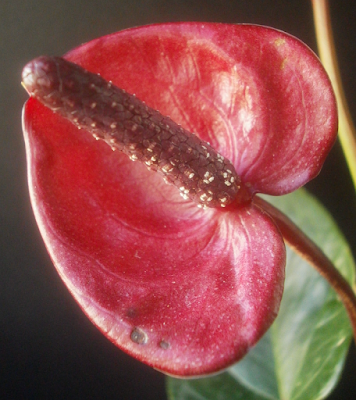 I'm pretty confident that the two (three?) dark pits in the lower left corner are not bug damage, though I'm not sure what kind of damage I think they are. I'm most concerned about the bacterial infection I've mentioned previously, Xanthomonas campestris, but I can't find a photo of X. campestris damage that looks like this exactly, so it might be something else. Maybe a fungus? I don't have the "fungus" square marked on my Anthurium Problems Bingo card yet.
2 It should be noted, too, that the color contrast is more pronounced in person. My camera sucks at picking up this sort of thing -- I had a hard time getting a good shot of the brown/green veining on the spathes of 0330 Faye Quinette and the red/green veining on spathes of 0371 Deb Autry as well.
Posted by mr_subjunctive at 3:00 AM