• 0598 Fala Roma just kind of withered and died over nothing in particular, a few days shy of its first birthday.
• 0600 Enzo: same thing, though Enzo made it to twelve and a half months.
• 0633 Karin Webb got too dry at the age of eight months.
• 0678 April Carrión had pretty nice foliage but grew really slowly, and after waiting more than two years for her to do something and having her still be tiny and stunted, I reluctantly gave up on her.
• 0679 Victoria de los Gays reached fifteen months of age but then self-destructed.
• 1193 Neil Burgess also spontaneously fell apart after about eight months.

So they were an unusually weak group of seedlings. I didn't even get the chance to discard any of them for scale infestation, is how weak they were.

Butta did better than the others, by virtue of not dying, but he didn't wind up being good: 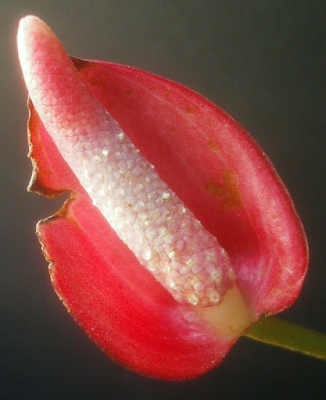 And the foliage has been consistently terrible. 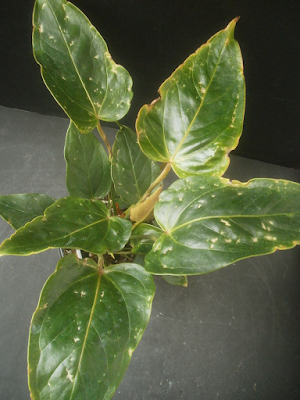 There's a second bloom developing as I write this; we'll see if it's better, but I can't imagine what inflorescence would be good enough to make up for the leaves. So Butta's all but certain to be gone in the next purge. I'm not even positive that I'll wait for the second bloom to develop.


1 I was surprised to lean, when I did the post for 0317 Dred, that "Butta" is the name of a drag king, not a drag queen. I suppose it works in either case -- we may gender vehicles, clothing shapes and styles,, leisure activities, employment, and wavelengths of light, but not (yet) our dietary fatsa -- but it seemed so obviously a queen's name that I didn't even bother to check. I just happened to see it on a list when I was looking up Dred.
a Look for my upcoming book, Butter is From Mars, Margarine is From Venus, Olestra is From Uranus, in bookstores in February 2018.
2 I have to say "confirmed" because I suspect that a number of seedlings from the BF and BH seedling groups, as well as the occasional seedling from other groups, have 'Krypton' as the pollen parent. The only way that I could confirm that, though, would be to have a paternity test run, and I don't care enough to try to figure out how to do plant paternity testing and probably couldn't afford it anyway.
Posted by mr_subjunctive at 3:00 AM