Another low-quality seedling. The bloom color isn't the problem. It's nothing new, but I like it anyway -- 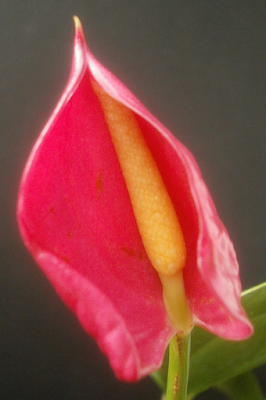 -- the problem is more that Tina's sloppy in the execution. This spathe color shows thrips damage really well, 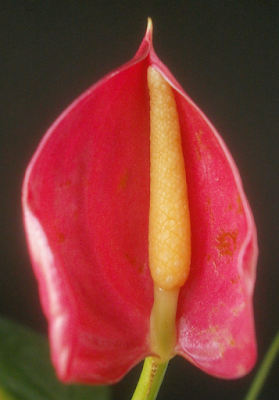 and it became even less interesting and less attractive with age. 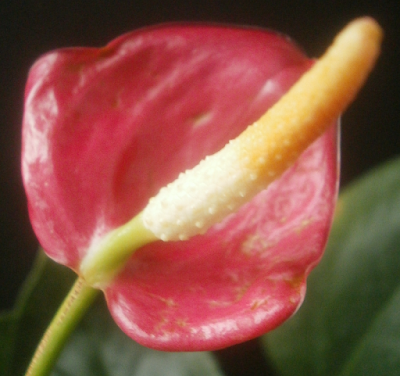 The foliage was mostly okay, though that spot on the side worries me.1 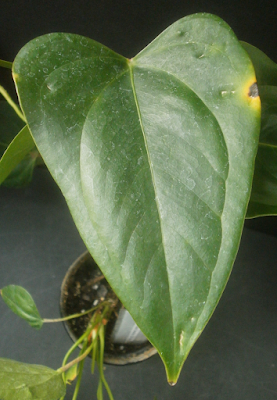 Tina's also gotten pretty floppy. The internodal distance isn't huge, but it's longer than I'd like. And since this picture was taken, she got dry a couple times and dropped some leaves: 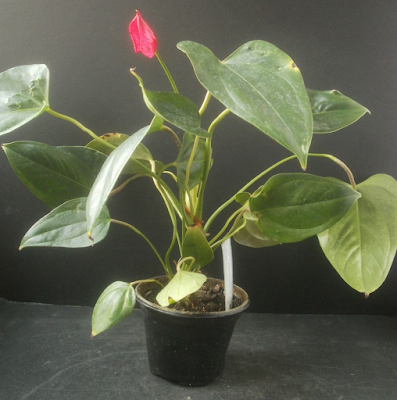 So I'll give Tina time to make a second bloom, but she's probably not a long-term keeper.


1 There are bacterial Anthurium diseases that can look something like this, most notably Xanthomonas campestris pv. dieffenbachiae (which might technically be X. axonopodis at the moment, but campestris appears to be the more established name, and consequently the better one for internet searches). The bacteria often invade the hydathodes, on the leaf margins, first, and spread from there into the main veins.
I'm not necessarily worried about this specific spot on this specific plant, but I've been noticing some spotting show up lately that hasn't been as widespread before, and a few plants have been showing symmetrical spotting, which is super troubling.
Bacterial diseases are often spread via water droplets splashing from plant to plant, which I've been doing more of lately, because it seemed to be helpful for controlling the thrips. Since I started seeing the spots, I'm spraying less water around, but I haven't stopped entirely, and I slowed down recently enough that I don't know if it'll make a difference or not.
I do have going for me that X. campestris prefers warmer, moister air than we probably have in the house; this is probably not enough to prevent infection, but it should limit the damage and spread. If it's here in the first place. Which it probably is. Also newer varieties of Anthurium are supposedly more resistant to bacterial blight, and I imagine that the plants I started with are relatively new cultivars, so the seedlings should vary in their susceptibility. But who knows.
I don't know what happens if another pest/disease/problem sweeps through the plant collection, but if I have to deal with bacterial blight on top of the scale and thrips, I will be very tempted to throw them all out and take up a less aggravating hobby. I mean, I know I've said this before, and I still have a bunch of plants so it sure looks like I didn't mean it, but: however deep my love for the plants may be, it is probably not infinite.
Posted by mr_subjunctive at 3:00 AM