If you've seen the documentary Paris is Burning, you're familiar with the real-life Venus Xtravaganza. It's been a long time for me, so I don't remember much in the way of details, but I can at least recall that she seemed sweet. Not innocent, but . . . I don't know. Quiet. Vulnerable. Like someone you'd want to be friends with, maybe. See for yourself (*may not be safe for work*):

It's easy to forget, looking at Paris is Burning from the perspective of 2016, how terrifying it was to be gay back then sometimes.1, 2 How lonely. I'm approximately Venus' age, and in 1990 I couldn't have imagined there even being a place I could have gone where people could know I was gay and like me anyway. Where people would look out for me like family. So, when I watch that video, I'm slightly jealous, on the one hand, and on the other, I just ache to protect Venus. So tiny, so fragile, so sweet.

Which means that the ending, where you find out that she died shortly after her part had been filmed, and in a particularly ugly and horrible way,3 it hits you like a truck.

I didn't actually know her. Documentaries are shaped and framed to make people look one way or another way. I might not actually have liked her; she might not have liked me either. Who knows. But her story is tragic all the same, and while acceptance of gays is a lot further along in 2016 than it was in 1988, when Venus died, acceptance of transgendered men and women has barely begun to shift, in the last 10 years or so. And while it's appalling how comfortable Americans are with seeing one another killed, period, it's especially appalling that the justifications are so often explicitly bigoted.

After saying all that, I realize there's some mood whiplash in switching to talking about an Anthurium seedling, and even more whiplash involved when it's not even a particularly good seedling.4 But the seedling's the reason we're here, so let's just do the pictures: 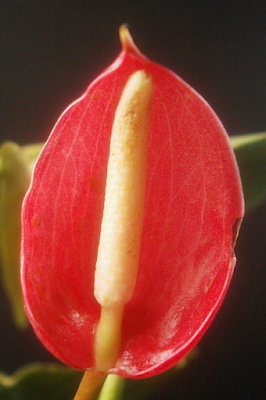 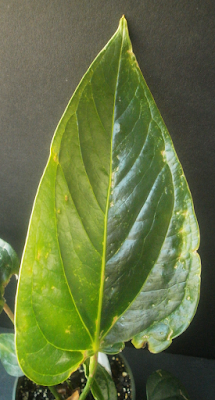 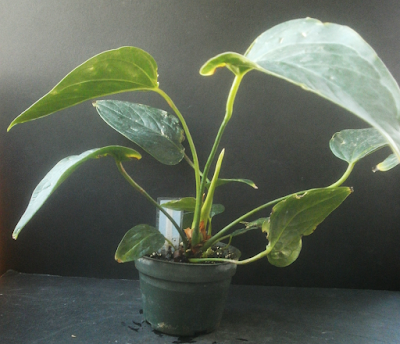 Boring color, thrips damage, no reason to keep. A pretty typical seedling from the BF group.

I hope the next Venus Xtravaganza seedling will be more worthy of the name.


1 Though Venus was transgendered, not gay, some of the others in the documentary identified as gay. They're very different things, but in 1990, when Paris is Burning was made, not many people bothered to make the distinction.
2 One of the startling things about watching Six Feet Under for the first time, in 2014, was recognizing myself in David's whole first-season dilemma about where to be out and where not to, the constant worry about what would happen if someone found out, and so on. Living where and when I do, I don't really worry about being out of the closet, even with people I don't know very well: there just aren't that many dangers anymore. But Six Feet Under started in 2001, and watching those first few episodes brought it all roaring back -- I started a new job in the middle of 2001, and spent a tremendous amount of time trying to decide who I could trust and who I couldn't, worrying about whether it would be a big deal or not, talking to friends in other states on the phone about whether to do it or not. It was intensely preoccupying, not to mention that it distorted my relationships with co-workers and casual acquaintances in ways which were probably not helpful.
3 I won't describe it here, but it's not hard to find out. Pretty much anything you read about her mentions it at some point or another. And violence against transgendered people is still appallingly common, as Wikipedia attests.
4 Just a reminder: the names are assigned well before I have any idea what the blooms will look like. Having one's name associated with a good or bad seedling is entirely the luck of the draw, and unless there's some compelling reason to keep a bad seedling around (e.g. unusual spathe color), I recycle the names.
The least lucky name so far is "Dawn Kekong," who's died five times -- 0102, 0315, 0664, 1054, and 1696. The name will come up again somewhere around seedling 2500, if I keep going that long.
Posted by mr_subjunctive at 3:00 AM

I ache for all the people who feel they have to hide part of themselves for fear of rejection or violence. I'm glad we're making progress as a country but we still have a long way to go. I support everyone being themselves: gay, straight, trans, asexual, science fiction nerd, sports fan, whatever.

I'm glad you're in a place where your (or you seem to me to be) comfortable just being yourself.