I'm bothered by this photo because of the odd-shaped brown thing just below and to the right of the flower. What is it? Why is it there? Why didn't I notice it at the time? 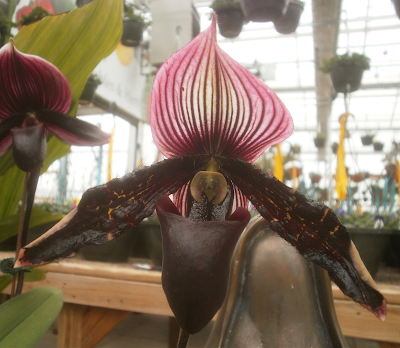 Magical Contrasts is another Lehua orchid, though they appear to have taken the page down from their website at some point between March and October. It used to read:

Classic sukhakulii shape and many with very dark petals. We used the Magic Pulsar to try to enlarge the sukhakulii pouch. It did not work, most have the classic pointed pouch. Not the greatest form on the one we photographed, but what color. This one has already been bred with!

I think this was the darkest Paphiopedilum from the 2016 show, though not the darkest one I've ever seen -- that would be Paphiopedilum sukhakulii x (Black Cherry x sukhakulii) from 2015. They're pretty similar to one another, save for the top ("dorsal") sepal, which is tan and black striped there and purple/purple here.