Miles resembles 0721 Chandelier Divine Brown, in that both have an exceptionally vivid color, practically glowy at times, that doesn't photograph particularly well. Miles started out as red, and slowly turned more to hot pink, while Chandelier is and always has been red, but they're both really intense colors, and stand out well against the leaves. So there's that. 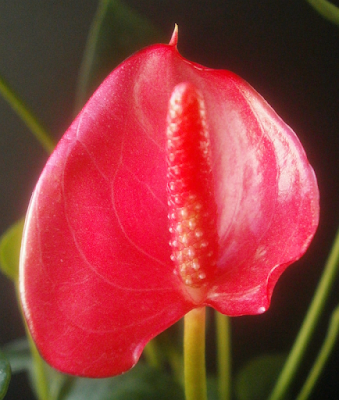 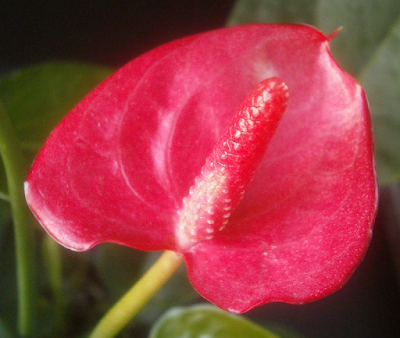 20 October 2016.
The foliage isn't particularly striking, but it's okay. Mostly clear of thrips damage, at least. 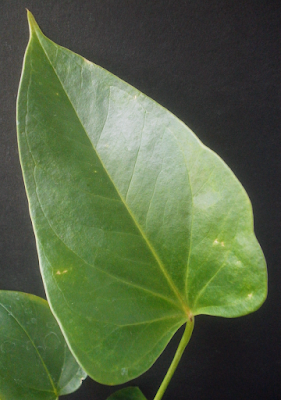 And it seems to be offsetting reasonably well for its age. 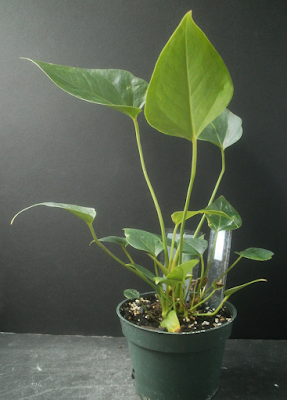 I'd be happier with Miles if his spathes were larger. That might happen with the second and third blooms, so we'll see. Even if this is as big as they get, though, he's still probably a keeper. The color really is quite striking in person, if nothing else.

While you're here, I intended to say something about this a long time ago, but I forgot, and now it's no longer relevant but I still want you to see it. The now-deceased 0335 Donna Fanuday produced this bloom a month ago: 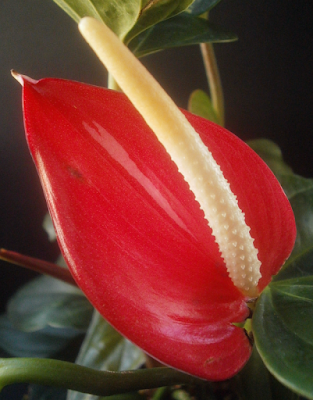 That lighter, pinkish streak near the center of the spathe isn't a reflection; the spathe actually did that. Just the one stripe, and it had never done this before, so I don't want to make too much out of it, but that could, hypothetically, be spontaneous speckling. (Donna's seed parent was 'White Gemini;' I don't know who the pollen parent was, but it couldn't have been 'Peppermint Gemini,' my one speckled parent variety, both because I didn't have 'Peppermint Gemini' yet when the seed that would become Donna was sown and because I'm pretty sure 'Peppermint Gemini' doesn't even produce pollen. The pollen parent was probably the NOID red.)

We'll never know, of course. Donna had been doing really well for a long time, but then a bunch of scale appeared out of nowhere. I thought I'd beaten them back with imidacloprid earlier in the summer, and it'd been a while since I'd seen any in the basement, but they came back, and there were so many of them that I thought it better to sacrifice Donna than to leave the scale to roam and spread themselves while I tried another round of pesticide. Donna had reproduced already (no official seedlings yet, but I have a bunch of her seeds in the basement in germination containers), so if I'm extremely lucky, maybe one of her offspring will pick up some of her better traits (nicely-shaped blooms, decent thrips resistance, lots of blooms, long-lasting blooms, strong but common color, fantastic new leaf color1) and do some spontaneous speckling besides. I don't expect it to happen. I'm not even sure it can happen. But maybe. We'll see.

I have so many Anthurium seedlings that I don't ordinarily care much when one dies, but Donna is missed.

I do still have a couple seedlings with slightly variegated leaves. They probably won't produce variegated spathes, and in fact I suspect that the variegation probably means they're sick in some way or another, but 0405 Crickett Bardot is hanging in there anyway: 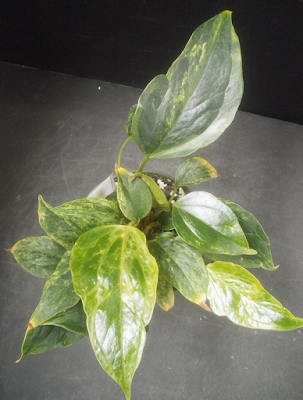 24 May 2016.
Her most recent leaves, produced since that photo, appear to be reverting back to solid green, alas. And there's still no indication that she's even thinking about blooming, despite being three years old.

A few much more recent seedlings have done things sort of similar; 1415 Sister Dharma Gettin is producing leaves which are basically normal in texture2 but have the same speckling on them. Sister Dharma is even more interesting, though, because her new leaves are orange:

I'm not sure I'd even like a speckled bloom or variegated plant if I could get one: from a distance, they tend to just look kind of dirty or faded. But it'd be interesting to have one or two around anyway, just because. 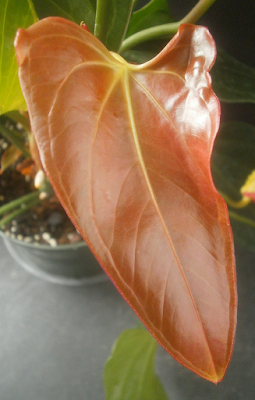 2 0405 Crickett Bardot and some of her (deceased) variegated siblings' leaves were thicker, and often kind of . . . I don't know how to describe it exactly. Blistered? They weren't blistered in the ways that Anthurium spathes are sometimes blistered, where the larger veins are sunken relative to the rest of the leaf; it was more like the areas of the leaf with lots of variegation also grew slower than the rest of the leaves, so the variegated parts were slightly puckered. You can kind of see it in places in the photo of Crickett.
Posted by mr_subjunctive at 3:00 AM