Time to check in with the Polyscias seedlings again. When we last saw them, in May, there were 11 seedlings in all, and they were about 7 months old.

They are now one year old, and three of them (5, 7, and 11) have died; one more (10) is a bit shaky, but still technically alive. I've moved all but one of them (#10 again) to 4-inch pots. The differences in their leaves are now pretty well-established, and I'm thinking that may be as pronounced as those get; instead I'm focusing more on differences in the overall plant shape, and their ability to retain their leaves. So let's take a look. 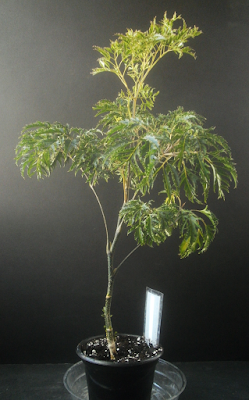 #1
Seedling 1 has nice leaves -- finely-divided, with good color and well-defined midveins on each leaflet. It doesn't seem to have great leaf-retention skills, though. There's a side-shoot barely visible near the bottom of the trunk here, but it doesn't seem to be going anywhere. I'd take the growing tip off the top if I thought it would help, but since there's only the one side shoot, I imagine I'd just replace one tall, bare-trunked stem with another. Not the worst of the survivors, but I'm disappointed; it looked really interesting in May. 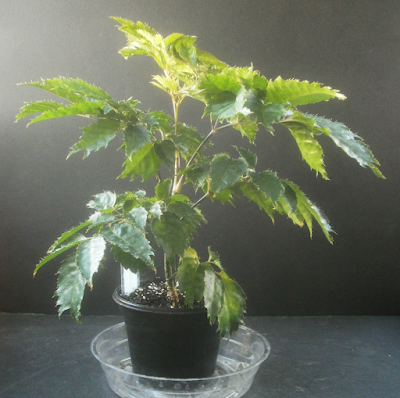 #2
Seedling 2 was my favorite in May, and it's still doing well in October. I worry a little bit about it, in that it's not as tall as some of the others, and it's dropped a couple leaves since this picture was taken, but it sure seems to have a lot more light-collecting area than the other ones, 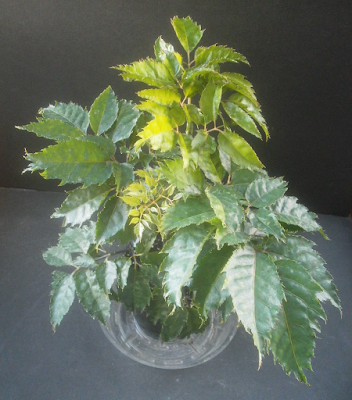 also #2
so I'm hoping it will be all right. #2 is the only one I really care that much about, so keep your fingers crossed. 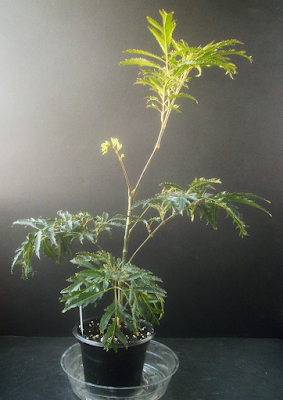 #3
#3 has darker, flatter leaves than most of the seedlings did. In May, I liked that, but the flatness of the leaves makes it harder for the plant to look full in photos, it isn't branching either, and the petioles are all pretty long. It's okay, but unless it starts branching, I'm not expecting much to come of it. 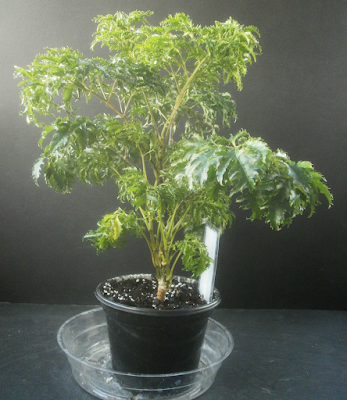 #4
Number 4, on the other hand, has really thick, fluffy leaves, holds them well, and has already branched at least twice. It looks enough like the parent plant that I find it difficult to get excited about, but even if it's not that original, it's still a nice-looking plant. 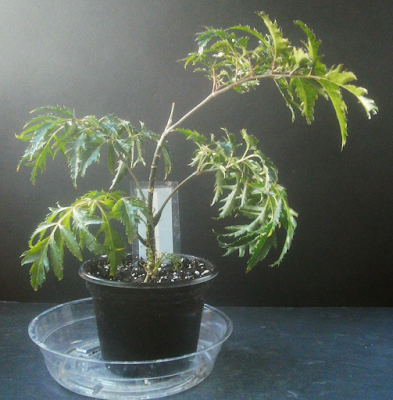 #6
Seedling 6 is trying to branch, and might get there eventually. It looks kind of bare here because the newest leaf got partly broken off in the process of development, so there's just a petiole stump where there ought to be a leaf. 6 doesn't do much for me either, but it's trying. 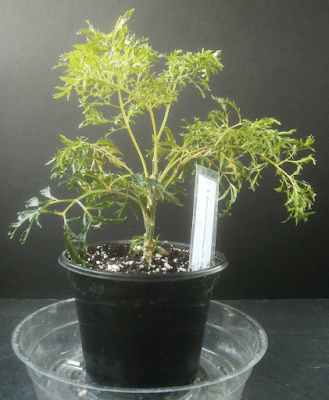 #8
Number 8 is the one with the really, really narrow leaflets. They're so narrow that they've become kind of a problem, actually: they get tangled in themselves, and then tear when I try to straighten them out. It doesn't strike me as pretty, still, but it's dense, it's branching on its own, and it's different from what I started out with, so I'm pleased. A plant that actively tears pieces off itself when the wind blows probably doesn't have much potential as an outdoor landscaping plant, but that's not as big of a problem indoors. 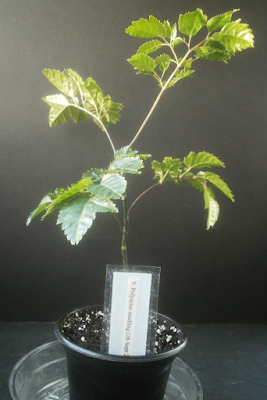 #9
Number 9 is the one where a couple of the leaves suddenly developed a bunch of yellow spots and then dropped off; I figured it for an overwatering error at the time, and I don't have a better guess now. It hasn't done it again, though as you can see, there aren't many leaves, the leaves it does have aren't very interesting, and there's a lot of space between the leaves, so it's not likely to ever become my favorite. 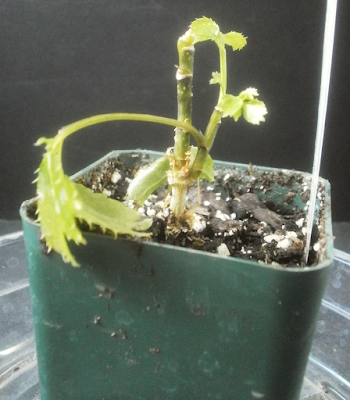 #10
And then, finally, number 10, the only one that hasn't been moved up to a 4-inch pot yet. It was growing along okay for a while, and then the growing tip died and all the leaves fell off. It started a new growing tip from the side, but that doesn't seem to be doing so hot either, and it's so much shorter than all the others that it has a tough time getting any light, so I imagine #10 is going to be dead before the next update.

I don't know if I trust these enough to give them names quite yet, but it would be sort of nice to have something to call them besides numbers. I have an idea for a series of names but part of my brain is like, no, Jesus, that's a really bad idea, don't do that, so if you have suggestions, I'm listening.

Working on a PhD about Araliaceae , I found your blog as one of the first results during a research for Hedera species and I am now excited to read about Polyscias - which is one of my favourite Araliaceae at the moment and I own a huge one at work since one year. As I just recently made numerous cuttings, I am interested in seeing how your young Polyscias plants develop and if mine will do fine as well :-) As for naming: I tried to name my plants and even though I agree that plants ARE the strangest people and I develop quite a relationship to every single one, giving them names was never satisfying and I stopped. Alma the avocado is the only baptized plant I own and I will keep it that way...

How about famous squirrels? Sciurus are shade-tails, Polyscias are many-shades.

Or take the other part and have a series of famous polyamorous people.

I was reading about this plant on Wikipedia and saw that it's eaten in Thailand. Maybe you should just eat the ones you decide not to keep. I can ask my Thai friends for recipes, if you like.