This one is a little different. 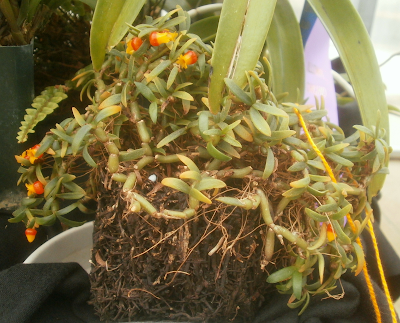 I don't want one of my own, because orchids and I just do not get along at all.1 Even if we did, Mediocalcar decoratum is poorly-suited to living in the house. It's native to the cloud forests of Papua and New Guinea, which means lots of moisture and cool temperatures. 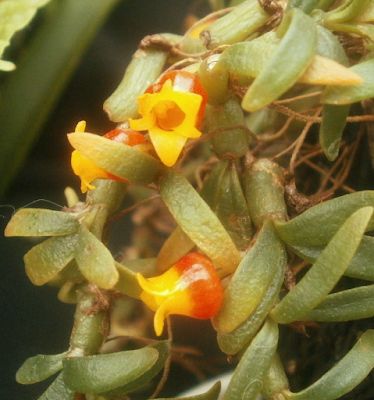 The flowers reminded me of Manettia luteorubra (candy corn plant or candy corn vine), which I occasionally see in stores around here, as an outdoor annual, which has blooms of similar size and coloration, though the shape on Manettia is long and tubular. I thought maybe the similarity could be explained by having a pollinator in common, but apparently not: though there seems to be a lot of confusion as to what species of Manettia it is, everybody agrees that Manettia is a New World family, and I doubt Manettia and Mediocalcar have the same pollinator, considering that they're separated by the whole Pacific Ocean.2

Much better photos of M. decoratum can be found here.


1 In fact, I've recently thrown out two orchids I'd had for a really long time -- a NOID Dendrobium and a Brassolaeliocattleya Helen Brown, both from October 2008 -- because eight years was long enough. The Dendrobium had bloomed before, so I know it was capable of it; the Brassolaeliocattleya was small when I got it but I felt like it was surely blooming size/age by now. The Dendrobium had been dropping leaves for a few months; I think it was probably unhappy with the watering frequency. One big leaf on the Brassolaeliocattleya turned half black basically overnight, and I have no idea what caused that: the only thing I can think of that had changed for it in the last year was that I changed its growing medium (replaced old bark chips with new bark chips, same brand and everything).
Had I held on to them for a few more months, I could probably have stuck them outside next summer and gotten blooms. And maybe I should have. But the reasoning was basically, 1) if they could bloom in the house for me, they would probably have done so already, 2) I've gotten no enjoyment from either of them for a few years now, 3) it looks like they're beginning to fall apart, and 4) I need the room for Schlumbergera seedlings.
So far, the only exceptions to the "orchids and I don't get along" rule are Phalaenopsis, which pretty much likes everybody (despite which it still only tolerates me), and Neofinetia falcata "Amami Furan," which actually seems to like me, and vice-versa.
2 Not that it still couldn't happen; both are believed to be pollinated by birds, and birds do get around. But there are probably not many species of bird living on opposite sides of the Pacific Ocean. Though I suppose there could be different species of bird from the same genus on opposite sides of the ocean, where both kinds of bird really like tiny, yellow-tipped orange blooms, in which case the Mediocalcar / Manettia resemblance could be an example of convergent evolution. I couldn't find a source that identified the species of bird responsible for pollination for either flower; it's possible that we don't actually know.
Of course, the whole thing could be coincidence, too. Only so many colors out there, and so many ways of arranging them: given enough species with flowers, some repetition is bound to happen.
Posted by mr_subjunctive at 3:00 AM

1) I agree. I've decided orchids, while spectacular when in bloom, require high effort to get there. More than I'm willing to put in without a greenhouse.

2) Bird pollinators in the "New World" tend to be hummingbirds. In the "Old World" they tend to be sunbirds. Both groups have long, often curved bills but they aren't closely related. So, yeah, convergent evolution occurred in the birds so it makes sense it happened in the plants, too.

In South-eastern Brazil "Three species of hummingbirds are the major pollinators of the flowers of M. luteo-rubra at the study site: the hermits Phaethornis eurynome and P. squalidus, and the trochiline Thalurania glaucopis. Three species of Heliconius butterflies act as minor pollinators." The first two are the dullest hummingbirds of which I have ever seen photos. The fabulous Thalurania glaucopis makes up for their drabness. As far as I know all Heliconius butterflies are spectacular.
http://onlinelibrary.wiley.com/doi/10.1111/j.1438-8677.1995.tb00499.x/abstract

Apparently the sunbirds in New Guinea are restricted to the lowlands and the logical pollinators of Mediocalcar species (though unobserved) are the honeyeaters (Meliphagidae). This paper also highlights convergent evolution: ""Certain neotropical Gesneriaceae as well as species of Aloe and Erica from southern Africa possess flowers which are similar to Mediocalcar in being urceolate and strikingly bicoloured. Most of these are known to be ornithophilous." In a list of ornithophilous characteristics the author includes : "vivid colours, often scarlet or with contrasting parrot-like colours;".

The Ginger family are vastly easier and often as spectacular as orchids.

How do you find these things? I can never find this kind of stuff on-line.

Hi! Do you have a list of houseplants that do well in low light? Or maybe even just a couple recommendations? (Not pothos - I have those) Our house is quite dark (plus it's becoming winter in our part of the planet). Thanks!!!

It's not exactly what you're asking for, but low light was part of the environment I was assuming for the list I did of plants that work reasonably well in offices.

Should note for the record that although most of the plants on that list will stay alive in low light, many of them won't actually grow very much. A lot depends on what you mean by "low."

Google Scholar cuts out all the nutters who haven't got degrees, just leaving the ones that do. Remember to switch off the "include patents" box, unless you like cranks, creepy cashing-in and weird inventions.

If there is a link at the right starting [PDF] it often takes you to the full article .pdf for free, unless it is researchgate.net or academia.edu who usually ask you to register with them. The only one I have registered with is JSTOR who have a weird system where you can put three articles on your bookshelf and after a set time you can replace them with others. They have never sent me any spam. They have a wide range of interesting plant stuff.