Out of bloom, most commercially available Schlumbergeras look more or less identical. 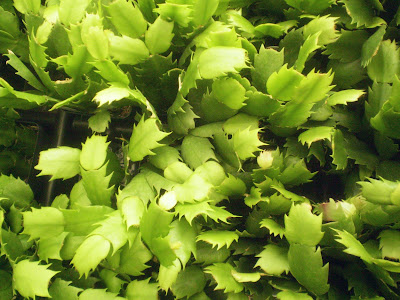 Approximately rectangular, with a deeply serrated margin. We've all seen it.

So I was curious about what the seedlings from Schlumbergera x buckleyi were going to look like, since buckleyi has several traits that distinguish it from the others: the notches in the stem segments are very shallow, the margin between the notches are rounded rather than coming to a sharp point, the overall segment shape is narrower (sometimes with a triangular base), and the habit of the plant overall is much less upright than the S. truncata hybrids. 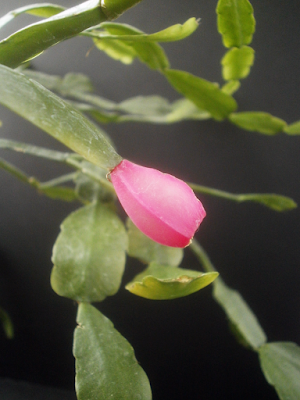 This photo was originally taken to highlight the shape of S. x buckleyi fruits, but it works well enough to show segment shape. For what it may be worth to you, perfectly round, smooth fruit is more the exception than the rule, and a number of my seedlings can make "ribbed" fruits like this, though most of the seedlings that do this make 'em round sometimes and ribbed other times. As far as I've seen, buckleyi fruits are always ribbed.
The 28 buckleyi seedlings I started in March 2015 are now producing mature new growth, and it's pretty easy to tell the difference between a group of them and a group of other seedlings of different age, though some of the buckleyi seedlings overlap the others enough in appearance that I don't know that I could accurately pick out the 10 buckleyi seedlings in a group of 30 seedlings. 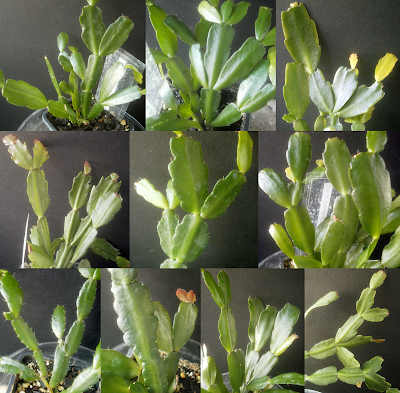 Top row, L-R: 261, 263, 270
Second row: 273, 274, 275
Bottom row: 260, 268, 276, 277
(It may help to view the photo full-size.)
As you can see from the picture, they're all making attempts at marginal serrations, similar to x buckleyi, though the shapes vary. 274, 260, and 268 have scalloped (crenate) edges, that make the segments look something like a child's drawing of a cloud; most of the others are half-assing it, putting occasional slight waves in the margin without a sharp indentation. They also mostly take after x buckleyi in having longer, narrower segments than usual.

I haven't investigated whether the drooping habit is inherited or not; most of them are still small enough that they'd be upright even if genetically programmed to droop. 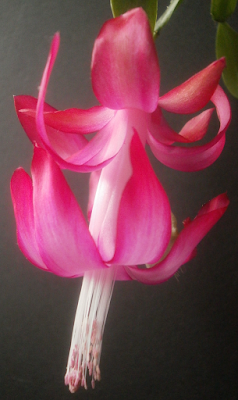 -- and I will be excited to see whether it transfers to any of the offspring, but they'll have to bud up first, and there's a substantial obstacle in the way of that happening. Buckleyi is exceptionally picky about having long, perfectly dark nights, and will not set buds otherwise. In some years, I've gotten no blooms at all from my two buckleyi plants; last year I got maybe ten flowers overall, mostly in the spring,1 and I had to put the flat on a low shelf in the plant room, remove an artificial light from a couple shelves above, and pile up a bunch of plants in front of the buckleyi to block the light, in order to get even that many.

So far, only three of the buckleyi seedlings have moved into the plant room (#s 256, 271, and 272), and none have tried to bud yet. This doesn't necessarily mean that they're going to be fussy about dark nights too -- only about a third of the seedlings capable of producing a new first bud have done so,2, 3 and it's still very early in the season -- but it's not an encouraging sign, either.

In any case. I don't necessarily like the stem segment shapes from this group of seedlings (though 268, one of the "cloud" ones, is intriguing), but they're distinctive enough that I'll probably be able to tell if x buckleyi was the pollen parent for any of the future batches of seedlings. Which will be nice.

I'm thinking about trying to make deliberate crosses this year, if I can figure out how to identify which are which: I have so many random crosses from last year that I don't even have space to start all of the seeds, much less enough space to pot up all the seedlings that result,4 so I either have to switch to specific, deliberate crosses, or convince the husband to add a second basement.

Finally, I wanted to share this picture of seedling 354, because I was impressed with how much branching it thinks it's going to be doing: 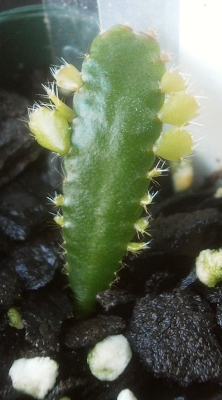 354 is a second-generation seedling (seed parent: 082A Strawberry Madeleine), and the photo was taken when it was about two weeks shy of being a year old.


1 Though x buckleyi tends to bloom later in the year than the S. truncata hybrids, and is therefore more deserving of the name "Christmas cactus," they don't have to bloom in late December. The few dated photos I have of mine are from 27 November, 1 December, and 15 February, and I'm pretty sure that my buckleyis were blooming late into the spring last year, after most of the other schlums had stopped. I just wasn't taking their pictures anymore, because by that point I was pretty sick of taking Schlumbergera pictures.
2 By contrast, it seems like all of the seedlings that bloomed in previous years have budded up already; as I write this on 27 October, three have even opened a bloom already: 025A Clownfish, 034A Wahine, and 082A Strawberry Madeleine. Two more (033A Clueless and 057A Pyrotechnic) will have a bloom open by the time you read this.
3 Of some interest, perhaps: one of the second-generation plants (seedling 239) is budding. Its seed parent is 025A Clownfish; I have no idea what the pollen parent was.
4 A very rough headcount of all the Schlumbergera berries suggests that I probably have about 125 ripe berries at the moment. Each berry produces an average of about 80 seedlings (also a pretty rough guess). That means that I have something like 10,000 potential seedlings from ripe berries, on top of the 2000 or so seedlings still in the germination containers.
With the Anthuriums, it's been (somewhat) possible to cross them randomly and start every seed I get (though I'm actually starting to get picky about which seeds I sow and which I let wither on the spadix), because a lot of the seeds fail to germinate, or the seedlings die or are discarded for one reason or another, each individual bloom doesn't produce very many seeds (The record is 121 on a single spadix from 0239 Russ Teanale; average seeds per spadix is closer to 20-25.), and each individual plant doesn't produce that many blooms. None of those apply to Schlumbergera, which virtually all germinate, live forever once germinated whether I pot them up or leave them in the germination containers, produce many seeds per bloom, and bloom several times per season.
Posted by mr_subjunctive at 3:00 AM

The Schlumb in the North said...

Oh 354, you sweet summer child. It doesn't know that the winter is coming. Again.

...but, on the other hand, I really like a Schlumbergera with ambition.

Thanks for your sharing your notes and trail. Really interesting.
Do you have updates one year later on your seedlings?

Well, I'm hoping that some of them will bloom this year (one of them did bloom last year: 271A Not Here To Make Friends), but other than that, not really: the stem segments continue to do more or less what they were doing in these photos, just on slightly larger plants. I'll try to remember to revisit the subject if I get new blooms this year, though.

Really exciting. So funny that it's very suited named plant who is going straight to business!
Really love the different characters.